The May 2012 Theme was to build any subject with a shark or shark mouth motif or related to a shark in some way.  Examples are a Blackburn Shark (been there, done that), any various aircraft with a shark mouth, SS-174 USS SHARK, a P-3 Orion of VP-6 "Blue Sharks"...you get the picture.

I wanted to make that FAA Seafire IIc with the shark mouth, or even the RAAF Spitfire VIII but decided to step out of my Spitfire phase and do a traditional P-40.  Okay, not too traditional as I did NOT do the typical AVG bird.  I've got 3 AVG Tomahawks already, two of which are not very good but one which I'm quite happy with (Hobby Boss kit).

The Tomahawk I represents the 140 H81A-1, which is generally similar to the P-40-CU.  Ordered by France with French guns, and other internal systems; this lot was taken over by Britain when France fell in 1940.  The major external differences are a single gun in each wing and the fuselage gun barrels protruded further.  British serials AH741 to AH880 apply.

The Tomahawk IIa is the British equivalent of the P-40B.  British serials AH881 to AH990.

I suspect there may be other external differences, like radio masts and antenna wires, but I have not found a reference to indicate what those may be.  If I do I'll update this portion.  None of the photos I have of British Tomahawks show different antenna configurations, so at this point I assume they are the same.

In my stash I had 2 of the venerable Academy kits of the same subject.  I decided to build one of the new Airfix and the old Academy; and do them side-by-side for a comparison. 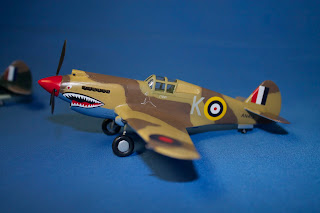 112 Squadron RAF is generally credited with initiating the shark mouth motif on the P-40 line.  The Luftwaffe actually had a Gruppe of Bf-110's during Dunkirk that was sooner, and I think I have some photos of a Bf-109D from 1939 with a shark mouth.

112 Squadron got their Tomahawks in July 1941 in Egypt.  They came to them painted in the then-standard scheme called the Temperate Land Scheme of Dark Green and Dark Earth over Sky undersides.  After a few weeks of operations the squadron repainted the Tomahawks in the Desert Scheme of Middle Stone and Dark Earth over Azure.  For identification the aircraft had red spinners and no fuselage bands on either scheme.

Both subjects have the shark mouth motif, as well as some other squadron identifications on them.

The colors of Dark Green, Dark Earth and Sky as used on Tomahawks is the subject of debate.  I am quite happy with the colors described by Nick Millman on his blog; generally there is agreement that Curtiss used Dupont paints 71-013 for Dark Green, 71-065 (or possibly 71-009!) for Dark Earth and 71-021 for Sky.  Ultimately I chose paints that appear very close to these colors as depicted on Nick's blog.  I will not enter into any debates on what color Dupont 71-021 is, some believe it to be a bluish gray, others a greenish gray.  It's your model, paint it they way you want it.

Between Britmodeler, my books and some other forums I read occasionally, the Desert Scheme for these aircraft was achieved by simply overpainting the Dark Green with Middle Stone and the undersurface with Azure Blue.  As these are standard RAF colors, I used paints which approximate the reference chips I have, but left the Dark Earth color the original 71-065.

The models
Simply put, the Airfix kit is a dream compared to the Academy kit.  Okay, the Academy kit is crude and a very easy build.  If it's the only early P-40 on your shelf it'll look the part, but set it next to the new Airfix, Trumpeter or even the Hobby Boss kits, it looks toy-ish and crude.  Best used as a pallet or as a toy for your young modelers-to-be. 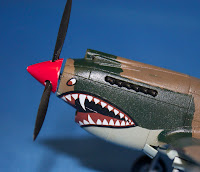 What's wrong with the Academy?  The prop spinner is too large, making the prop look small (it isn't).  The nose is over thick as is the fuselage in general.  The tail is thick and too deep.  There is no detail in the cockpit or wheel wells, the guns and pitot are just stubs and the canopy is all wrong.  But other than that, it sort of looks like an early P-40.  I remember first seeing it back in the 80's when it was first released and thinking, "Finally!  An early P-40 I can put in my display."  There was a reason I didn't build a second one until now...

The Airfix kit is beautiful.  Not only does it look the part, but it has good detail in the cockpit, the wheel wells are accurately displayed, the nose, wings, fuselage and tail are all delicate and well detailed, providing both that rugged look of the early P-40 in a more scale-like appearance.

Okay, enough gushing...the parts are very delicate.  I broke a few trying to remove them from the sprues and used my razor saw at that.  The plastic is soft, so care must be taken while working with it.

For the Airfix kit I decided to model Tomahawk IIb, AK367/C, 112 Squadron, RAF, Sidi Heneish, Egypt, Summer 1941.  The scheme is Dark Green, Dark Earth and Sky, as delivered by Curtiss.  The paints I used to mimic what I believe these colors to look like were:

I used the decals from BarracudaCals sheet 72005.  They laid down great with just Micro-Sol and floated well on water so working with the decals was easy.  After the decals had dried fully I put a final coat of Future mixed 10:1 with Model Master Acryl Flat Clear.  Just a drop in my airbrush cup with the Future is enough to give a satin finish; any more and it takes on a very flat sheen.

For the Academy kit, I modeled a Tomahawk IIb, AN413/K, 112 Squadron, Egypt, October 1941.  According to the decal sheet I used, it was piloted by Pilot Officer Jack Bartle, an Australian.  The scheme is the Desert Scheme of Dark Earth, Middle Stone over Azure Blue; another source indicated these aircraft were repainted locally so the Dark Earth was the original Dupont color.  The paints I used to mimic these colors were: 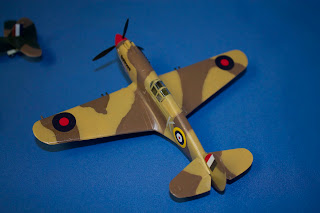 I used Sky Decals P-40 sheet 72 058.  Again using just Micro-Sol they went down well, however the decals are sized for either the Trumpeter or HobbyBoss kits as they have a smaller and better shaped nose.  The shark mouth decal is too small for the Academy kit.  I also made a slight mistake with the fin flash but some minor paint touch up will fix that.  Overcoated with my Future/Acryl mix for a satin sheen.  I'll replace this one someday with an Airfix kit.

Summary
For the money, they Airfix kit is the way to go.  While you can pick up an Academy kit for less than $5 at shows, the Airfix kit is only another dollar online and makes into a much better model.  If you were to buy or scratch the necessary upgrades to make it look as nice as the Airfix, the Academy would cost much more.

I also have a Trumpeter and HobbyBoss Tomahawk II.  The Trumpeter is over engineered, consisting of too many parts.  It does build up nicely, but takes putty to clean up the nose seams as it's made up of 2 additional parts to get the guns and intakes right.  Airfix did this right.  It's 2-3 times as costly as Airfix so I don't recommend it.

The Hobbyboss is the Easy Build kit, and it WAS easy.  It's "not quite right" with a panel raised and a bit of detail off.  About the same price as Airfix and it alone can replace your stash of Academy P-40's. 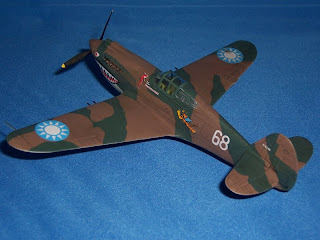 Thanks for reading.
Posted by Tim Holland at 2:37 PM