The Theme of the November meeting was "Your First Model".  While there were lots of great "My first model" stories, a few of us were able to bring the models along as well.  While none of them were the actual "first model", they were reproductions of our first kits, and were certainly built in the spirit of the theme. 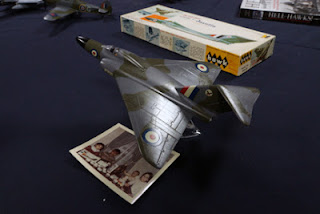 Our first subject for the monthly theme is the Hawk Gloster Javelin built by Tim Holland, which was featured in his monthly theme column. 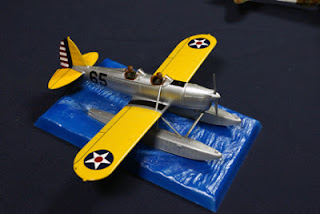 Next up is Nate Swift's 1:48 Testor's PT-20.  Nate built this model as the Dutch floatplane version, but in US Army markings, just as he had done as a kid. A considerable amount of time was spent cleaning up seams with various grades of polishing cloths to make sure the seam didn't show through the metallic finish.  Nate also tried out the Tamiya thinner technique for setting the decals, and he says it worked out very well, especially on the rudder stripes.  The OOB build looks great sitting on the kit included water base.﻿ 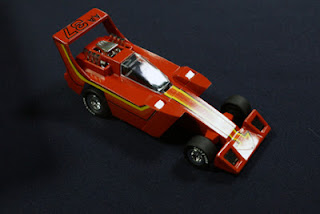 Our final theme model is this MPC 1:32 Futuristic Dragster Snap kit was built by Dave Fuller. Dave painted the model Testor's Italian Red to better match the original color of the plastic in his first kit instead of the yellow plastic that this example was molded in.
Moving on to our normal Show and Tell subjects, we have two models by Austin Whiteside. 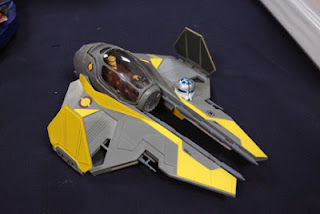 First we have the Revell 1:24 Jedi Starfighter, complete with astromech droid and figure of Anakin Skywalker. 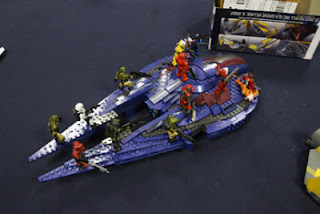 Austin also brought along his Megablocks model of a Covenant Seraph from the popular video game series Halo.  It's always nice to see something out of the norm, and Austin never fails to disappoint. 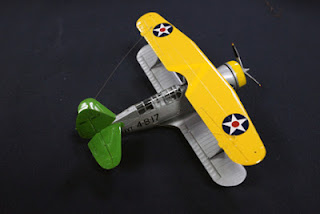 And while we're on the subject of the Whiteside family, we have this beautiful little Heller 1:72 Curtiss SBC-3 Helldiver built by Gerry Whiteside.  Gerry built the model OOB with Starfighter PE rigging and a combination of Microscale and  Starfighter decals to portray an aircraft from VB-4 Tophatters to contribute to the Museum's Tophatter Squadron build. 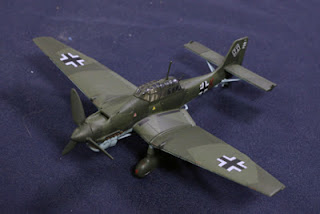 Continuing in 1:72 scale we have this very nice Ju-87C built by Ken Kelly.  Ken started with the Airfix kit of the Ju-87B, and started his conversion by clipping about 3/16" off of the wingtips to transform it into the carrierbourne version of the venerable Stuka.  Ken also scratchbuilt the tail hook as well as internal structure to the radiator.  To top it off, Ken sanded off all of the heavy raised details, thinned the overscale control surfaces and completely rescribed the model.  Ken continues to claim that his models are brush painted with Polly scale paints, but I think he's been using an airbrush all along. 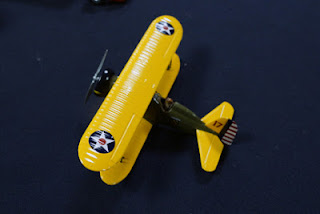 Rounding out the 1:72 builds is this Matchbox P-12E built by Dave Fuller.  Dave originally intended to have this model completed for the Matchbox theme, and then the Between the Wars theme, but managed to miss them both.  The kit was built OOB with Starfighter Decals representing an aircraft serving with the 16th Pursuit Group in the Canal Zone, circa 1934.

We finish out the Show and Tell with a trio of 1:48 models built by Joe Hegedus. 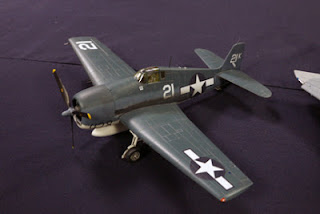 In a somewhat uncharacteristic move, Joe brought along this decidely non-glossy sea blue, F6F Hellcat.  Joe started with the Hasegawa kit, applied the striking tri-tone scheme, and then went further into uncharted territory and applied some very subtle weathering over aftermarket decals. 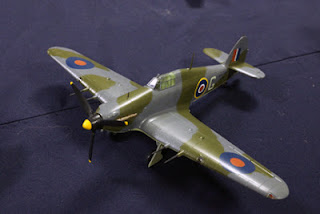 Joe continued this non-glossy sea blue trend with this very nice Sea Hurricane Mk. II.  Like the Hellcat, this was built from a Hasegawa kit with aftermarket decals. 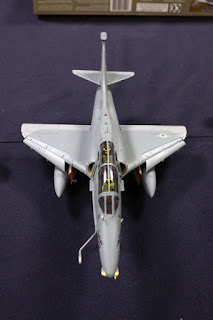 Rounding out this Show and Tell update is Joe's very nice Monogram OA-4M Skyhawk.  No, that isn't a black and white picture, we actually have a third non-GSB build from Mr. Dark Blue himself finished in the standard gray over gray lo-vis scheme found Skyhawks from this era.  Joe added outer weapons pylons from a Hasegawa A-4 to complete this otherwise OOB build.
That's at least three months now that we have failed to see an unweathered, factory finish clean, glossy sea blue model from Joe.  On top of that, he has actually been seen bringing British and Japanese subjects, a sailing ship, and even (gasp) a car!  What can this be attributed to?  Is there a worldwide shortage of Testors no. 1717?  Has the news of the demise of the Twinkie gone to his head?  Is it yet another sign of the coming apocalypse?  We'll find out next month, same Bat time, same Bat station.
Posted by David Fuller at 9:49 PM No comments:

The Taming of the Sprue

The beauty of the internet is that I can be a part of a community anywhere on the planet.  Whether that community is aviation maintenance, Navy, family, or Small World, today's internet forums allows all of us to participate and feel as though we are still there.

Like most members of SMSM, I participate in forums that bring together people with like interests from across the globe.  In turning over Small World to Chuck I am realizing I can still be a part of SMSM and Small World, even though I won't make monthly meetings for some time to come.  I'll miss the barbecue...

I'll also miss the peanut gallery.  The best part of show-n-tell are the comments; all are fun and most are helpful!  Of course, eyeballing a bunch of models built to a much higher quality than my own makes it even better; and helps to motivate me on that next project.

Since I'll be in the land of the Bard, and attempting to cut some sprue while I'm there, I hope to update you on shows, kits, and hopefully publish a few photos.  I've nearly got a Spitfire planned for each theme, and there are some new Spitfire releases for the new year so I hope to scoop some reviews.  If I can figure out an "aggressor" Spit, I'll have it made...maybe a whiff?

So while I'm away, if anyone brings a Spitfire, think of me.

See you all at the Christmas Party.


There are things that keep coming back, like a boomerang. Then there are things that won’t go away, like a bad penny. As I return to the position of Small World editor, I’ll let you decide in which category I belong. While I’m sorry to see Tim Holland depart for his temporary posting in England, I am pleased to resume the editotial duty. (It occurs to me that the last two editors left to go to Europe. I guess I’d better find my passport.) My work is cut out for me as Tim has set a very high bar. His writing has always been entertaining and informative. Tim also brought Small World into the twenty first century; first by using the Dropbox and the cloud to distribute the newsletter, and second by setting up the current blog format. Tim has done a truly superior job as editor and we wish him the best.

In addition to the technology, there is another important change. In this go-around as editor, I will have a staff! Our club photographer, Dave Fuller will write up the Show-N-Tell and Progress Report segments, and Tim Holland will continue to contribute from across the pond. And then, of course, any contributions from you will be greatly appreciated. If you have anything from a brief tip or hobby news item to a full blown review or build article, just email it to me and we’ll fit it in. As I frequently said during my first editorship; this is your newsletter, I’m just here to keep things organized.

See you at the Christmas party!
Chuck
Posted by Unknown at 4:58 AM No comments:

Lots of in progress builds this month.  Its nice to see so many new projects taking shape. 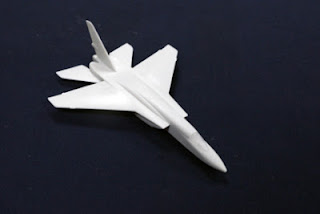 First up, we have Steve Workman's nice little 1:144 Arii RA-5C Vigilante.  Even at such a small scale, its a big airplane.  It's one of my favorites, and I can't wait to see it finished. 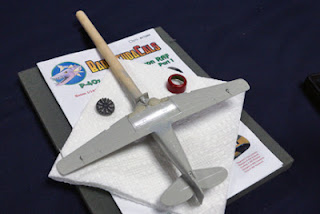 Next up is the nice Academy 1:72 T-6G Texan being built by Vince Mankowski.  At the time of the meeting the model had it's first coat of paint applied for an Israeli T-6.  Our spy cameras however have uncovered a sneek preview of the model with its full paint and markings applied. 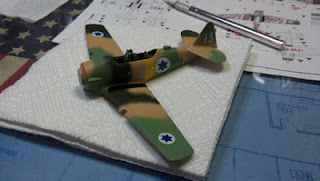 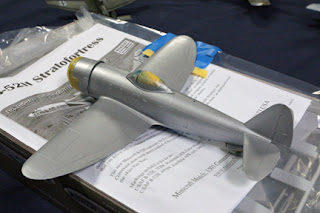 Making a return appearance is this Hobbyboss 1:48 P-47D Thunderbolt being built by Steve Lucianetti. Steve says that he plans on finishing it Out of the Box.
Ever the prolific modeler, Jim Rotramel brought along two in-progress projects.﻿ 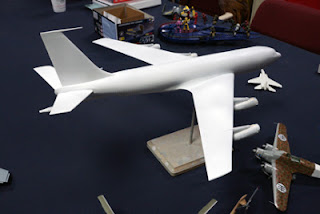 First up is the AMT 1:72 KC-135A Stratotanker.  Jim says that the plastic on this original boxing of the KC-135 builds more like a vac-form kit than your typical injection molded kit.  Among other things, Jim had to add a metal spar to the wings to keep them from drooping as well as fixing a problematic window to fuselage joint. 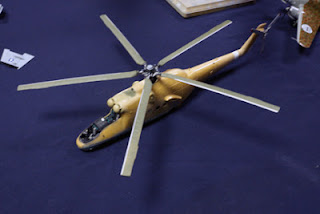 Along with the Stratotanker, Jim also brought along a Monogram 1:48 Mi-24 Hind.  According to Jim, the biggest issue with this kit is the fact that the tail is about 3/8" too short.  This would result in the tail rotor meshing with the main rotor.  Not something I think the original designers had in mind!  Jim tackled this problem by slicing off the tail just forward of the fin and splicing the two pieces back together with a filler made of strips of plasticard and gap filling CA. 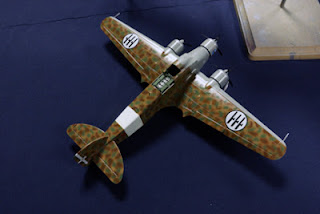 Another model making a repeat appearance is the absolutely beautiful SM.79 Sparviero built by Nate Swift. Nate is using the 1:72 Italeri kit to model an aircraft from 281st Sqn, 132nd Gp, based out of Rhodes circa 1941.  Nate also added the Eduard interior and exterior PE sets as well as Quickboost engine cowls.  He also separated all of the flight control surfaces for a more realistic stance.  Nate says the fit was generally good.  The paint job needs to be seen to be believed. 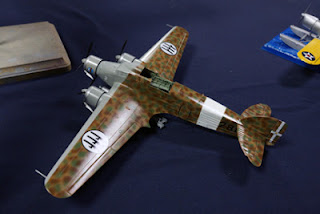 Ryan Turgeon also brought along a couple of in progress Hornet projects that we have been tracking the progress on. 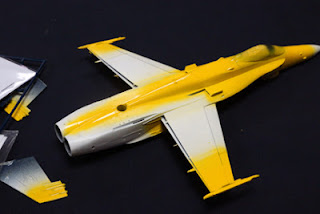 First up is the Hasegawa 1:48 F/A-18 Hornet.  Ryan is building this as part of a pair of F/A-18s in Blue Angels markings.  Ryan is modifying both kits to portray them in flight performing the famous "Fortis" manuever.  This involves modifying the landing gear to be in the extended position.  Both models utlize Rhino Models seamless intakes.  The Hornet to be placed in the inverted position also has Aires resin landing gear bays. 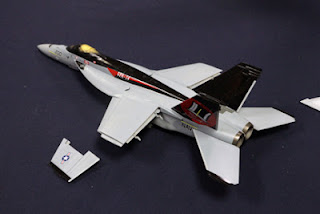 Ryan also brought along a Hasegawa 1:48 F/A-18E Super Hornet.  This model is being built for the Tophatters build for the Pax River museum.  Markings are from the Fightertown Decals sheet.
Also making an appearance at the meeting was a Hasegawa 1:48 F-14 Tomcat being built by Nick Kessel﻿, which is also for the club's Tophatters build.  Unfortunately, my camera doesn't like Super Hornets and was unable to take a clear picture afterwards, even of an F-14.  Next time I'll make sure to take pictures of all Super Hornets last to prevent future problems.
Posted by David Fuller at 9:42 PM No comments: