I hope that everyone had a wonderful Christmas and a Happy New Year.  For those that couldn't make it to the Christmas party, you can see from the picture that it was quite a good time as it usually is.  There was plenty of great food, and quite a few really nice models in the gift exchange. 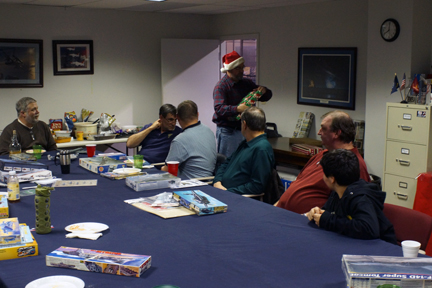 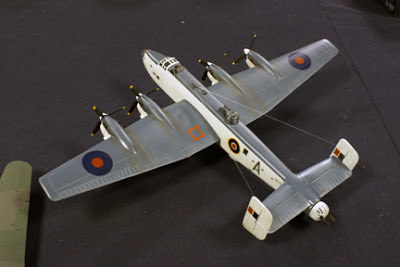 There was no theme for the club meeting, but we did have a few models for the show and tell.  Tim Holland brought along two models, one in progress and one complete.  First up is his Matchbox 1:72 Halifax Gr IIa.  This model was built out of the box for the Museum's eventual Battle of the Atlantic display, with a custom mix of Tamiya paint for the Extra Dark Sea Gray.  According to Tim, this was his second attempt at the kit, as the first attempt ended up being "Collinized".  The decals were applied using Scott Samo's "spit & polish" technique, and was lightly weathered.  Hopefully Tim used his own spit, and not Scott Samo's... 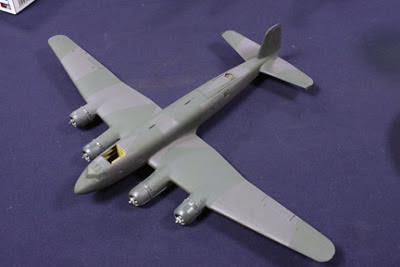 Next up from Tim is another build for the Battle of the Atlantic display.  This is the Revell of Germany 1:72 Fw 200 Condor.  This is actually a team project that Tim is finishing that was originally started by Dan Yakel.  Hopefully there will be enough room in the display case for all of the great models the club is building for the museum. 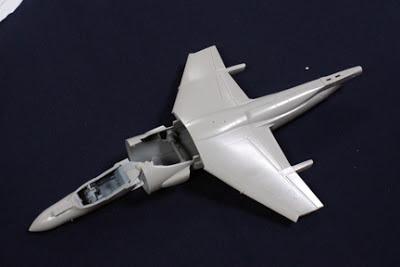 Another team build project is this Hasegawa 1:48 AV-8B Harrier that is being worked on by Dave Fuller.  Dave is building this model for a VMA-211 Tribute Group Build on Aircraft Resource Center.  There are eight different participants in the group build, and each person is taking care of a different aspect of the build.  The first stop was in Ohio where the cockpit was painted and assembled along with the landing gear.  Dave is in charge of the general construction, and then it will be on to the rest of the members of the group build.  The completed model will eventually be donated to VMA-211 as a memorial to those that were lost in the attack on their airbase in Afghanistan in mid-2012. 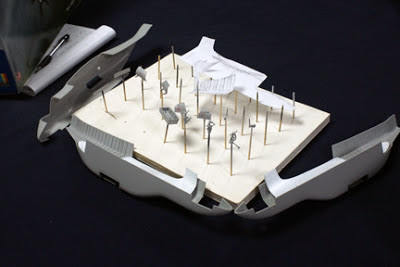 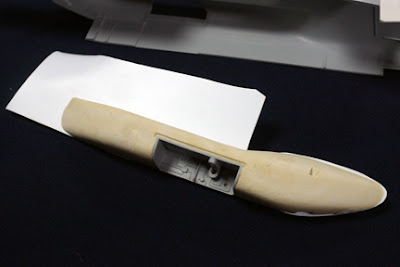 And lastely we have an in progress build from Vince Mankowski.  No Vince is not working on a 1:48 pungee stick diorama, but it is actually the Italeri 1:48 MV-22B Osprey.  Vince has been hard at work scratchbuilding and scratch detailing the entire interior of the model.  Vince plans to make molds of his interior parts and offer them as a drop in conversion for other modelers wishing to add a little extra to their models.  Folded wings and propellers in the stowed configuration will round out the model nicely.  Can't wait to see it finished!

That wraps up this month's rather short update.  I hope to see everyone at the January meeting!