January's theme was "Unmanned", but that certainly didn't mean that it would be "Unattended".  With six completed models and four in progress builds, this turned out to be quite a popular theme.

So popular in fact that Chuck Connor wowed the club with his superb rendition of the Academy 1:35 RQ-7B UAV as operated by the US Army.  Chuck noted that other than a hypodermic tube for the pitot the rest of the kit was built OOB, although he did point out that should he build it again, he would probably replace the tail booms and landing gear with some other material as they were very flimsy.  The model was painted entirely with Vallejo acrylics and then done up with the kit supplied Cartograph decals.  Nice to see that Chuck still remembers which end of the paint brush goes into the jar!  Can't wait to see more Chuck! 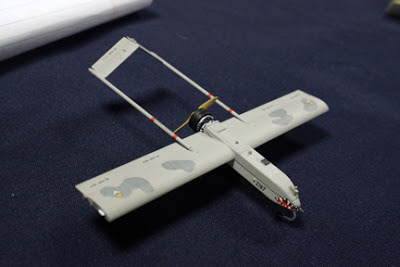 Next up is the Accurate Miniatures RQ-1 Predator built by Andy White.  Andy built this popular little model OOB with markings for a unit out of Creech AFB. 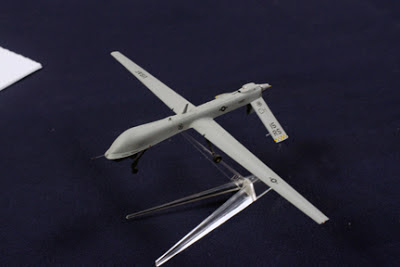 Dave Fuller also brought along his rendition of the RQ-1 Predator built OOB with Wolfpak Decals markings for an example flown by the 178th RS, 119th WG "Happy Hooligans" from the North Dakota ANG. 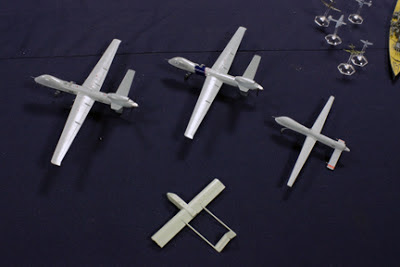 Accompanying the RQ-1 were two MQ-9 Reapers built from the 1:72 Skunkmodels kit.  Both were also built OOB with the markings being a combination of the kit supplied decals for the example flown by the US Customs and Border Patrol as well as Caracal Models decals for the Royal Air Force example belonging to RAF 38 Sqn.

Rounding out the theme builds for the month was Tim "I've Got a Spitfire for That" Holland with his Frog 1:72ish Spitfire FMK XIVe and V-1 buzz bomb display.  Tim says that while the V-1 is quite a nice kit, the Spitfire is "crap".  Specifically, it is too small (about 1:75) and has numerous inaccuracies. 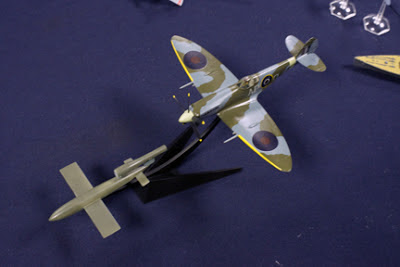 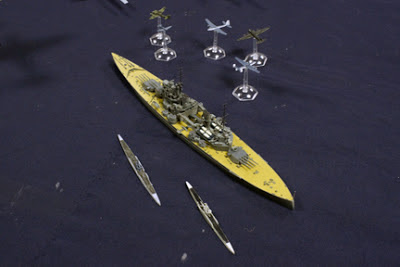 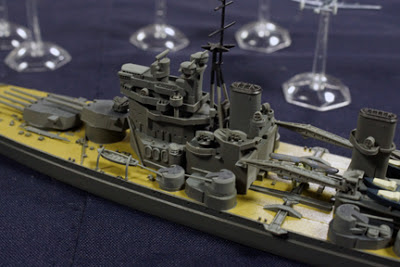 Along with the theme build, Tim also brought along a few of the models he is working on for the Battle of the Atlantic display the club is doing for the museum, all in 1:700 scale.  Dominating the scene is the Tamiya HMS Prince of Wales which Tim reports as having too many pieces that required way too much work.  Good thing it wasn't a Dragon kit!  Also in the photo are two U-boat models built by Tamiya (Type VII) and Hobbyboss (Type IX) as well as numerous 1:700 aircraft converted from wargaming minatures.  They were unsurprisingly, easier to build than the Prince of Wales. 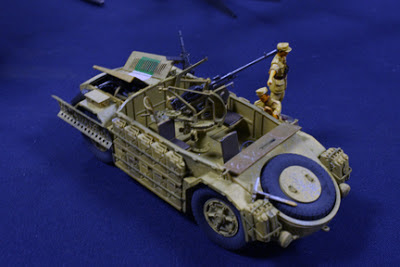 Moving on to dry land, we have a very nice Italeri 1:35 Italian armoured car built by "Doc" Haugh.  If I am reading my decoder ring correctly, according to Doc's information sheet, it is a "Sahariana" which was built OOB, and was a "nice kit" with "no vices" (the kit, not the real thing). 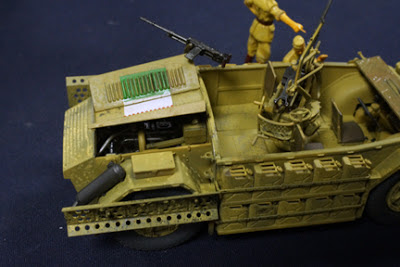 Dan Yakel also brought along a very nice looking WWII armor model in his Tamiya 1:35 T-34/85.  Dan added an aluminum barrel and bed spring armor.  The kit rubber band tracks were replaced by ones taken from a Dragon kit to give them the proper "sagged" look. 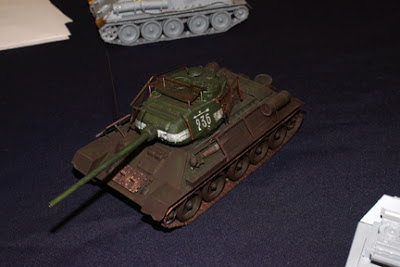 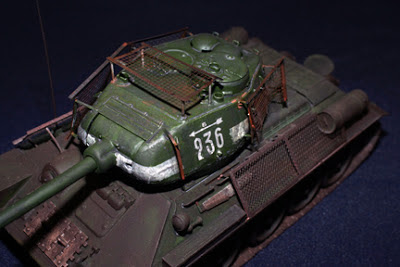 Nick Kessel brings us back into the wild blue with his 1:48 Hasegawa F-14A Tomcat.  Nick built this model for the museum's "Tophatter's" history display, and sourced the 80th Anniversary markings from Fightertown.  A Wolfpack "Bombcat" update set and Hasegawa AIM-9Ms and GBU-24 round out the build.  Nick says he certainly plans on building more of the Hasegawa F-14's, and I can't wait to see them.  You can never have enough F-14's!

If you've been following the newsletter lately, I'm sure you have been following along as Nate Swift's SM.79 Sparviero has progressed along.  Nate's model started out as the 1:72 Italeri kit to which he added Eduard PE interior and exterior details as well as new resin cowls by Quickboost.  Nate applied a beautiful airbrushed finish to complete this stunning model. 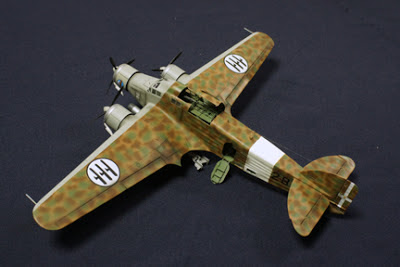 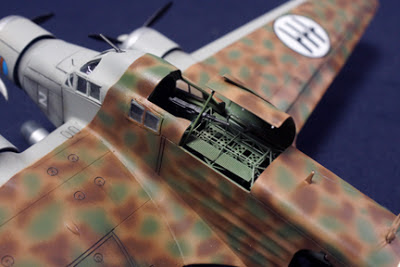 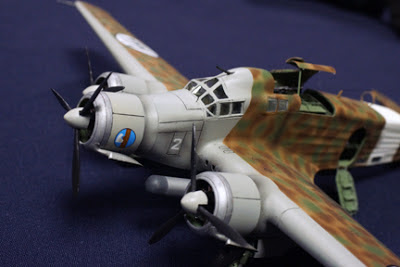 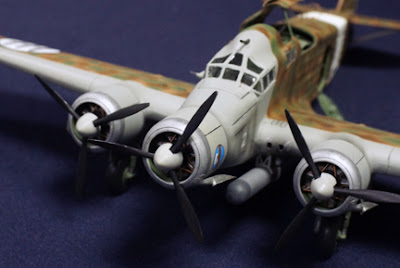 Another finished build that we have been following along with is the 1:48 Mi-24 Hind F built by Jim Rotramel.  Jim started with the Monogram kit and added various Cobra Company resin sets to detail the cockpit, weapons, ECM, as well as the Hind "F" gun mod.  Jim also performed extensive modifications to the kit to lengthen the tail boom to the correct dimensions. 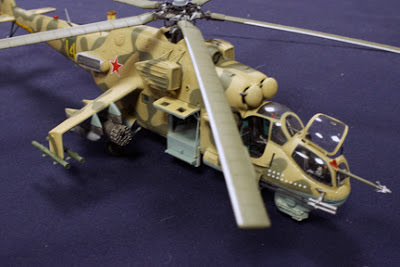 Rounding out the completed show and tell builds were these three very nice models done by Joe Hegedus.  Beginning in 1:72 scale we have the Trumpeter Westland Wyvern S.4 which was built completely OOB.  The model is as nice as the real thing is ugly. 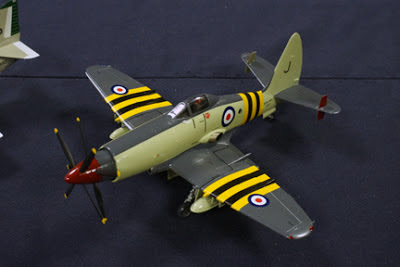 Also in 1:72 scale is this nice example of "Heinemann's Hotrod".  Joe started with Fujimi's excellent A-4C Skyhawk kit and added Hasegawa TERs and Zuni pods along with decals for the VA-76 MiG-Killer from the 2011 IPMS Nationals decal sheet. 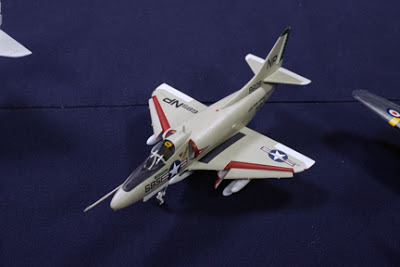 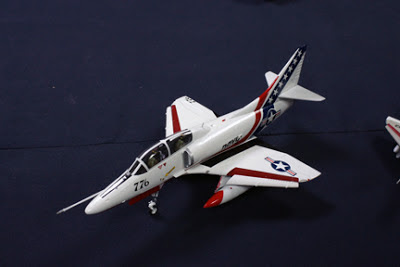 That's all for now folks.  Next month's theme is "The Need for Speed" and we should have some great models to showcase.
Posted by David Fuller at 8:00 PM