For the second month in a row, there were quite a few in progress builds at the meeting.  There were three builds for February's "Need for Speed" theme, as well as six additional non-theme builds.

First up in the theme builds is this very nice Revell 1:32 Bell X-1 being built by one of our newest members, Mike Colvin.  Thus far, Mike has set upon improving the old kit of the first supersonic aircraft with seatbelts made from tape as well as a nicely wired instrument panel.  Mike says that he prefers to add details the old fashioned way, from bits of plastic, wire, and pretty much anything else that will fit the bill.  Keep up the good work Mike! 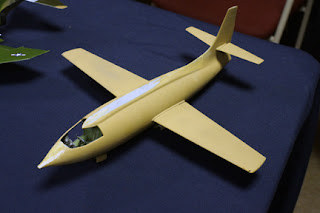 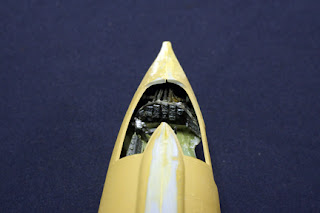 Next up is a "twofer" theme build from Chuck Connor.  Chuck's first entry is the Hasegawa 1:72 F-104 Starfighter which will eventually be done in the "Red Baron" scheme.  It was in this airframe that Darryl Greenamyer set the 3km low level speed record of 988.26 MPH on 24 October 1977, a record that still stands.  Pretty amazing, considering that the airframe was an amalgamation of various crashed airframes, including parts from the first production F-104A and the nose from one of the NF-104 rocket boosted airframes.  Chuck's build however, is strictly OOB, with only the ejection seat requiring some modification to fit underneath the canopy. 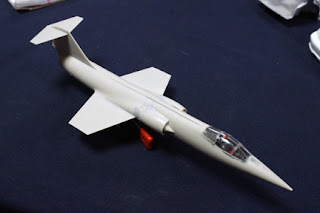 Chuck's second build is the Tamiya 1:24 Peugeot 206 WRC (World Rally Championship) race car.  These are great little kits that really build up nicely.  They also provide the modeler the opportunity to either build a nice clean and shiny car as seen "prerace" or heavily weathered and damaged as typically is seen at the end of the race.  We can't wait to see which way you decide to go Chuck! 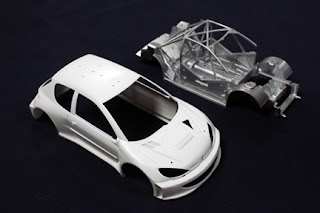 Moving on to the non-theme builds, we have this recently started CH-147F Canadian Chinook by Steve Workman.  Steve started with the 1:72 Italeri MH-47E kit earlier in the week.  Steve plans to model this one after the 2nd CH-147F built for Canada using CH-147F currently at Pax River as well as Internet photos for references.  Details in the plans will include Eduard photoetched details to offset some of the kit's deficiencies. 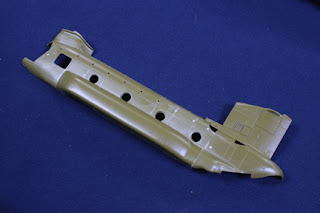 Tim Kelly returned to the club after an extended leave with a Trumpeter 1:700 HMS Hood, circa 1941.  Tim is currently building this model OOB, and will be donating the model to the future Battle of the Atlantic display for the Pax River Museum.  Good to have you back Tim! 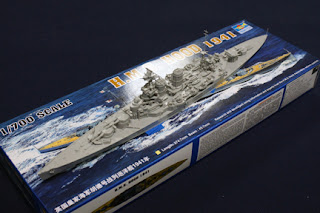 Next up we have an Italeri 1:48 Mirage 2000C being built by Nick Kessel.  Nick has been busy fitting a Black Box resin cockpit, and will soon be adding TwoBobs 2001 Tiger Meet decals and an Aires resin afterburner nozzle. 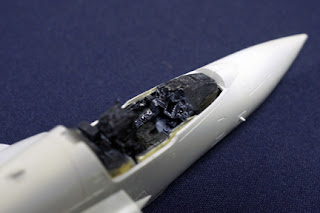 Joe Hegedus was also in attendance with a "FrankenCorsair".  Joe is currently using a variety of different kits to accurately portray yet another 1:72 F4U Corsair. 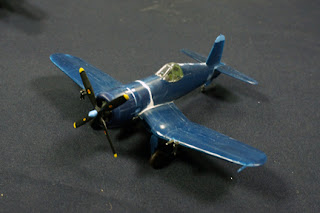 Moving away from aircraft, we have a 1:35 Ki 89 Otsu Japanese medium tank that is being built by "Doc" Haugh.  According to Doc, this kit is from the FineMolds "Girls and Panzer" theme, which is based upon a Japanese Anime cartoon.  Apparantly, it was actually cheaper to buy this version and source correct details elsewhere, but I think Doc was just looking for some "nose art" for some of his other builds. 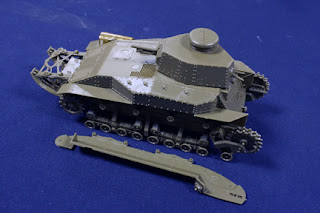 Last but certainly not least we have a 1:6 King Leonidas (of The 300 fame) sculpted by Vince Mankowski.   Vince started with a wire coat hangar armature, which was then wrapped in aluminum foil to fill out the shape.  The figure was then covered in Sculpey clay for a rough shape and then baked.  The final layer is Milliput fine epoxy putty rolled into thin sheets and applied to the Sculpey frame. 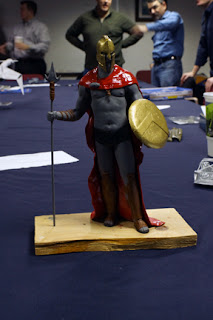 That is all for in-progress builds.  There is lots of promising work here, keep it up guys!