February's theme was "Need for Speed", which was very well represented.  There were a total of six theme and five non-theme models.  New for this month was a club vote for Best Theme Build as voted on by the membership present.

The winner of February's Best Theme Build was Jim Rotramel with his AMT 1:72  XB-70A-1.  Jim built his Valkyrie almost completely OOB with the exception of sourcing a couple of pilots from an SR-71 kit.  Even at 1:72 scale, the Valkyrie took up quite the amount of real estate and looked very impressive.  For his efforts, Jim took home an assortment of modeling clamps, donated by Chuck Connor. 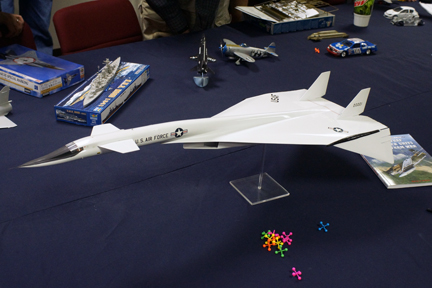 Other theme builds included Nick Kessel's equally impressive 1:48 RA-5C Vigilante.  Nick start with the Trumpeter kit and proceeded to add on a slew of aftermarket upgrades including an Eduard Zoom photoetched cockpit set, Aires afterburner nozzles, SAC metal nose strut and Nautilus center brace.  Nick then topped it all off with markings from RVAH-13 circa 1973 from the Aeromaster sheet. 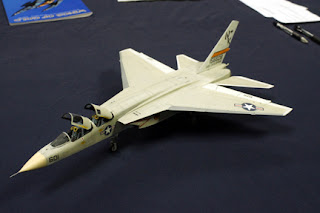 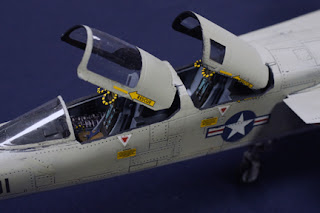 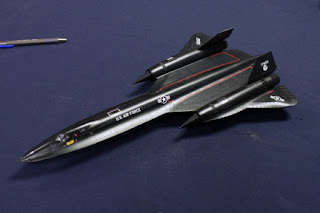 Rounding out the airborne theme contingent, we have another OOB Revell build, the North American X-15 in 1:72 scale built by Steve Lucianetti. 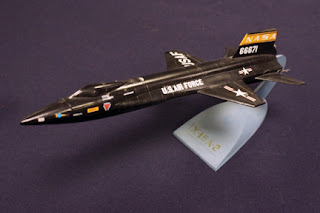 Still keeping in theme for "Need for Speed", we have a Monogram 1:24 Ford Thunderbird NASCAR built by Steve Workman. Steve built this kit OOB, but added decals to represent the Sunny King Ford Thunderbird driven by Ken Schrader in 1985. 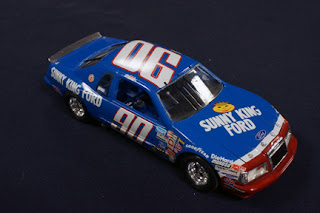 The final theme entry for February was this Tamiya 1:24 Ford Escort RS Cosworth rally car built by David Fuller.  The model was built completely OOB, including kit decals.  David used Tamiya spray can colors which were decanted and airbrushed.  The markings represent an Escort that was sponsored by the Michelin tire company and entered in the 1994 British Rally Championships where it won 4 out of 5 races, winning the title. 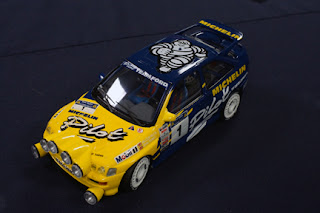 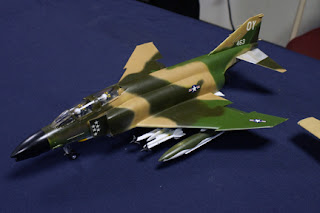 Joe Hegedus brought along two newly completed builds, including this very nice Eduard 1:72 F6F-3E Hellcat.  Joe added a Hasegawa radar pod and propeller as well as markings to represent a Hellcat assigned to NATC Flight Test at Pax River in 1944.  Could that be exhaust staining I see on there?!? 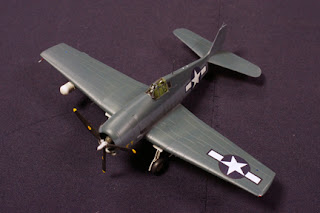 Accompanying the Hellcat was this 1:72 F4U-1A Corsair that Joe built from the Tamiya kit.  The kit was built OOB with the addition of Superscale markings for VMF-122 out of Peliliu circa 1944.  I'm sure that Joe has built enough of these kits that he could probably build one in his sleep! 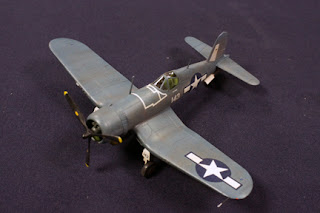 Continuing in the "Gentleman's" scale, we have this very colorful 1:72 F4F-3 Wildcat built by Jonathan Wright.  Jonathan started with the Academy kit and added Starfighter Decals. 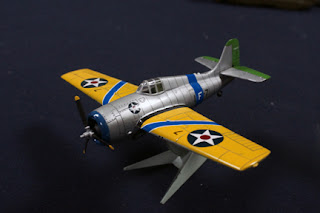 Lastly we have a very nice 1:48 P-47D Thunderbolt that we have been watching Steve Lucianetti complete over the past few months.  Steve started with the Hobbyboss kit and added Eagle Strike decals. 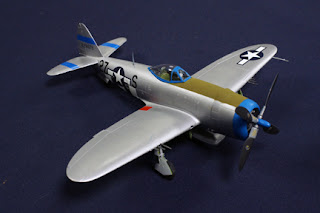 That's it for this month's progress report.  Don't forget, the March them is "The Final Frontier" and I'm sure that we'll have some great builds coming to you from a galaxy far, far away.  Stay tuned!
Posted by David Fuller at 8:31 PM