Living out of a suitcase isn't the best way to enjoy our hobby. No tools, no kits, no paint (fumes) and none of the other things that make this so enjoyable a hobby.

Because my shipment has yet to arrive, and I'm not sure the ship has even docked, I'm forced to violate the one rule I had coming here: no new tools, or other supplies, needed to model. Oh sure, I'm buying kits, decals, resin and brass, but until recently, no tools.

I am going through withdrawals. The opposite of Advance Modelers Syndrome, I must build a kit regardless of the genre, scale, or medium!

What does a modeler need who has everything yet nothing?

Start by walking through a build:
I found a decent hobby shop that is a reasonable distance. Only 45 minutes away up in Wigton, called Jackson's, he has everything I'll need and a good stock of kits to choose from as well.

Since I wanted to buy the Admiral FM-2/Wildcat VI kit from Hannants anyway, I added the AZModel Spitfire Ib kit to my order. Both are very accurate and "best in scale" for these two subjects, even if limited run kits and all that entails. Since I have my primary Spitfire reference with me (Spitfire The History) I decided to dive into the Spitfire kit.

I've attempted converting Tamiya's Mk Vb kit to a Mk Ib, but failed miserably. That was nearly two years ago and my skills and knowledge are a bit better today. (Ok, before you ask, the AZModel kit is really their Mk Ib/IIb/Vb/VI kit, so modifications are required to make the version desired.) Technically there were only a handful of Mk Ib, and the weight of the 20mm cannons with two outer wing .303's was too much, so all were quickly converted to Mk Vb standard with the more powerful Merlin 45 engines. There WERE 30 "cannon armed Mk I" aircraft used during the Battle of Britain, but these had no guns, only the two cannon. Because he guns were installed uniquely in the Mk I (and II) they had a tendency to jam after only firing a few rounds. Not a positive thing during the height of battle!

So this subject will require a few added mods, which given my desire to model and lack of usual tools, I'm going to be challenged. This is where I am so far, taking it slow to truly enjoy it: 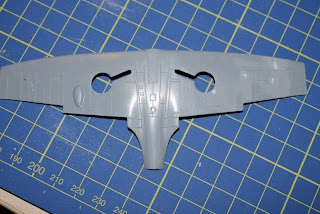 On the right (left underside) wing is what I've filled so far; both outer gun casing ejector chutes, and the ejector opening used on the Mk V/VI only (part of how Supermarine solved the jamming). I also removed the large bulge on the underside, as the Mk I's had a smaller bulge based on how the cannon was situated in the wing. There are also small bulges near the outer guns used for heating that were not installed until the Mk V, albeit retrofitted to the Mk I/II post Battle of Britain.

The topside requires no changes. What is nice for this build is that the wings were modified for the cannons and the outer gun bays not changed other than as as I've indicated above. A very easy mod.

Another difference, but not noticeable in this scale, is the Mk I/II and early Mk V's had fabric covered ailerons, replaced by metal covered in 1941.

Airfix's liquid glue is is very thin, and the brush that comes in the lid is large. It gets everywhere so I've had to clean a number of fingerprints and other mistakes. I miss my Tenax...

Since this photo was taken I've finished the wing, painted all the interiors and started on the fuselage. Slow going given its limited run nature, but very enjoyable. I've also been to RAF Cosford for the IPMS Shropshire show where I picked up some kits, resin and references. Airfix had a display of their new Lancaster BIII (special) Dambusters kit, each of the aircraft in the squadron built by members of the Shropshire chapter. The kit was just released the following week, and YES, I have one. I also picked up their new Typhoon kit and both are very nice. I'll write up a preview for next month on at least one of them, if not both.

Until next time...
Posted by Tim Holland at 9:43 AM No comments:

The theme of the March meeting was "The Final Frontier: Real Space or Science Fiction".  Theme builds totaled seven, while non-theme builds totaled five.  The theme this month was rather lopsided with one "Real Space" build, and six SciFi builds.  Not surprising, considering this follows the formula of most meetings, a little truth with a whole lot of fiction...

Taking top honors this month in the theme build voting was Mike Colvin with his Polar Lights 1/350 Space Ark from the movie "When Worlds Collide".  Mike built his completely box stock, complete with launch platform. 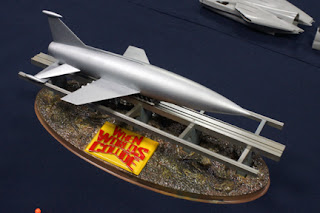 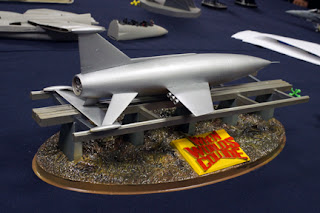 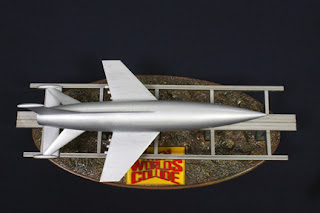 Jim Rotramel was on hand with the lone "Real Space" build with his 1/72 Revell X-15A-2.  Jim also finished his model OOB. 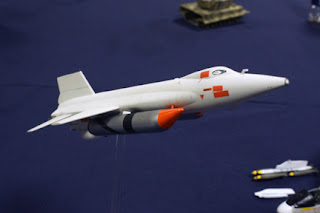 Representing the bulk of the theme builds this month was "Doc" Haugh with his collection of 1/72 Star Wars models by Fine Molds.  Doc brought along his Slave I, X-wing, TIE Fighter, and TIE Interceptor, all built OOB.  Quite an impressive display. 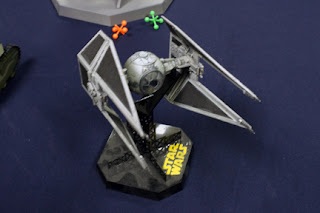 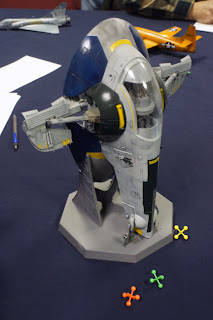 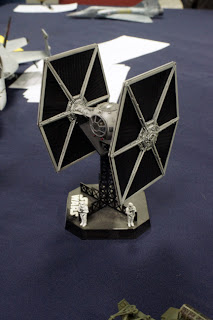 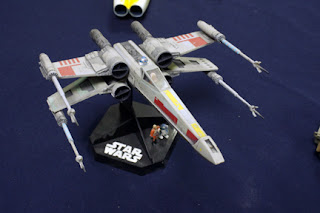 Rounding out the theme builds was David Fuller, also with a Fine Molds 1/72 TIE Fighter.  David added thin sheets of .005" clear styrene between the solar panel wings and frame work to represent a protective coating to the solar cells.  If you've never tried one of these Fine Molds Stars Wars kits before, you owe it to yourself pick one up.  They are a fun break between the more serious builds. 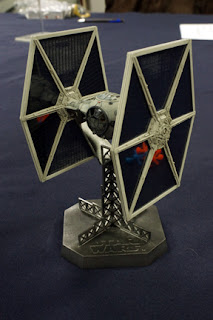 Along with his Space Ark, Mike Colvin also brought along his 1/32 Revell X-1.  We've been watching the progress in past months on Mike's X-1, and it's nice to see the finished product. 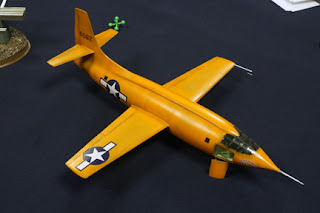 Another build that we've been watching with interest over the past few month's is Ryan Turgeon's F/A-18E Super Hornet.  Ryan has been working on the 1/48th Hasegawa kit to which he added an Afterburner Decals F/A-18E/F detail set and finished in Fightertown Decals VFA-14 Tophatters Anniversary markings.  Ryan will be donating the model to the Museum's Tophatters squadron history display. 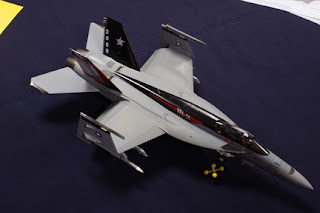 Switching up scales and era's we have this 1/72 Heinkel 51-B built by Jonathan Wright.  Jonathan built the ICM kit out of the box, but poor decals necessitated that the bulk of the marking be painted by hand. 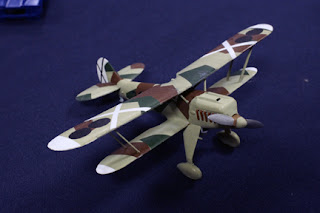 Rounding out the show and tell builds, we have these two obscure 1/35 armor models built by Doc Haugh.  These models are so obscure in fact, that we know absolutely nothing else about them. 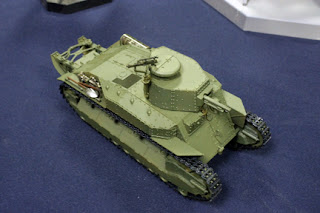 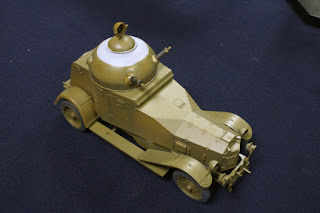 As many of you are aware, long time member Vince Mankowski will soon be packing up the wagons and heading west.  Before leaving however, Vince decided to pass along a useful tip to any of us that may have to move our models across the country at some point.  Vince brought along a couple of the boxes that he uses to transport his models and showed us how he takes foam padding that can be bought at most craft stores to create pockets that each model will fit in nice and snug.  Vince says that this technique saved his HE-219 UHU at last year's Richmond contest when a gust of wind sent the box and model tumbling across the parking lot.  Seems like time well spent to protect your works of art. 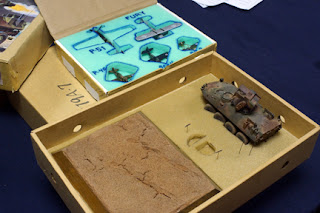 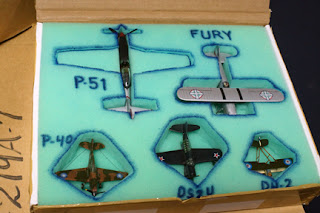 Posted by David Fuller at 9:16 PM No comments:

Chuck Connor starts off this month's "In Progress" update with his Dragon 1/48 Apollo 11 Lunar Module for the them build.  Chuck is building his LM strictly OOB, and comments while it is a nice kit, it has terrible instructions.  Who ever said you needed instructions anyway? 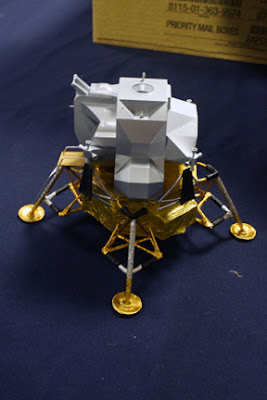 For the non-theme minded in progress builds, we have Ryan Turgeon's 1/48 Hasegawa F/A-18C.  Ryan is building this Hornet as part of a pair to represent the Blue Angels' #5 and #6 aircraft performing the "Fortis" maneuver.  He is using Steel Beach vinyl masks to paint the yellow markings, and will be representing the aircraft as seen at the 2011 Pax River Airshow where they performed the entire show using Biofuel. 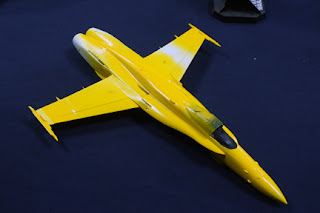 Also in 1/48th, we have this Italeri Mirage 2000 being built by Nick Kessel.  Nick is using a Black Box cockpit, Aires exhaust, and TwoBobs decals for the striking 2001 Tiger Meet markings as flown by the French AF. 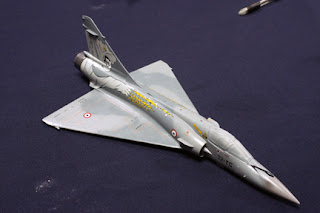 Newer member Christopher Williams brought along his 1/35 Tamiya Tiger I.  Christopher is building this Tiger as one that served on the Eastern Front, and is currently awaiting the rest of his supplies and components to arrive from a far off land called "West Virginia".  Sounds like another Tiger I stranded by an unreliable supply chain... 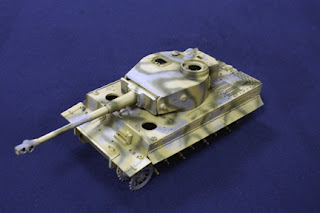 Gerry Whiteside brought along two in progress builds this month, the first of which is this Hasegawa F-14A.  Don't tell anyone, but Gerry is actually building this one in "The Forbidden Scale" of 1/48.  Gerry is primarily building this one OOB, but did add the Remove Before Flight tags to the ejection seats.  Final markings will represent a Desert Storm bird from VF-102. 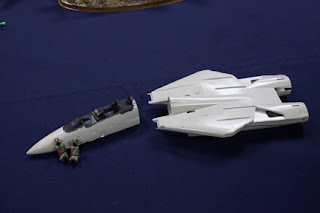 Determined to show that he still builds in "The One TRUE Scale", Gerry also brought along his Airfix 1/72 BAe Hawk.  Gerry is building the kit OOB for the club's "Build the Same Kit" theme later this year. 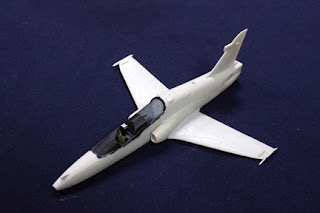 Taking a sabbatical from aircraft models, David Fuller brought along a trio of automotive builds.  The first of which is this Revell 1/24 1962 Corvette.  The color is Duplicolor Garnet Red out of a rattle can. 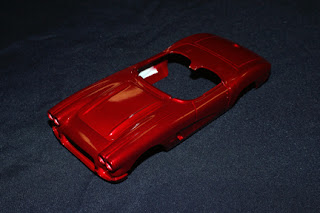 David also brought along this pair of 1/43 multimedia racing kits by Starter.  The Lola T70 is being built as the blue and yellow Penske Sunoco car raced by the late Mark Donohue, while the Ferrari 333SP is being built as a test chassis.  These are David's first attempts at multimedia resin and metal kits. 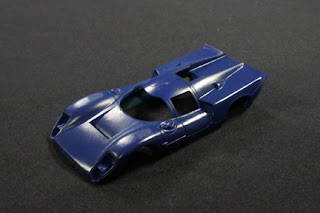 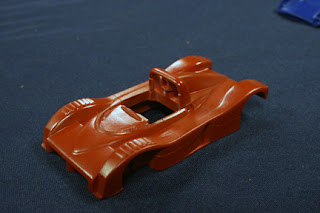 Finally, we also have this beautiful 1/48 Hasegawa A-7 Corsair II being built by Collin Tatusko. 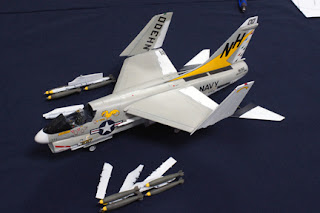 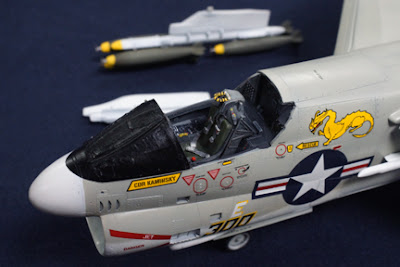 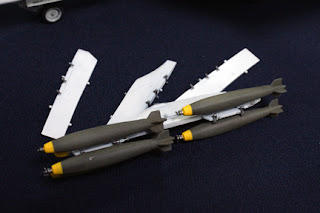 Posted by David Fuller at 8:44 PM No comments: