As most of you know, my wife and I are looking to move to Spokane, WA in the (very) near future.  To make this possible I have been looking for work very hard for the last several months, so hard in fact that I haven’t touched a model on my workbench since early February this year!  Since I have been running into road blocks (3,000 mile distance not withstanding) and growing frustrated in my search to the point a week ago that I simply said “To heck with it, I’m going to take a break and build a model!”


Rooting around in my stash, I wanted something I could build ‘out of the box’ relatively quickly that would have a unique or striking paint scheme to it.  My eyes fell to the 1/144 Revell F/A-18E Super Hornet kit (number 03997). 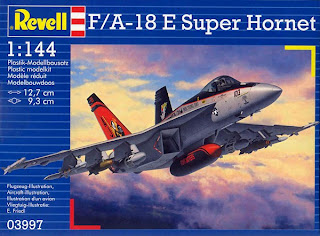 I just happened to have the DXM decals for a ‘digital camouflage’ Super Hornet on hand.  The decals represent a “Commander, Air Group” or CAG aircraft from the VFA-137 Kestrels painted this way in 2011 in both an ‘early’ and a ‘later’ scheme.  The decision was made to proceed with this model, in the “digi-hornet” scheme. 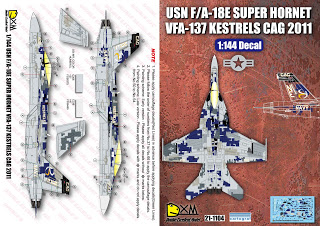 I started by cutting the parts to the model from all but one or two of their sprue attachment points and cleaning up the mold separation lines present on them.  Once they were cleaned up, I began the initial painting for interior colors for the cockpit, wheel wells, intakes, undercarriage and such.  Some parts I completely separated from the sprues and attached to toothpicks for preparation. 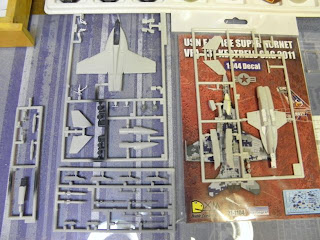 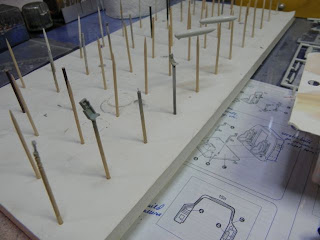 Once the initial painting was done, I started by applying the decals (yes, DECALS!) for the instrument panel and consoles in the cockpit.  This was followed by some more painting to complete the preparation for assembly. 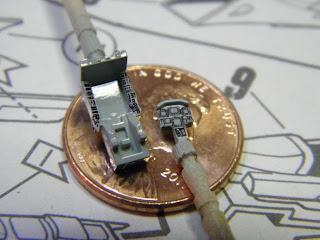 I followed the instructions for the most part, trapping the cockpit tub between the fuselage top and bottom halves, constructing the intakes with fan face along the fuselage, and attaching the nosecone to the fuselage assembly.  I clamped everything nice and snug to prevent any seam problems later.  I can say without reservation that this kit goes together very easily, and has great fit throughout!  There was very little in the way of seam clean up that was required.  The intakes have small attachment areas to glue them together, and are a little fiddly for folks who are not used to working in this small a scale, but other than this ‘hazard of scale’, the kit went together apace and with no troubles.


The all-moving elevators are connected on the sprue by a plastic dowel that passes through the fuselage so you can articulate them when construction is finished.  However, due to the scheme I was applying and the fact that the colors are comprised of decals I chose to clip the dowel and simply glue the elevators in after painting and decaling the model.  This was my only deviation from the instructions. 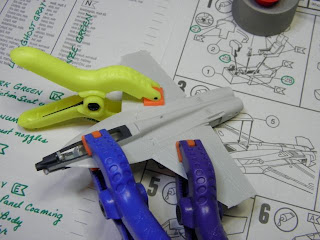 Clamping the fuselage together while the glue dries

Once all of the major assembly was finished, I prepared the model for painting.  I masked off the engine intakes and wheel wells to preserve the flat white prepainting.  I also masked off the canopy and while the windscreen was permanently glued in place, the canopy was lightly tacked in place using Ailene’s Tacky Glue so I could separate it later and install it in the open position. 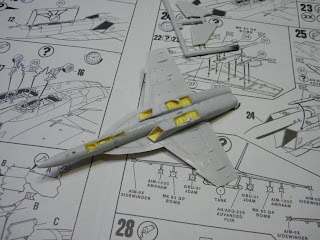 Ventral masking for the paint job 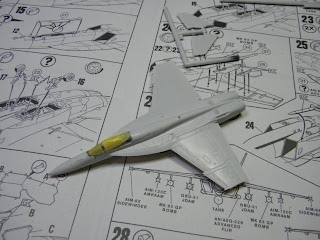 Dorsal masking for the paint job 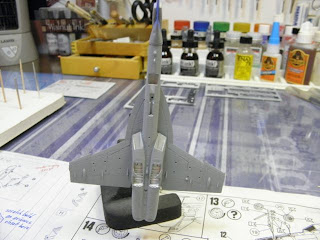 Unmasked and ready for decals

The DXM set for this scale is unique in that it includes all the digital camouflage as decals to apply over the single base color.  Now, that was unique, however it took some 30 decals just to apply the paint scheme to the model… in 1/144 scale!  The only hard part was in the beginning, with the first decal applied (right wing) as the alignment for the entire paint job relied on getting the first decal right.  The application sequence fell out as:  right wing, spine (6 decals), left wing, right LERX (2 decals), left LERX (2 more), aft fuselage (6 decals), forward fuselage (4 decals), nose (4 decals), vertical tail(s) (6 decals), and elevators (1 decal each).  A total of 34 decals just for the paint scheme! 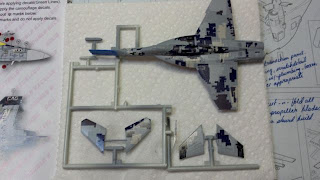 Once the color scheme was finished, then the aircraft and squadron markings had to be applied and believe it or not, it took even more decals to accomplish this.  The regular markings included items such as the “Navy” titles, squadron name on the spine, side numbers on the nose and flaps, bureau numbers under the elevators, and national insignias.  The DXM decal sheet also included some of the warning, safety, maintenance stencils and slime lights you would normally only find on models in larger scales!  All in all, I spent 3 nights applying decals to this little beast, but when they were finished I think it looked absolutely fantastic! 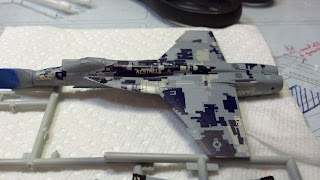 Squadron/aircraft specific decals going on over the camouflage decals

I used the Microscale decal setting solutions by putting the Set solution on the decals while the glue softened after a dip in room temperature water.  I applied the Sol solution to the spot on the model where the decal was to be placed.  Using this approach everything snuggled down just beautifully into all of the surface detail (note the photographs above carefully!).  The DXM decals responded very well to the Microscale products and did not melt, skew, or otherwise get damaged during the process and I am very happy with the results achieved.


Once the all of the decals were applied and left alone to cure over night, I started the process of attaching all of the fiddly-bits to this model.  Believe me when I say, that in 1/144 scale the fiddly-bits are that much more fiddly when you have large hands and fingers. 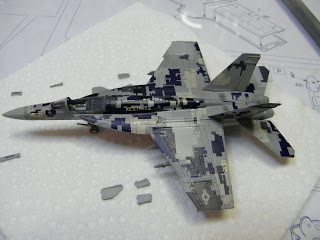 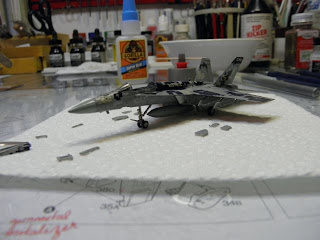 Oh, yeah, and the centerline tank is installed! 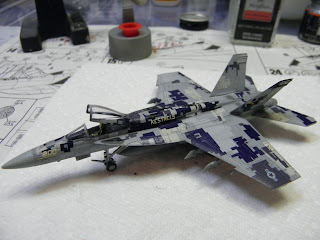 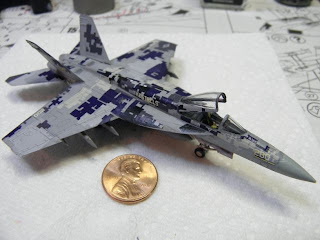 A penny for your thoughts… 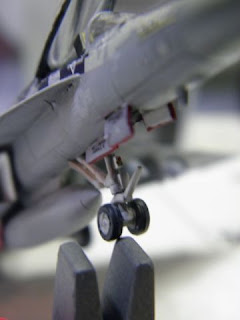 Carrier lights painted with the end of a sharpened toothpick 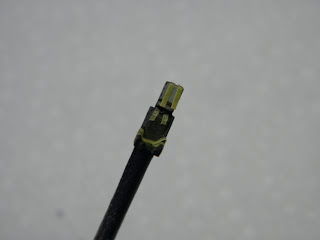 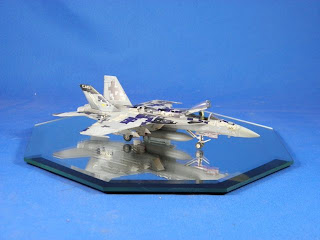 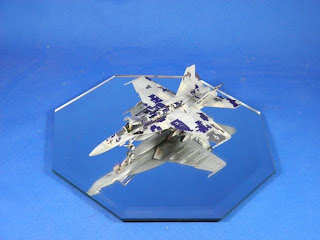 I thoroughly enjoyed building this model.  I applied a light wash to the entire airframe to pick out surface details.  Once I cleaned up the excess with a alcohol soaked cotton bud (or two, or three) the whole thing looked really nice.  I am contemplating adding the ordnance under the wings.  I painted up the AIM-120C AAMRAM and AIM-9X Sidewinder missiles along with a pair of GBU-31 JDAM bombs.  I think I just may add them after I get done absorbing the pleasure of finishing the first model I’ve completed since well before Christmas 2012!  I hope to not wait this long to finish another model ever again!
Posted by Unknown at 6:20 AM