The theme for April was "Friend and Foe".  A total of 28 completed builds packed the tables, 20 of which were theme related!

First up for theme builds we have a pair of armor builds by Jonathan Wright.  The 1:35 T-34 and Stug III Ausf G were voted the winner of the theme build, and Jonathan was awarded the much sought after "Golden Clamp" award by club president Chuck Connor.  For the T-34, Jonathan started with the Tamiya kit, representing a unit from 1934 which was built OOB.  Jonathan actually started the kit in the late 80's and dusted it off and finished it just for the theme build.  The T-34 was heavily weathered using Windex and Acrylic paints. 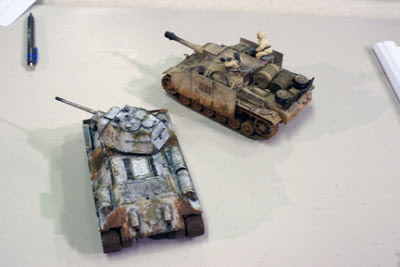 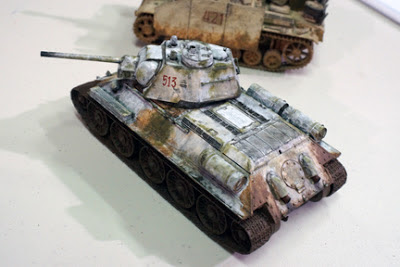 Complimenting the T-34 is Jonathan's Stug III, which was also built from a Tamiya kit.  Jonathan built the kit OOB, with a crew from a German Flak gun kit, and added stowage.  Like the T-34, the Stug was also heavily weathered. 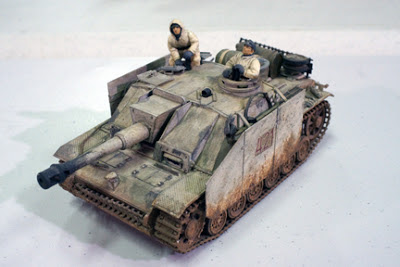 Moving on, we have the first of a pair of Corsair/Zero builds.  This pairing was built by Mike Colvin using the Arii 1:48 kits for both examples.  Mike commented that both were nice kits built OOB with added seat belts.  The canopy on the Zero was actually done with thin drafting tape instead of paint. 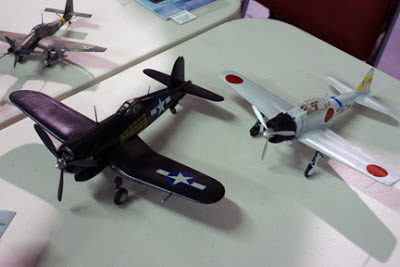 The second Corsair/Zero pairing was built by Gerry Whiteside, this time in 1:72.  Both kits were built OOB from the Hasegawa releases, although Gerry did substitute MicroScale Decals for the Corsair. 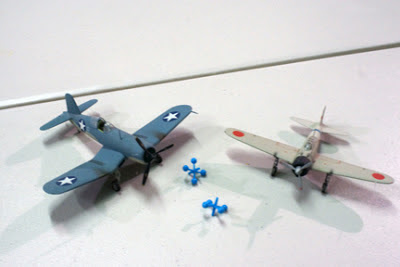 Highlighting an in-service rivalry, Joe Hegedus brought along a Tamiya 1:48 F2A-2 Buffalo and a Hobby Boss 1:48 F4F-3 Wildcat.  Both kits were built OOB, with Yellow Wings Decals added to the Buffalo. 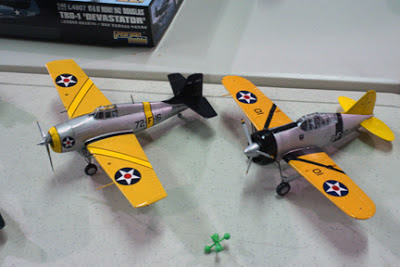 Nate Swift also brought along an in-service rivalry pairing from the other side in WWII.  The first is the Henchel Hs.129B-2 of 8.(Pz)/SG1 which was built OOB from the 1:48 Hasegawa kit.  The second is a Junkers Ju-87G-1 of Pz.J.Sta/St.G 2.  Nate finished the OOB 1:72 Academy kit in the markings of Hans-Ulrich Rudel. 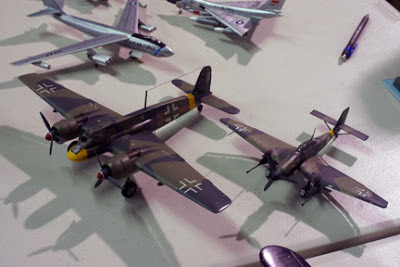 Moving ahead slightly to the Cold War Years, we have a group of four 1:144 builds by Ken Kelly.  In the first corner is a pair of Academy bombers, the B-58 Hustler and B-47E Stratojet.  Ken originally tried painting the B-47 with rattle can aluminum from Wal-Mart, but unfortunately it didn't react well.  Ken then stripped the entire model back down to bare plastic and then repainted it by hand with Polly Scale paints.  Opposing the pair of bombers are the Minicraft MiG-21PF and Arii MiG-25 also built OOB and hand painted with Polly Scale. 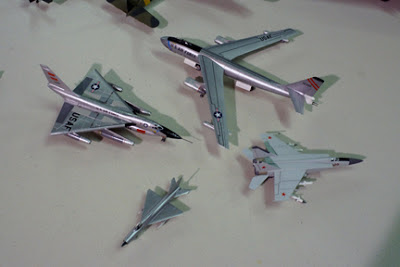 Staying with the Cold War era, but stepping up slightly in size we have a pair of 1:32 builds by Jim Rotramel.  The first is the excellent Tamiya F-4D with added Cutting Edge GBU-8s and Parts-R-Us nozzles.  The second model is the not-so-excellent Trumpeter boxing of the MiG-17.  Jim went about correcting the kit's flaws by adding a Cutting Edge cockpit and seat, a never released Cutting Edge clear resin canopy, scratch built the speed brake interiors and ventral fin as well as heavily modifying the tail section. 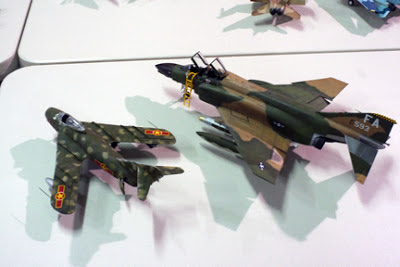 Ryan Turgeon brought along a more modern in-service rivalry pairing in 1:48th.  His F/A-18A and F-14A both started life as Hasegawa kits.  The F/A-18A was actually converted from a "C" kit, to which Ryan also added a Wolfpack Design wing fold kit, Tamiya AIM-9 and ACMI pod, and scratch built intake and exhaust covers.  The Hornet was finished in the NSAWC scheme using Fightertown Decals.  The F-14A also benefited from an AIM-9 and ACMI pod from Tamiya as well as a Hobby Decal pitot tube and scratch built launcher.  The very challenging "Splinter" scheme was masked by hand and topped again with Fightertown Decals. 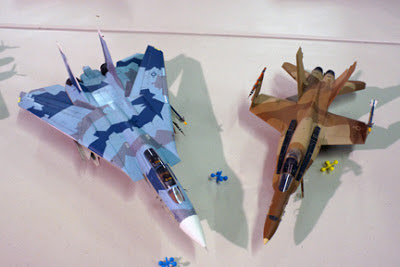 Rounding out the theme builds is this pair of modern European rivals in 1:48 by Nick Kessel.  The Slovakian MiG-29AS started life as an Academy kit, to which Nick added a Quickboost resin nose and instrument probes, Aires exhausts, Wolfpack cockpit, and Eduard intake covers.  The unique digi-camo scheme was applied using numerous decal sheets by Kopro.  Nick compliments this with the Italeri boxing of the old Esci Mirage 2000C kit.  Nick added an Aires exhaust, Black Box cockpit and TwoBobs decals. 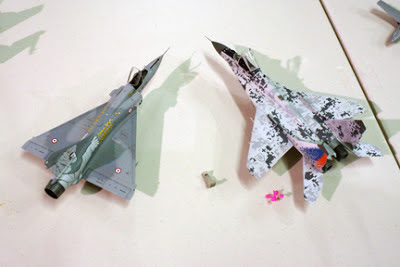 Starting off the few remaining non-theme builds is Austin Whiteside with his trio of Star Wars LEGO kits.  Austin brought along his Z-95 Headhunter which was the precursor to the famous X-Wing fighter.  Accompanying the Z-95 is an AT-RT walker and Umbaran Mobile Heavy Cannon.  It was apparant that the Cannon also has a taste for injection molded kits... 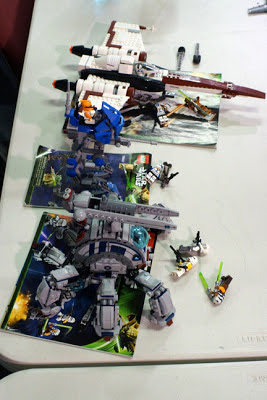 Steve Workman was present with a very nicely finished 52ft Mill Gondola in HO scale (1:87).  Steve started with a Proto 2000 kit and replaced the floor with an American Model Builders laser cut wood deck and Kadee #58 couplers.  Final markings were done in the Chesapeake and Ohio scheme to which Steve added weathering using pastel chalks and Oily Black paint. 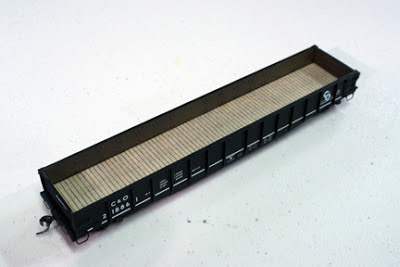 Previously seen in the "In Progress" updates is the beautiful P-51D Mustang built by Andrew White.  Andy started with the Tamiya 1:32 kit and modified it to represent a Pacific Theatre very long range mission escort.  Modifications included new antennas on the turtle deck fashioned from wooden toothpicks, a new navigation system, and Barracuda resin wheels. 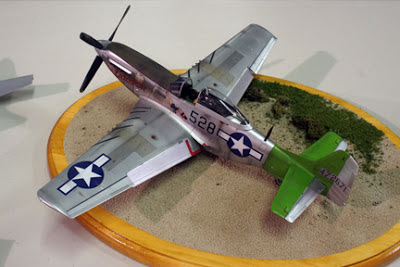 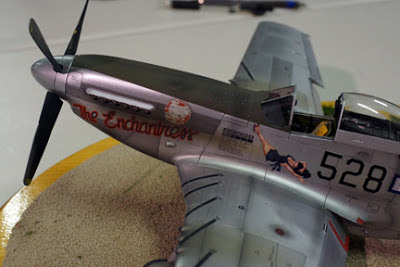 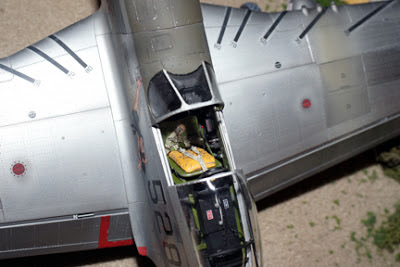 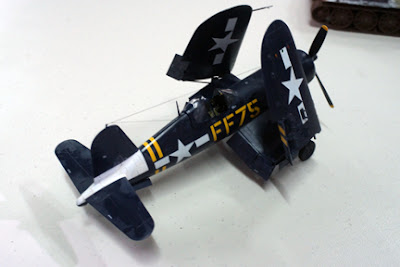 Last but not least is "Mr. Corsair" himself, Joe Hegedus with an Anigrand 1:72 XA2D-1 Skyshark.  Joe may have only built this one OOB, but with a multimedia kit that is no easy task. 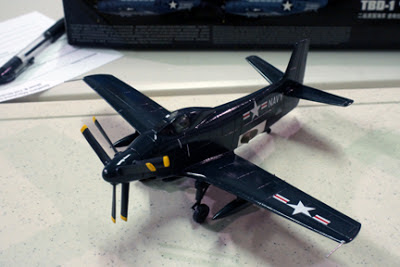 Not to be outdone, Joe also brought along a build that has been seen in previous "In Progress" updates, his 1:72 F4U-4 "Franken"Corsair.  Joe really raided the parts box for this one: Hasegawa fuselage and main wings, Italeri forward fuselage and belly section, High Planes guns and rocket pylons, Tamiya main pylons and drop tank, Engines and Things engine, Aeroclub propeller, Hobbyboss canopy and a combination of Italeri and Hobbyboss decals.  Wow! And who says you should ever throw out those spare parts! 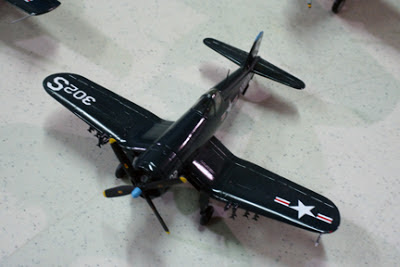 That's it for this month.  Hopefully there won't be as many models at next month's meeting, because my hands are getting tired from typing this update!
Posted by David Fuller at 9:07 PM