BTSK
Notes, Cautions, Warnings
For our October BTSK theme, the Airfix 1/72 scale BAE Hawk is the designated subject and I know that some of you have begun work on yours. It seems that Jim Rotramel is not one to procrastinate, as he has completed his! In way of helping his fellow modelers Jim offers the following build review of the Airfix Hawk kit.
Take it away Jim!
Build Review
1/72 scale Airfix Hawk (Kit # A02005)
By Jim Rotramel
I’m done with this little kit now, and have a few words of experience to share.
Fit is generally not too bad with one massive exception. The wing-fuselage join results in a significant ‘step’ on the bottom of the aircraft between the two. While you could do some cutting on the fuselage to make the wing fit flush (i.e., higher), that will result in a gap on top where the wing fairs into the fuselage. Pick your poison, but the bottom line is that the fit as it comes out of the box leaves much to be desired.
The instructions are okay, with a couple of problems. In step 10, they show that the wing fences need to be glued to the wing, but fail to provide any positioning information whatsoever. (They are roughly aligned with the break between the aileron and flap, maybe a couple of inches outboard.) Step 12 shows the flat clear windscreen between the front and rear seats (part 4H) being glued into the canopy (part 6H) without the benefit of knowing exactly where it goes (ARE you kidding me?). DON’T do it! You’ll note a small step on the front of the back seat glare shield (part 13A) in step 7. When you get to Step 12, attach part 4H there, NOT to the canopy.
I could point out some other things I have issue with, but this is an introductory-level kit, so for a young fan of the Red Arrows, it’s fine and generally accurate.
For masking, I bought the Eduard mask EDUCX248. WARNING! The break in the mask for the white separation band on the canopy (part 4H above) is too far aft by about 1/4-in! The major justification for buying this masking set in the first place was that there is no scribing on the canopy to aid in painting the band (or locating part 4H), so this provides an extra challenge. The set is still useful, but DO NOT apply the masks to the main canopy until the fuselage is assembled with part 4H installed. Then dry fit the canopy and apply the masks, which will need to be modified somewhat. The good news is that the curved parts of the masks are still usable, its just that the straight parts along the bottom of the frame will have to be shortened for the front section and additional masking added to the rear section. I found adding a strip of painters tape along the sill line useful to ensure the two sections are aligned. 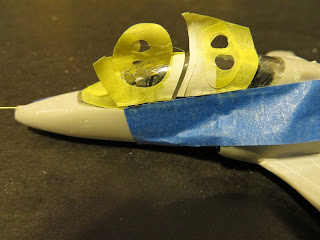 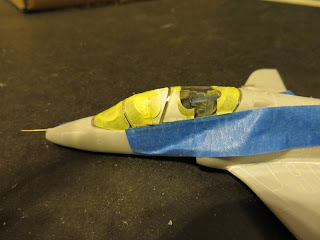 I also bought Eduard’s Zoom set (SS354), even though I’m not normally a big fan of PE. I found some parts of this set useful. When I bought the set I was concerned about the cockpit instrument panels, but they are so far beneath the glare shields that they really aren’t that visible. The new glare shields don’t fit well and the front one is too short by about 1/8 inch. However, there were a some of useful bits: The HUD frame is nice, but wait until ready to install the windscreen to add it, as it’s quite fragile (don’t ask me how I know!). The exhaust nozzle is nice, once I figured out how to install it  (inside a piece of 3/16” brass tubing to ensure it’s round). And the wing fences are nice, although I had to use a razor saw to cut a slot in the wing for them to fit into, as the opening for the wing is a tad narrow. That’s okay as they fit more securely in slots, but it would have been nice to know beforehand.
I used a pair of Pavala 72060 MB Mk.10H ejection seats. Nice seats, very detailed, but remember to order two!
For the pitot tube, I used the Master AM-72-020. Worked fine. It bent a little when I dropped the model, but straightened out nicely!
The little clear piece in the nose is a light. I drilled out the hole, inserted a piece of plastic rod, sat a rhinestone on top of it and finished it off with a drop of clear epoxy. Much better!
In short, it was a much bigger fight than I expected out of such a tiny kit.
﻿
Posted by Unknown at 3:31 PM