The theme of the May meeting was "Aggressors".  There were five theme builds and eight non-theme builds.

May's honored "Golden Clamp" award winner was Nick Kessel for his pair of Top Gun A-4E models.  Members had a hard time picking between the 1/72 Fujimi kit and the 1/48 Monogram kit.  The Fujimi kit represents "Top Gun 56" that was built completely OOB including the kit decals.  The nicely done MiG silhouette was painstakingly hand masked and painted. 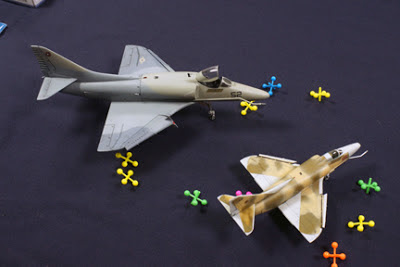 The old but venerable Monogram kit was also built OOB with added Sidewinder launcher and adapter as well as the In Flight Refueling Probe from a Hasegawa kit.  Decals are from Superscale to represent "Top Gun 52".

Jim Rotramel's theme entry is his Monogram 1:48 F-20 Tigershark in a "What If" USAF aggressor scheme.  The kit was built OOB except for the captive Sidewinder and AIS pod that were taken from his spares box. Jim also used rhinestones for the wing nav lights. 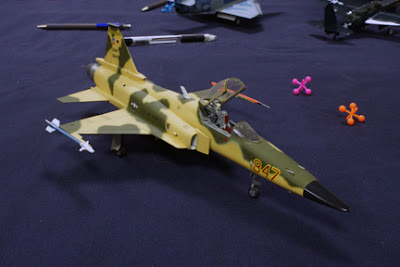 Another 1:48 A-4 Skyhawk for the theme build was this "Super Fox" model built by Joe Hegedus.  Joe started with the excellent Hasegawa kit and added a True Details seat, Cutting Edge "hotdog" antennae on the tail, and a TACTS Pod from the Hasegawa weapons pack.  Markings are from either a Fightertown or Afterburner decals sheet. 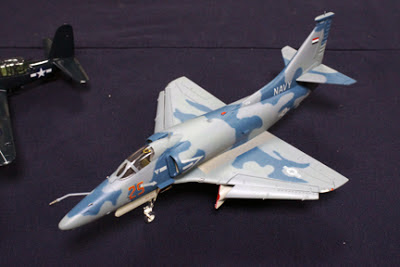 The final theme build was this 1:48 Italeri F-15 built by Ryan Turgeon.  This was the kit that Ryan used to make his return to modeling.  Ryan added Aires resin exhaust cans and Afterburner decals to represent an airframe from the USAF 65th Aggressor Squadron. 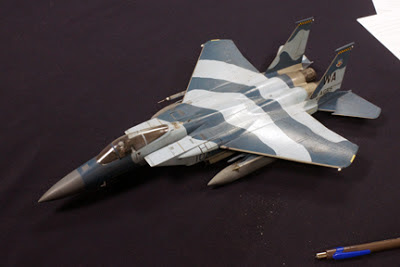 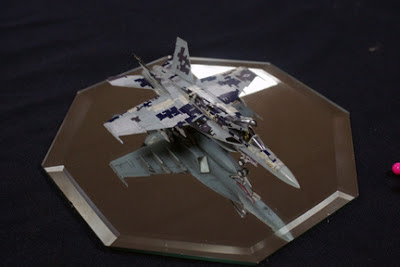 Besides his A-4, Joe Hegedus also brought along a pair of Glossy Sea Blue (GSB) aircraft.  The first is the XTB2D-1 Skypirate.  The Douglas torpedo bomber was built from a Planet Resin 1/72 kit with a tailhook fashioned from a paper clip and new prop shafts made from brass tube. Joe's second GSB model was also built from a resin kit.  The Czechmaster 1/72 TBY-2 Seawolf was built almost OOB, with main landing gear struts from a Wings 72 Seawolf kit and the propeller from a Tamiya Corsair.  The markings represent a NATC service test aircraft from 1945. 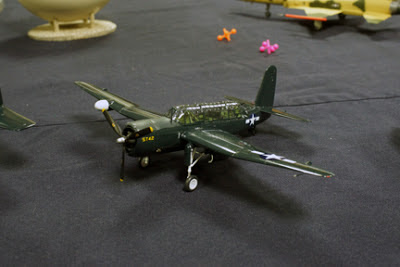 Moving along in 1/72, we have a wonderful Boeing F4B-4 built from the excellent Monogram kit.  Ken Kelly completed this build in his usual style of a brush painted paint job with Polly Scale paints and EZ line rigging.  Ken added a scratch built seat, floor, yoke, and panel to the otherwise sparse kit cockpit. 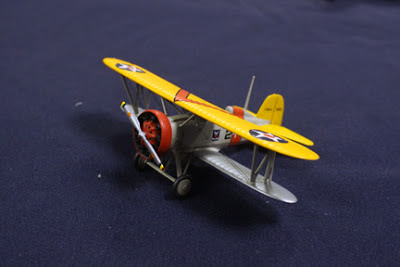 John Bray was along with a pair of nicely done diorama's, including this very unusual Ostrich Egg diorama.  The center piece of the diorama is actually the egg itself with John fashioned from an actual ostrich egg.  A nicely done Ostrich figurine was added in front of a hand painted mural of Mt. Kilimanjaro. 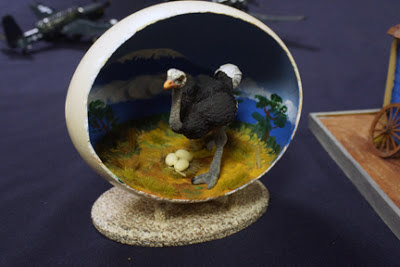 John's second diorama represents the (in)famous shootout at the OK Corral.  The diorama is done up in 1/32 scale with Black Hawk Toy Soldiers figures that were repainted and placed between a pair of scratch built period buildings which were made from construction board. 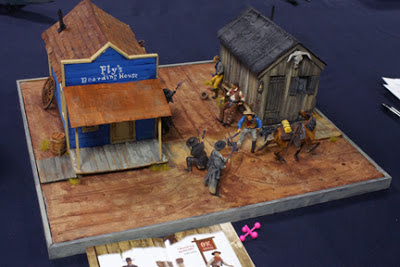 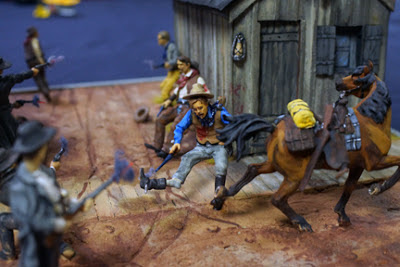 Equally impressive was Collin Tatsuko's beautiful Bf-109E Trop.  Collin built the 1/32 Eduard kit OOB and finished it with Model Master paints.  The green blotches were free handed with his new Sotar 20/20 airbrush.  All paints were thinned with Mr. Leveling Thinner by Gunze which Collin endorses as "Awesome". 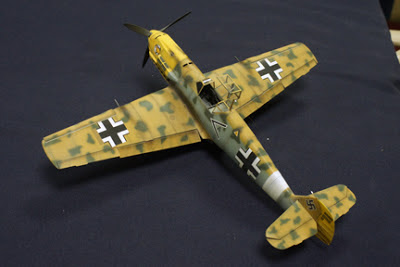 Rounding out this month's builds is the unique Japanese Type 94 Combat Car built by "Doc" Haugh.  The 1/35 Fine Molds kit was built OOB with a Soviet tanker figure added for scale reference.  Doc reports that the tracks were a bit too short in the otherwise excellent kit.  And yes, they did fit more than one person in there! 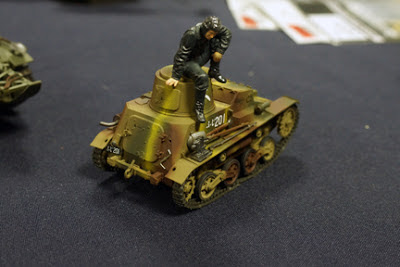