August's meeting theme was "Amnesty", any model built for a theme that you missed.  There were 2 in progress builds and 11 completed models for show and tell, none of which were theme related.  I guess they'll bring the theme builds next August..

Starting off our in progress update is Dan Yakel with his 1/35 Tiger I late.  Dan started with the Tamiya kit and added an aluminum barrel, lots of photo etch and 2 types of Zimmerit coating, both self adhesive and brass.  Dan decided to go primarily with the self adhesive type due to the ease of application. 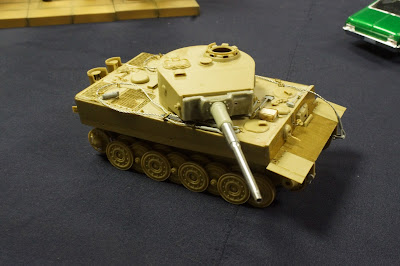 Next up is Joe Hegedus with the brand new Tamiya 1/32 F4U Corsair.  Joe reports that thus far, it is an outstanding kit. For completed builds, we start off with a nice model of The Three Stooges.  No, that's not Jonathan Wright, Chuck Connor, or Tim Holland, but rather the real Three Stooges as depicted in the 1939 film, "We Want Our Mummy".  Mike Colvin combined the three Polar Lights 1/8 scale kits which he finished with a combination of airbrushing and hand painted details. 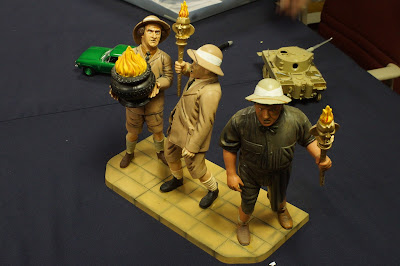 Besides his Tiger I, Dan Yakel also brought along a couple of finished models.  First up is the Dragon 1/35 Su-122P.  Dan added an aluminum barrel and a resin engine to an otherwise box stock build. 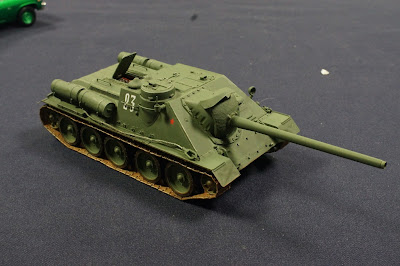 Also finished in green is Dan's 1/25 1969 Chevy Nova.  Dan built the kit out of the box and added chrome detailing on the front and rear windshields with foil. 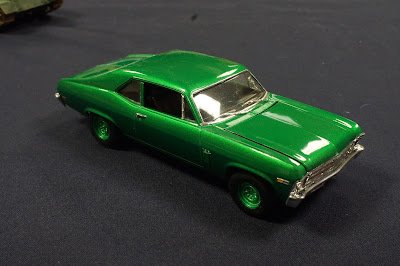 Making the visit up from Virginia Beach was Chuck's grandson, Tristan Colon, with his Bandai 1/144 Gundam which he built out of the box. 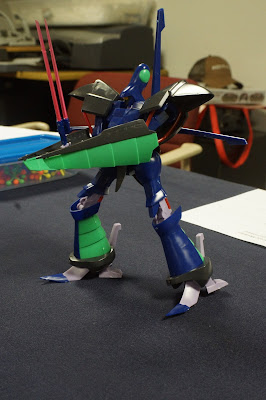 John Bray was present with two of his usual excellent builds.  John built his Nautilus from the new Pegasus Hobbies 1/144 kit.  The kit represents the Jules Verne version from 20,000 Leagues Under the Sea, and is loaded with detail, and even includes the Giant Squid display base. 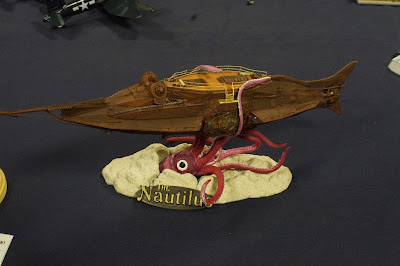 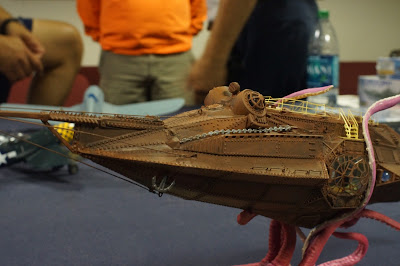 John also brought along his 54mm Lone Ranger and Silver.  Also mounted along with the Andrea Miniatures figure is a 1950's official National Defenders Silver Bullet. 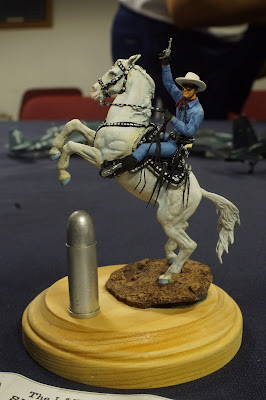 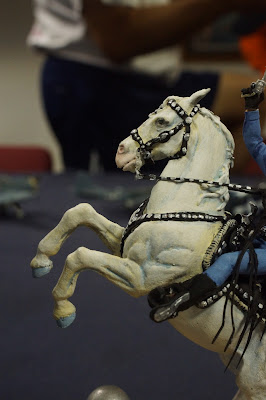 Getting back to our usual fare of aircraft models is a nice pair of Hurricanes from Jonathan Wright.  The first Hurricane is the old 1/72 Airfix mold of the Mk. I finished in a Lend-Lease Russian scheme with decals from Empire City. 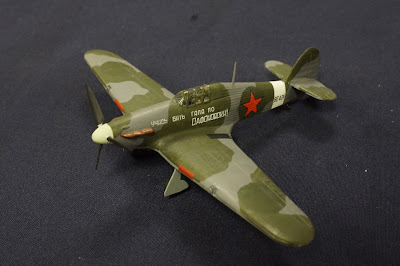 The Mk. IIc Hurricane was built using the Revell of Germany 1/72 kit and was built completely out of the box including the kit decals. 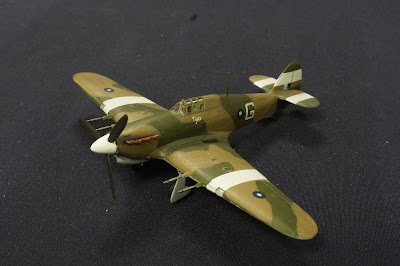 Last but not least was three builds by Joe Hegedus, the first of which is another Corsair to add to the collection.  This example is the XF2G-1 Corsair built from the 1/48 Special Hobby/Accurate Miniatures kit.  Joe replaced the kit landing gear with SAC metal struts while the propellor was sourced from a Monogram P-47.  The cockpit is a hybrid of kit parts as well as those from a Hasegawa F4U-4 and the markings are a combination of decals from Red Gekko, the spares box, and hand painted checkers on the cowling. 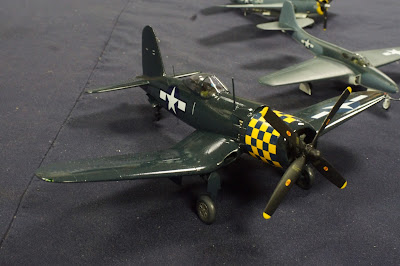 Joe also upgraded the Hasegawa 1/72 TBM-3 Avenger with bombs, propeller, and rockets taken from a Tamiya Corsair.  Markings represent a unit from VT-84 aboard the USS Bunker Hill, Feb 1945. 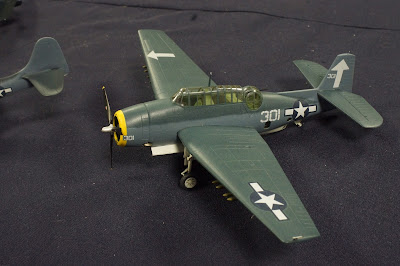 And finally, we have Joe's 1/72 P-59A Airacomet built from the Special Hobby kit.  Joe added a True Details resin seat on an otherwise out of the box build. 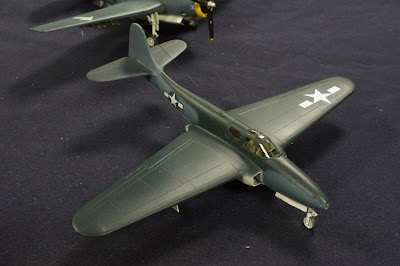 Posted by David Fuller at 10:02 PM No comments: