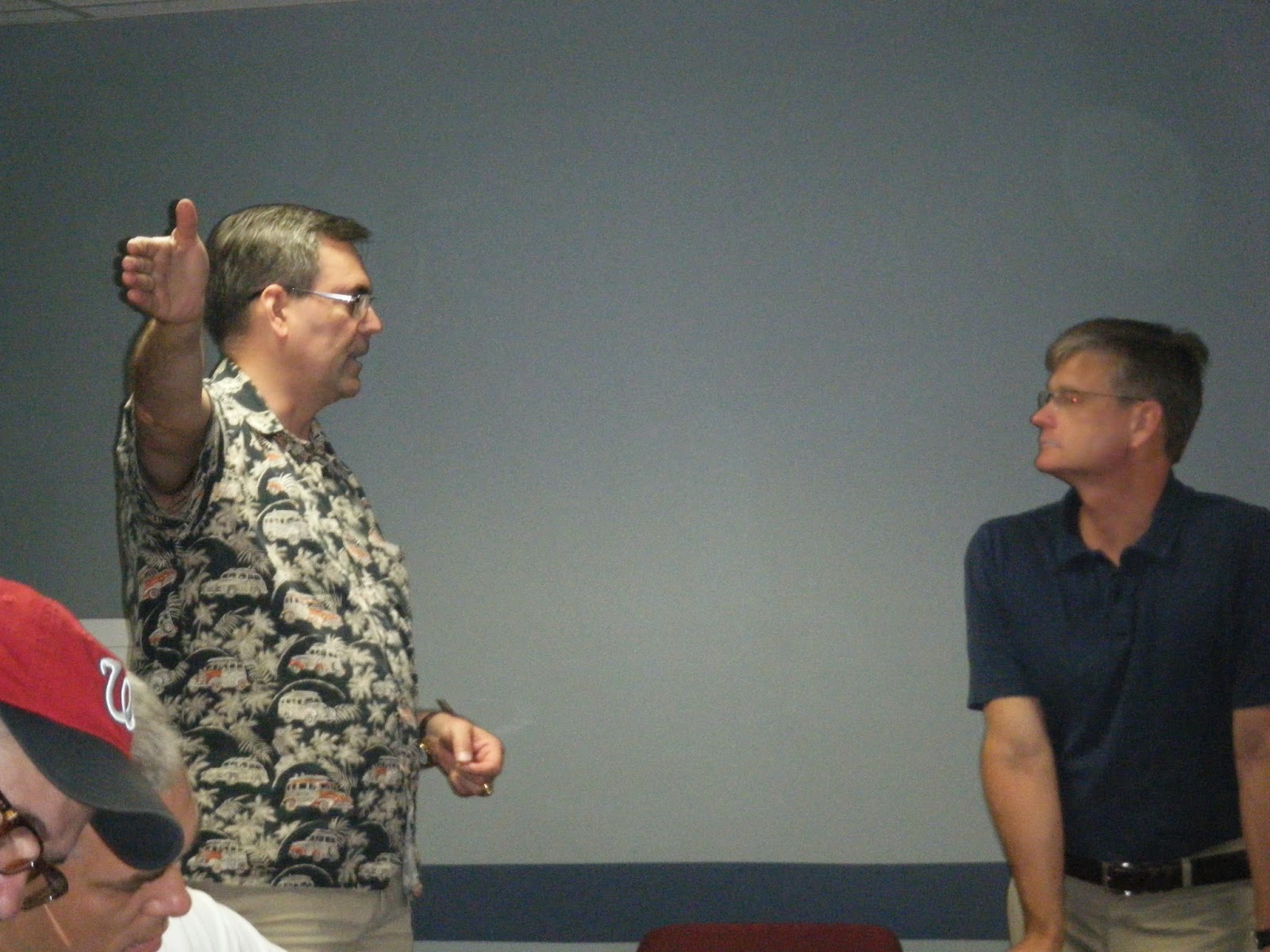 Tim Holland (left, above) is on holiday from his gig in England, and Collin Tatusko (right, above) has returned from his latest adventure. Andy Frill has also returned  home from The Sandbox but I was not able to get his picture. We are all glad to see Collin and Andy home safe and look forward to Tim returning home from England permanently, which should be sometime next year. 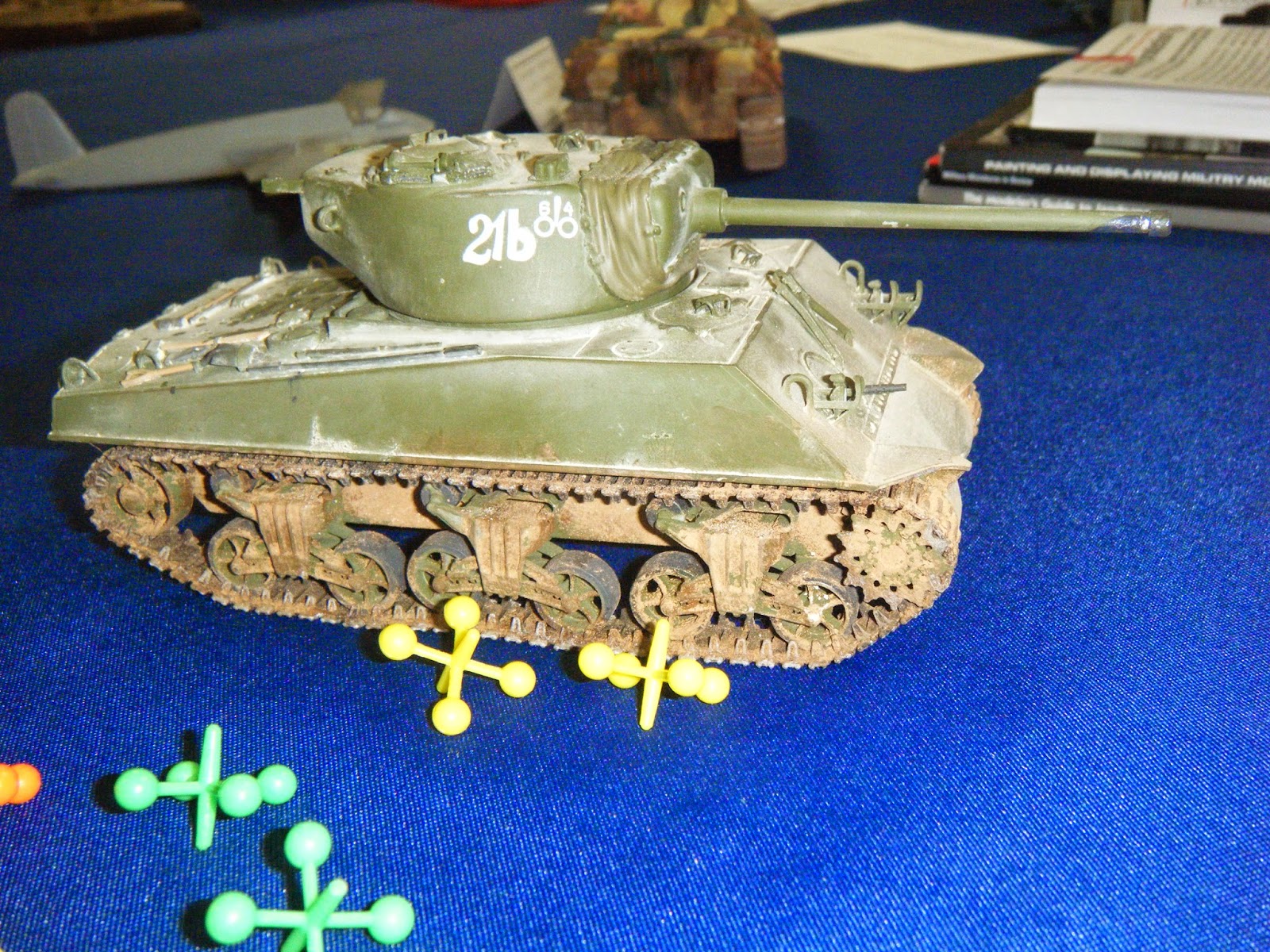 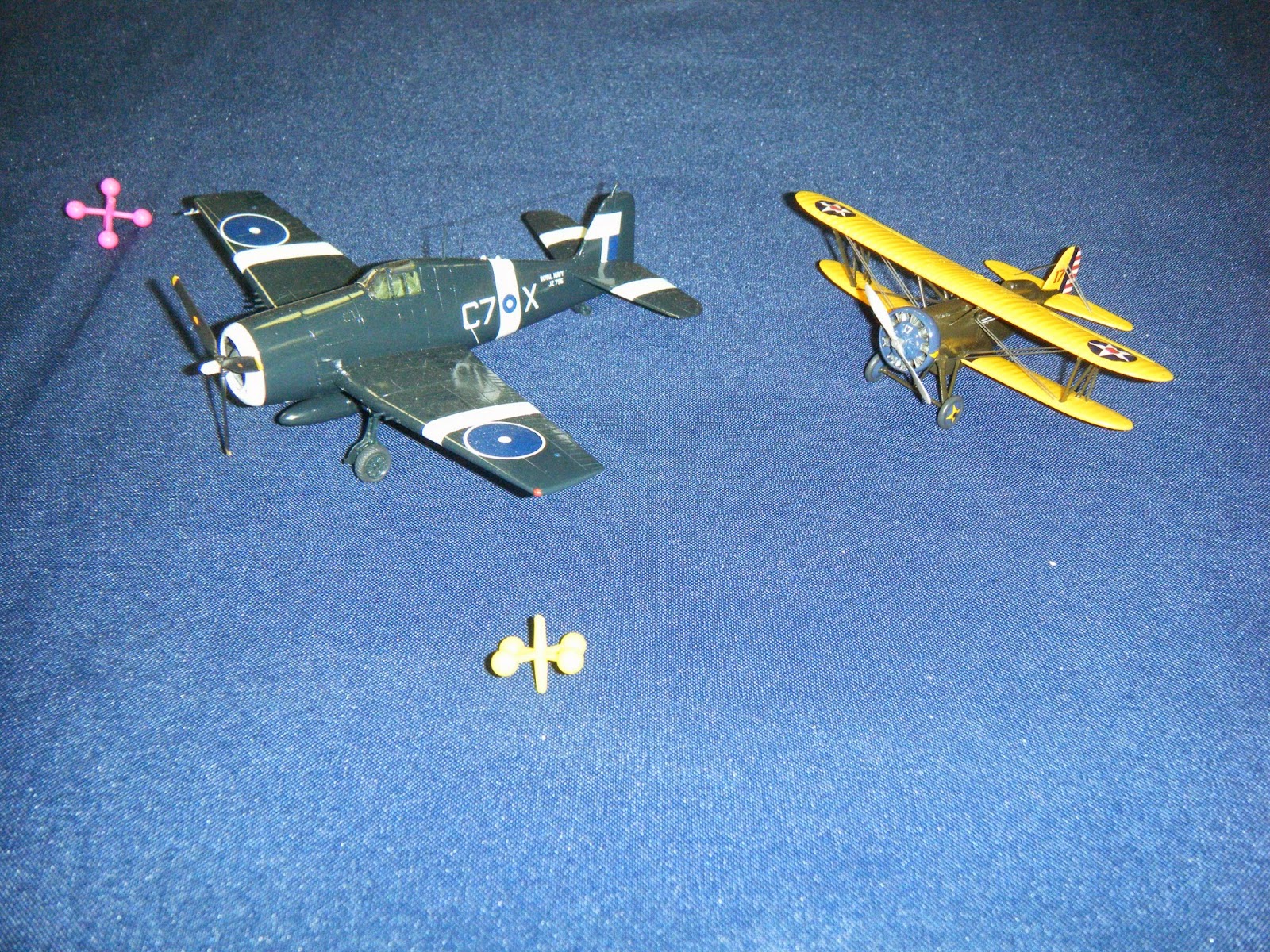 Joe Hegedus participated in the theme with a Hellcat II in Fleet Air Arm service (above, left).  Joe built the 1/72 scale Academy kit OOB except for the propeller which came from a Hasegawa box. He used Eduard decals to depict an aircraft operating with the British Indian Ocean Fleet. Parked next to Joe's Hellcat is a non-theme item, a P-12E built from a 1/72 scale Matchbox kit. Built OOB, Joe used Starfighter decals and rigged the biplane using 0.015" wire. 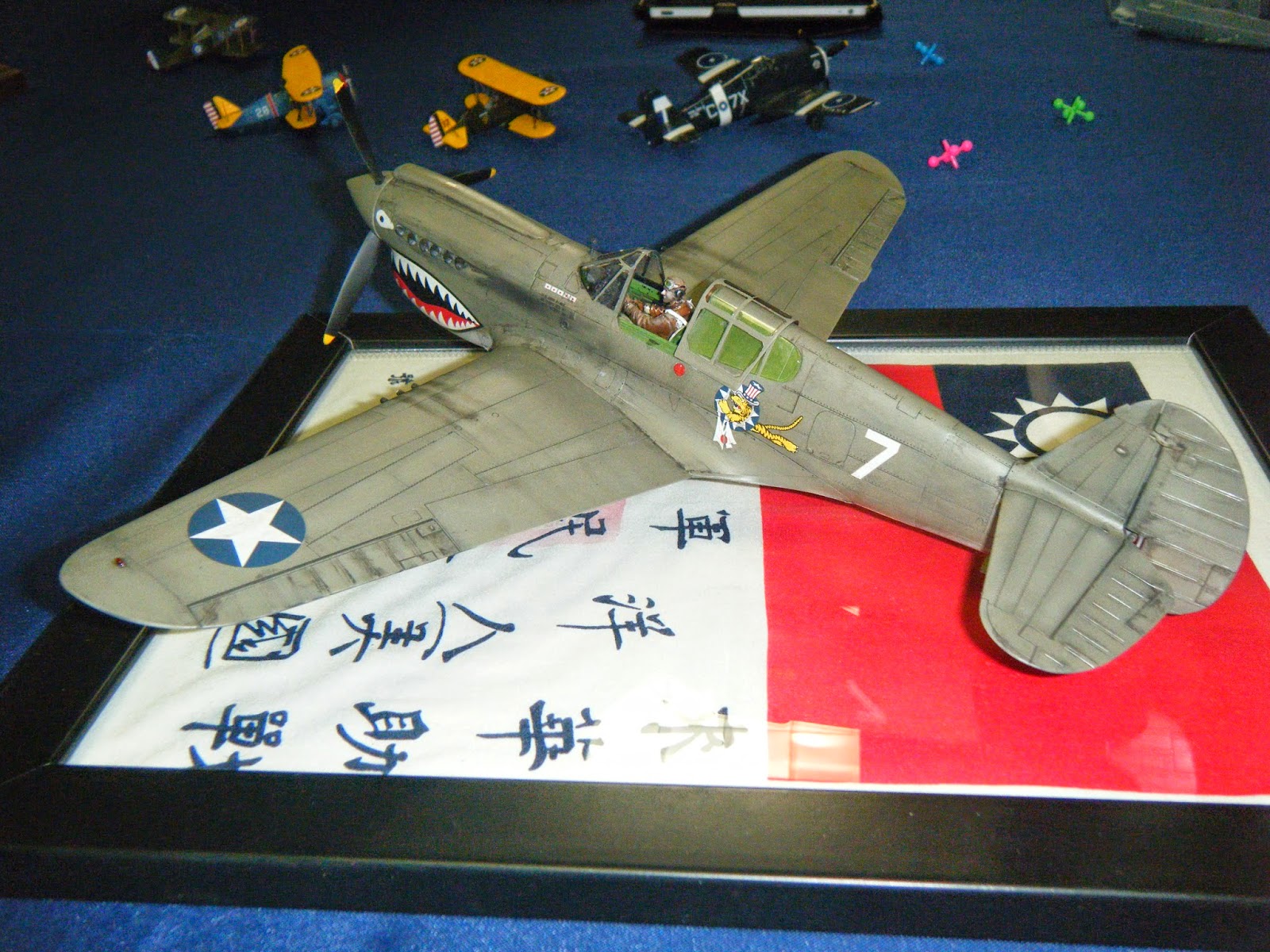 Brent Ledig rounded out the July theme builds with his P-40E. Though the plane has US markings it was being flown in Chinese service, and the group consensus was that it qualified for the theme. Brent built the 1/32 scale Hasegawa kit OOB and creatively used a craft store picture frame to achieve a striking display. 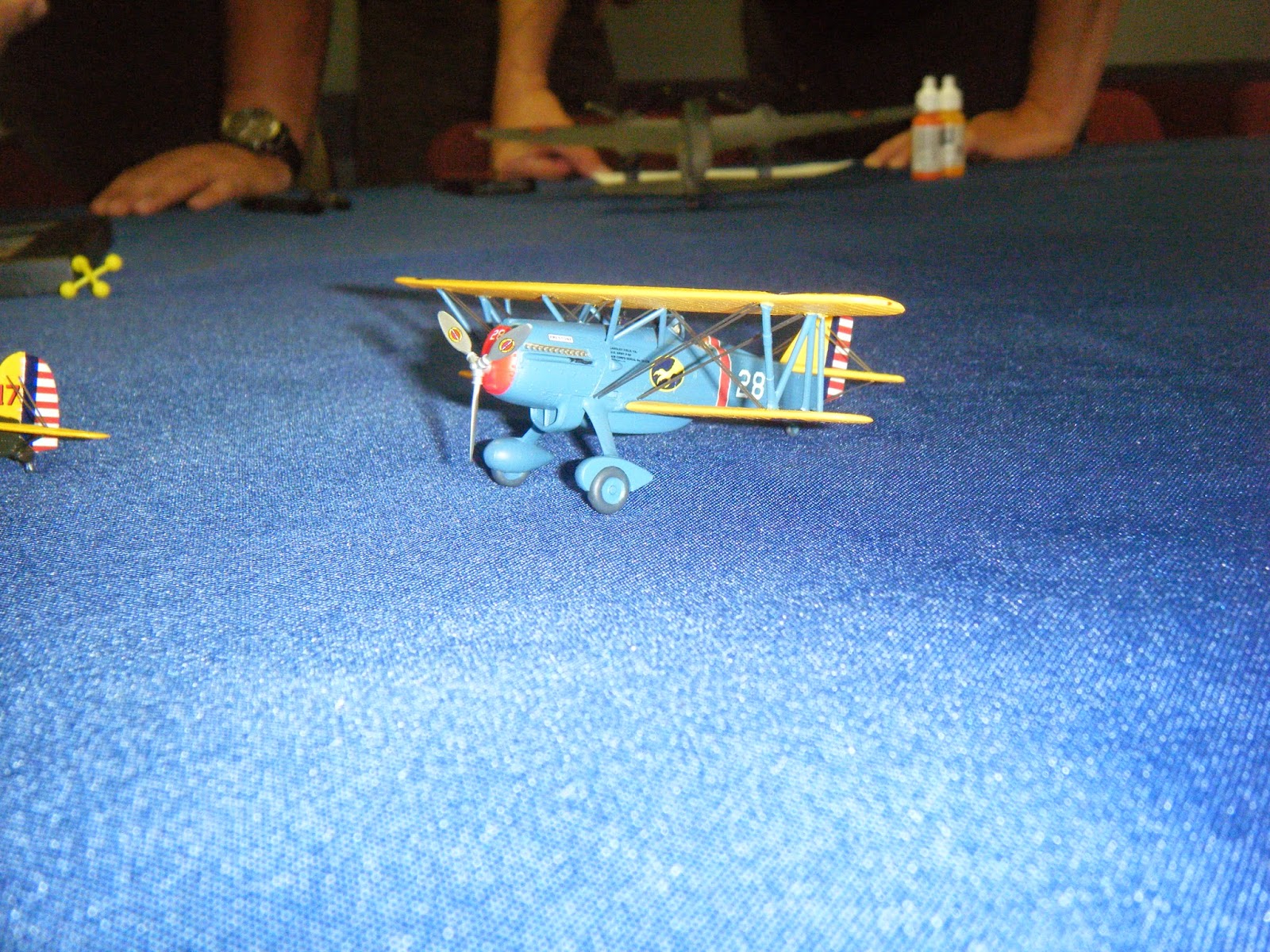 Joe Hegedus also displayed this 1/72 scale P-6E Hawk. Joe added interior detail to the Monogram kit and modified the landing gear to represent a later configuration. Starfighter Decals provided the markings and the rigging is 0.015" wire. 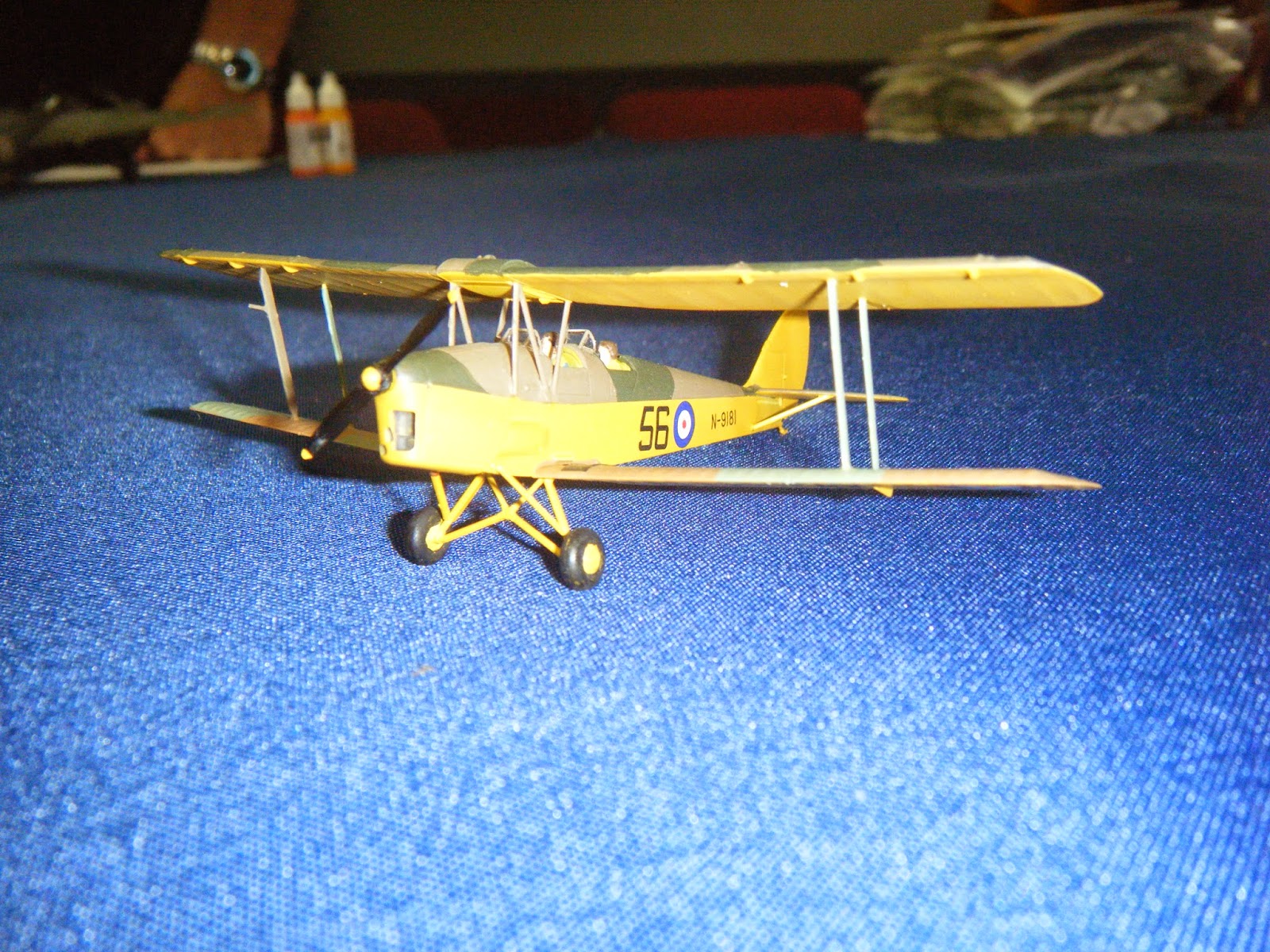 The first of three biplanes that Jon Wright brought to the table, this 1/72 scale Tiger Moth was built OOB from the Airfix kit. 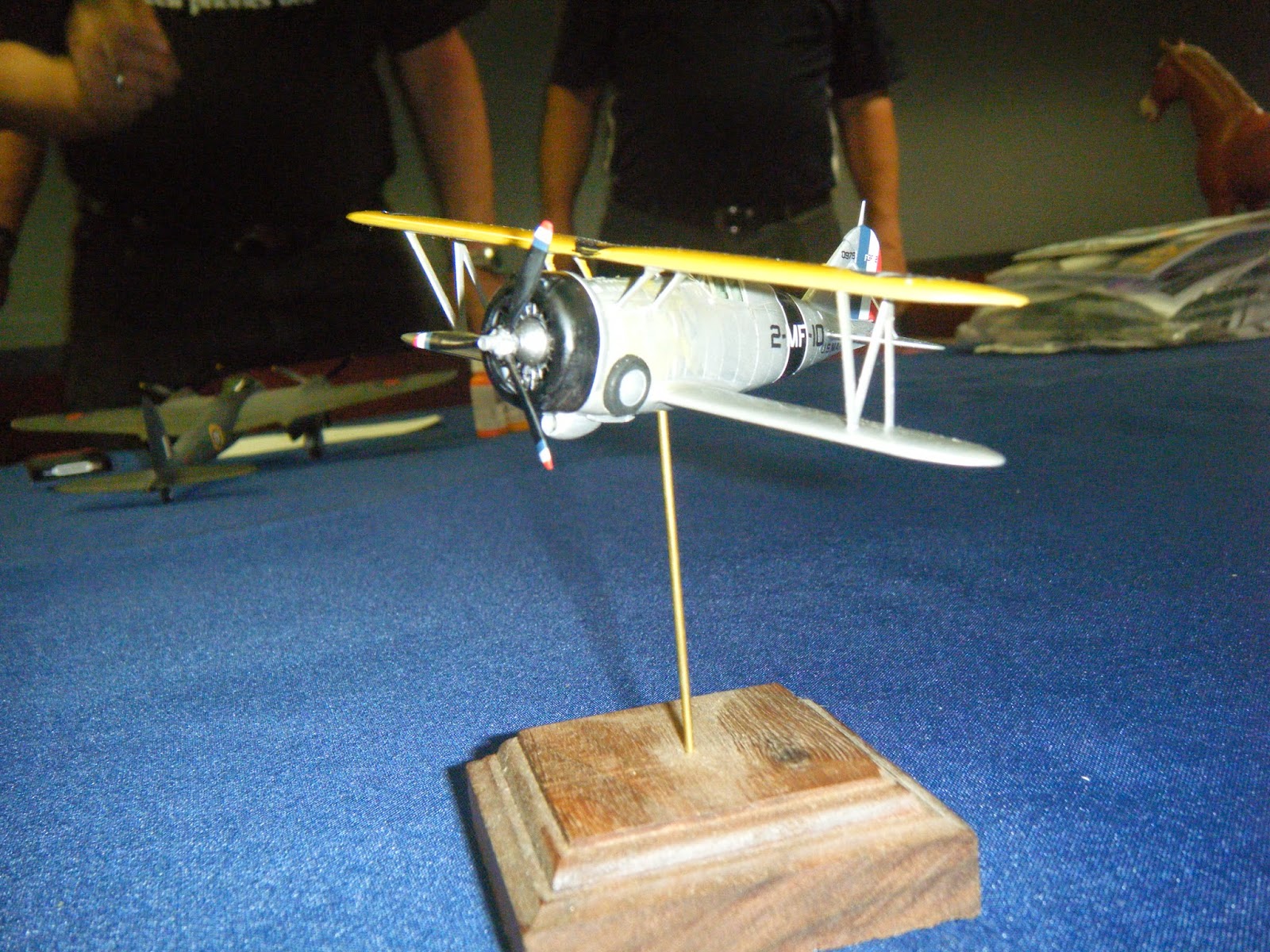 Jon built this F3F-2 OOB from the Special Hobby kit. 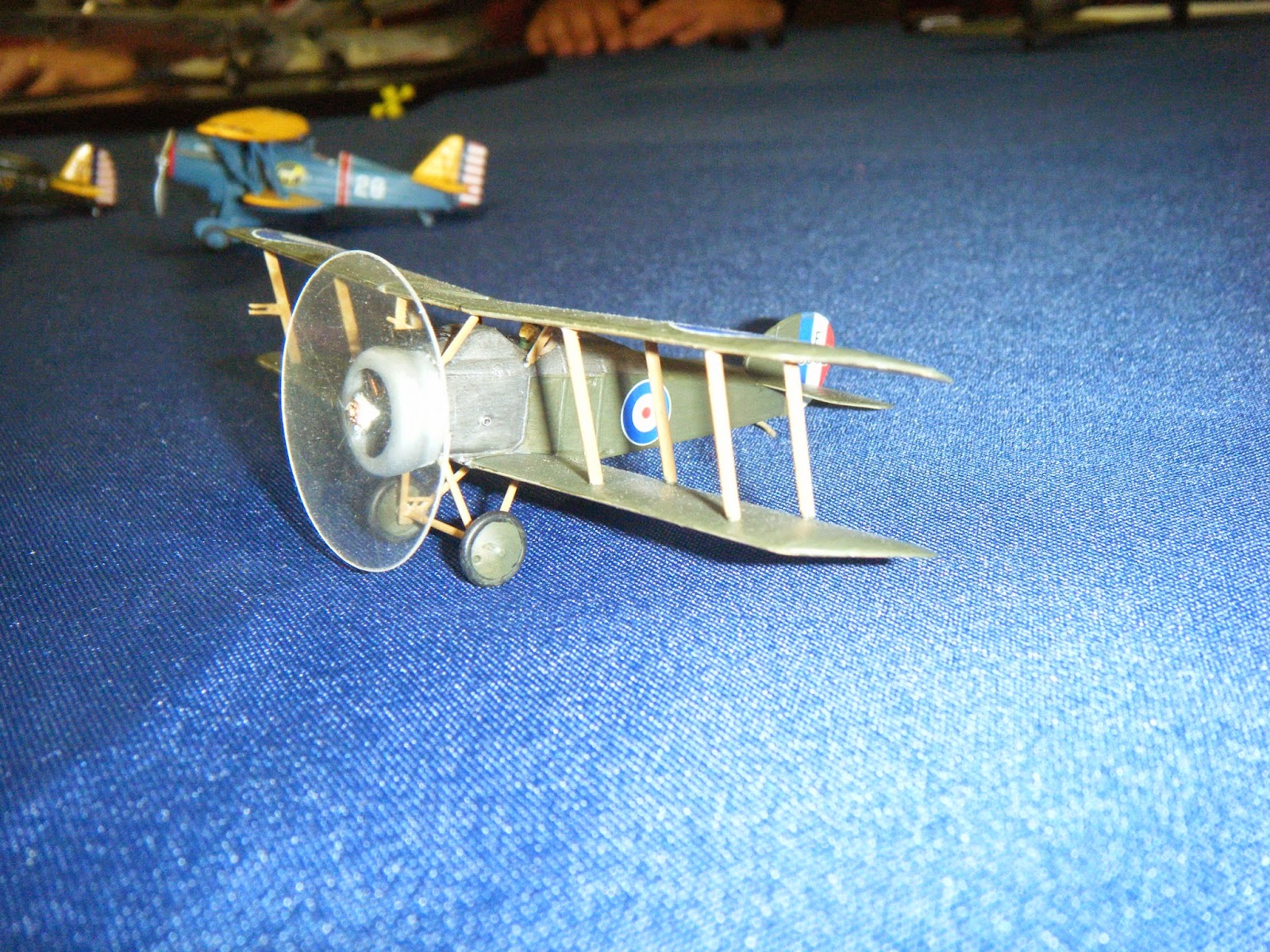 This Sopwith Salamander was built OOB from the 1/72 scale Roden kit. Jon says this subject will be included in a diorama for a future theme build. We can't wait to see it! 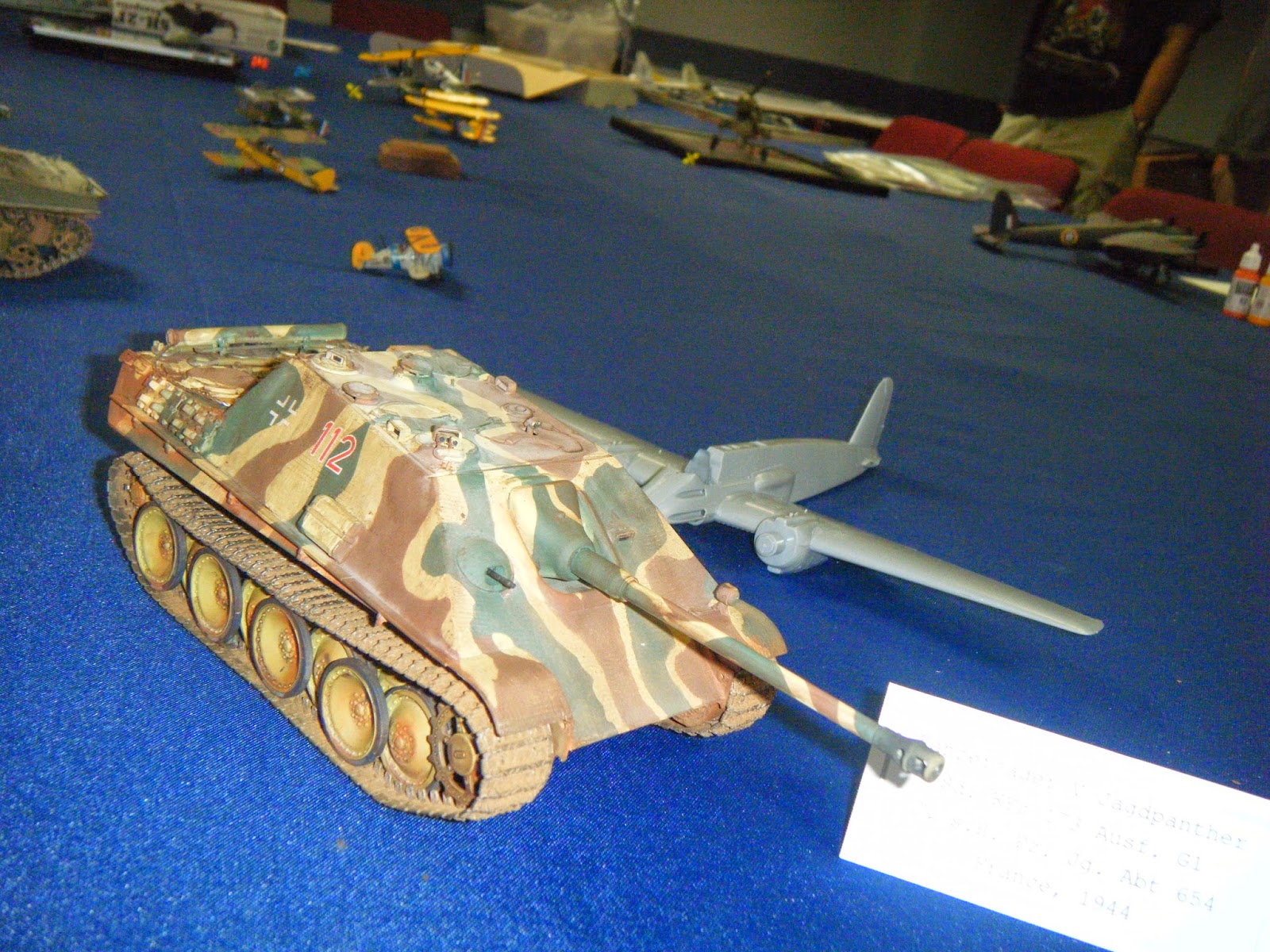 Dan Yakel built this Jagdpanther from a 1/35 scale Dragon kit to depict a subject from Pz. Jg. Abt 654. Dan used Silly Putty as a masking medium to paint the camouflage, and highly recommends the technique. Between AFV projects, Dan cleanses his palate by building airplanes. Lurking behind the Jagdpanther is a 1/48 scale Hasegawa Hs-129. Dan is converting it to a B2 R2 version, which packs a 30mm cannon. 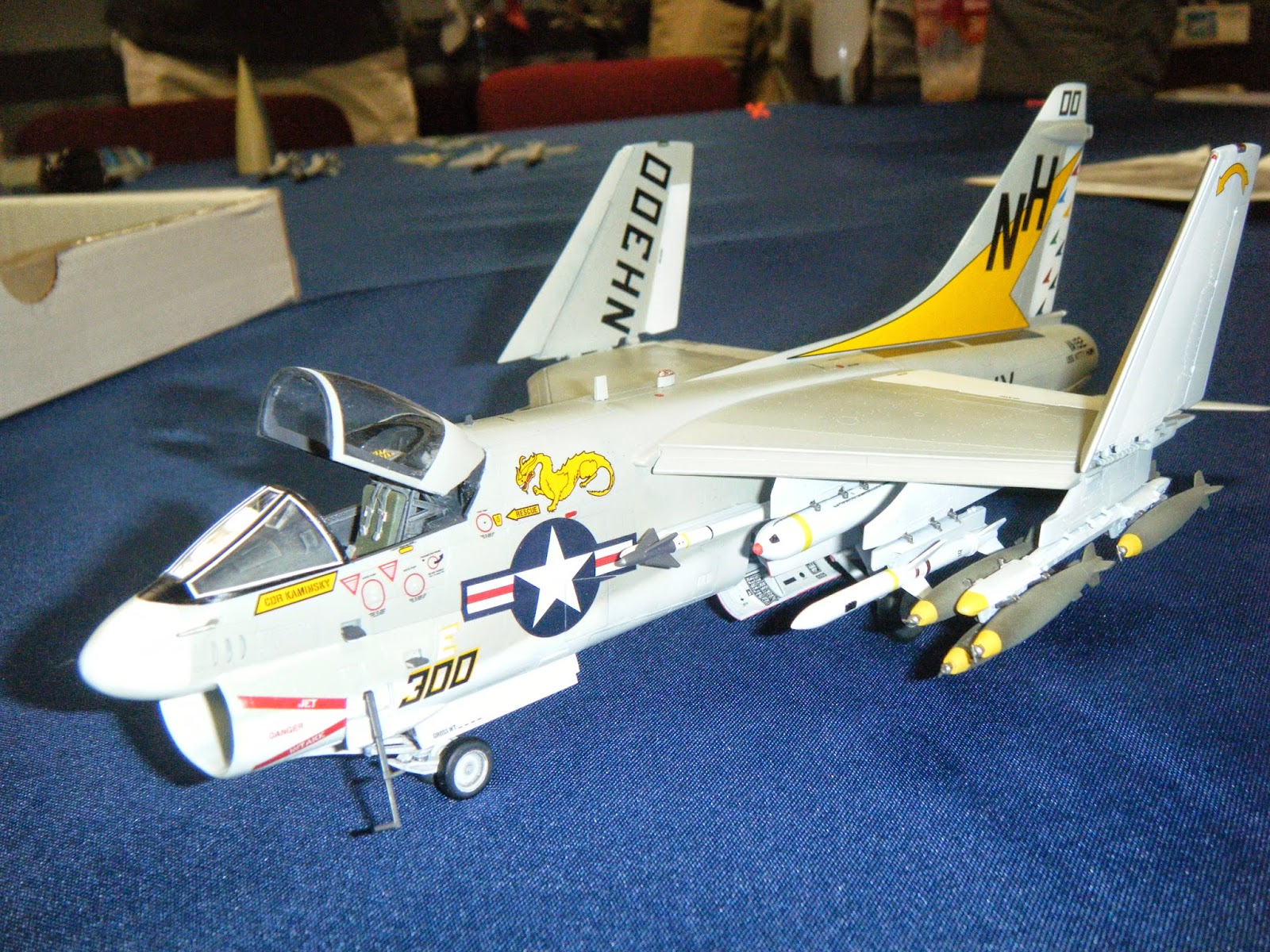 Collin Tatusko displayed this nicely finished A-7E Corsair II built from the Hasegawa kit. He said it took more than a year, but it's "Finally finished!" 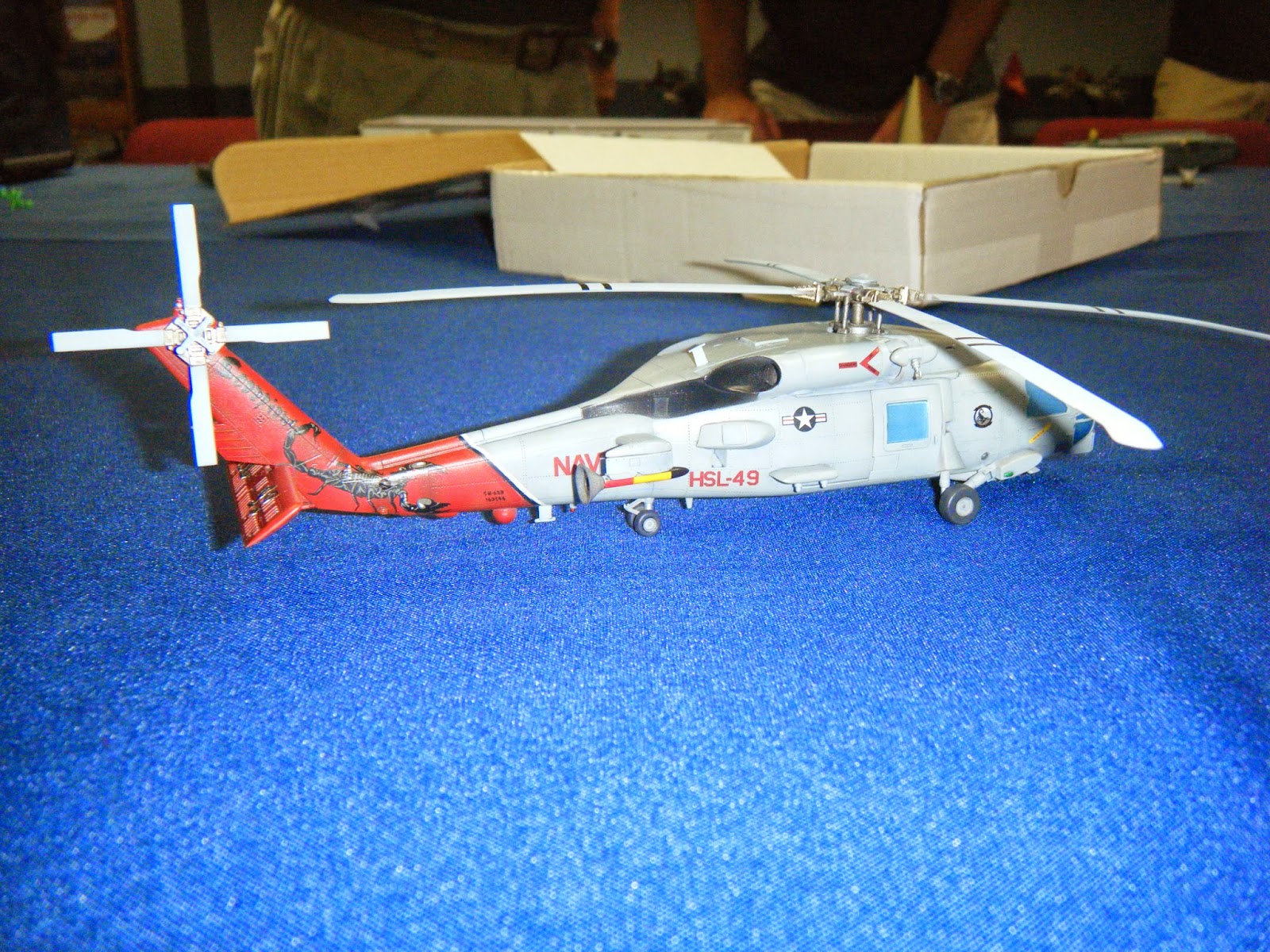 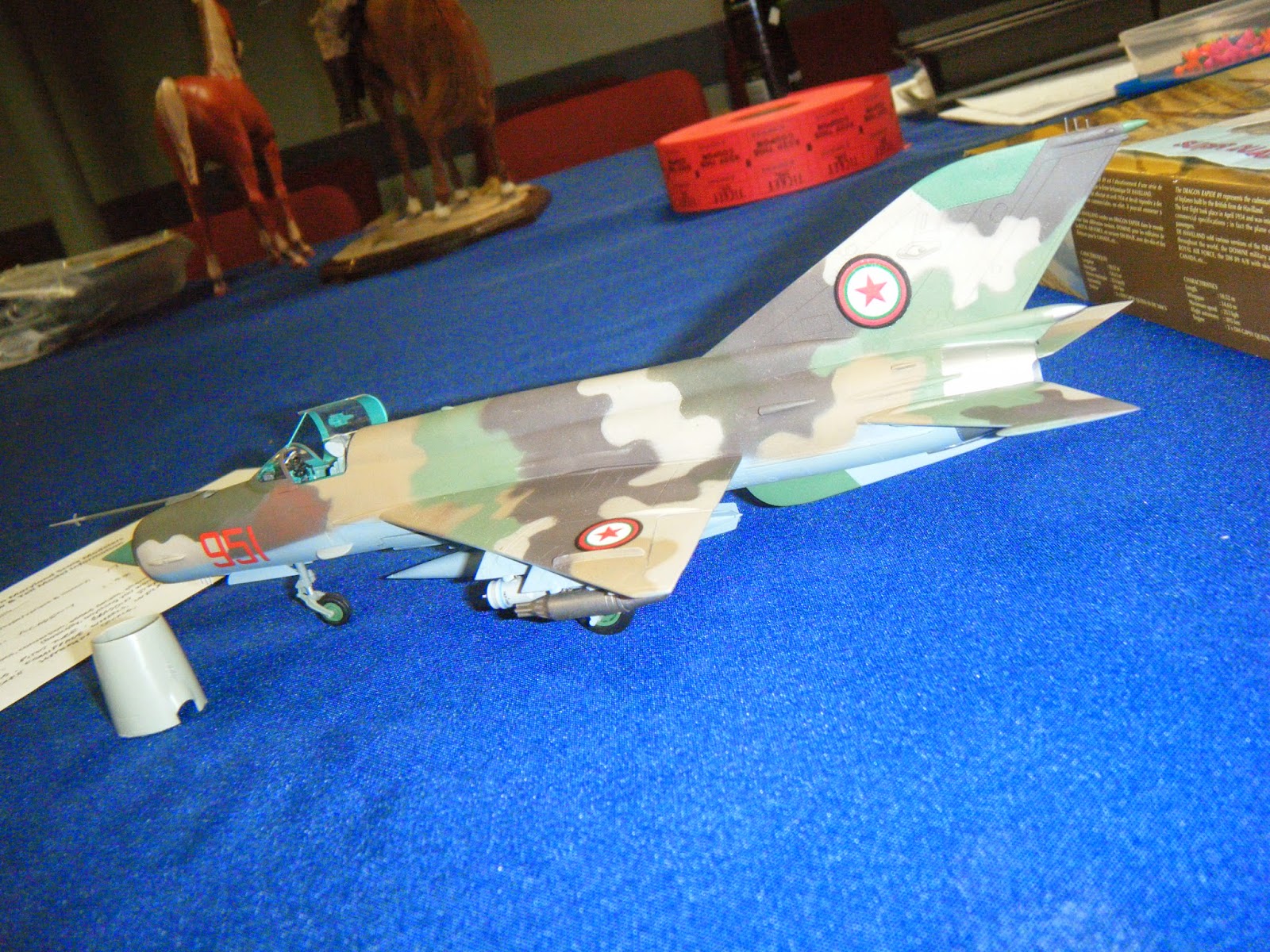 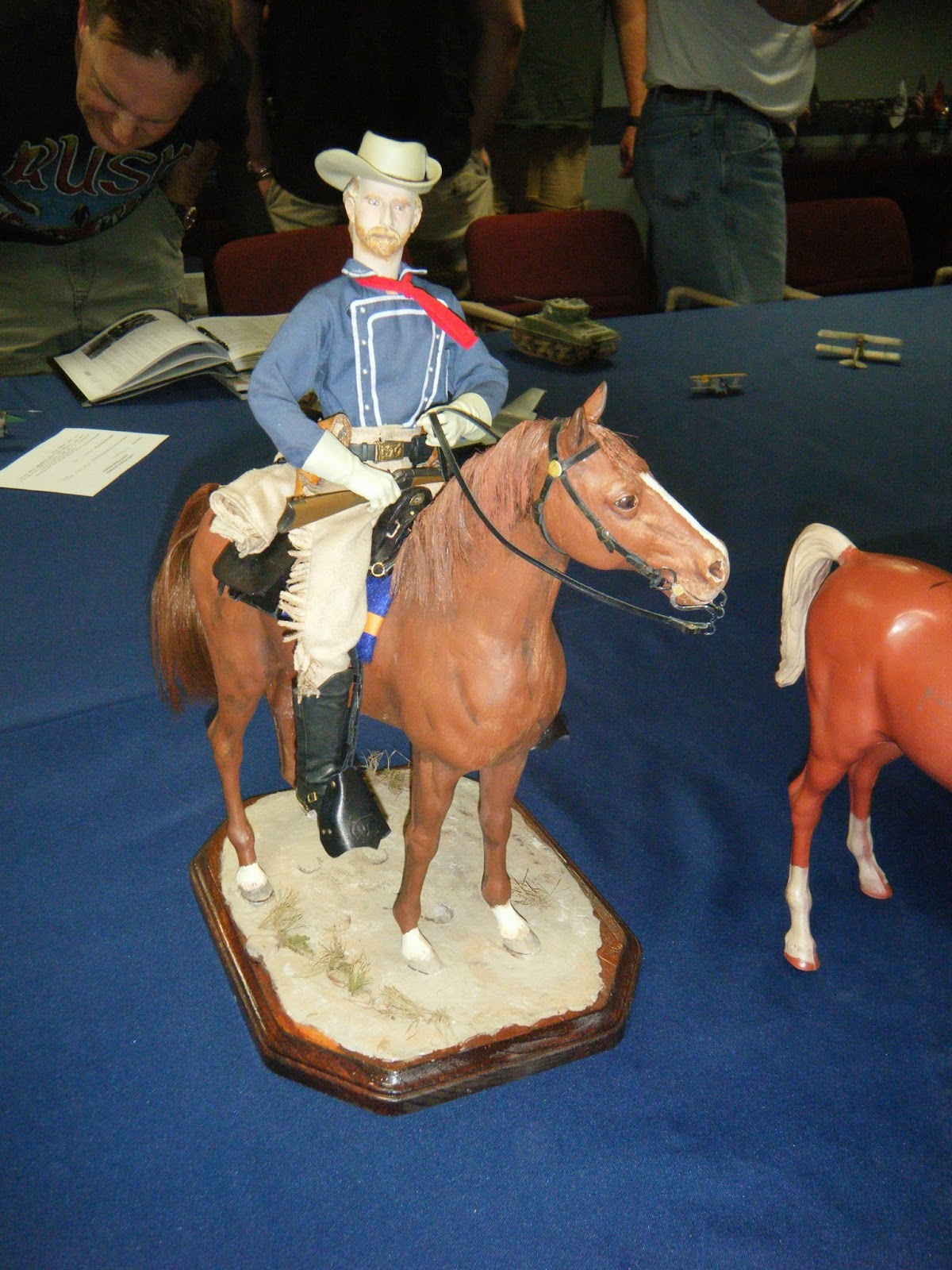 "Cowboy" John Bray calls this subject "In to the Little Big Horn Valley, 1876". John Painted up a General George Custer 12" figure from Six Gun Legends and added scratch built holsters. The horse is a modified Marx toy to which John added a scratch built 1874 McClelland saddle so that the General can ride comfortably to his destiny. 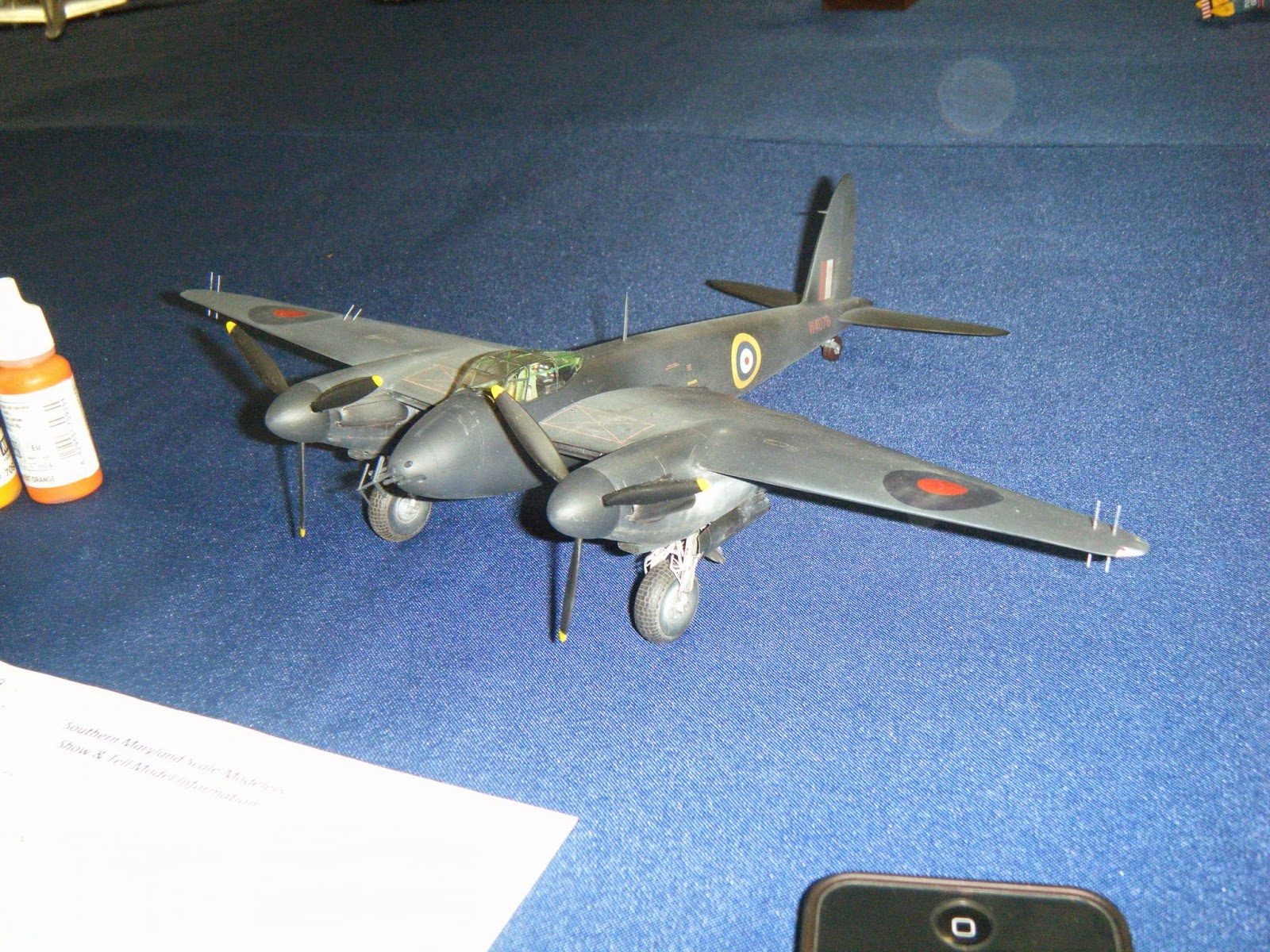 Ryan Jeffers displayed this 1/48 scale Mosquito NF Mk II built from the Tamiya kit. Ryan enhanced the build with Eduard details, a Squadron canopy, Barracuda decals, and a Quickboost gunsight. In addition to the aftermarket embellishments, Ryan corrected the wing aerials, scratch built and rigged the landing gear fenders, and back dated the radar set to a Mk IV configuration. Not quite up to Jim's level of AMS, but getting there. 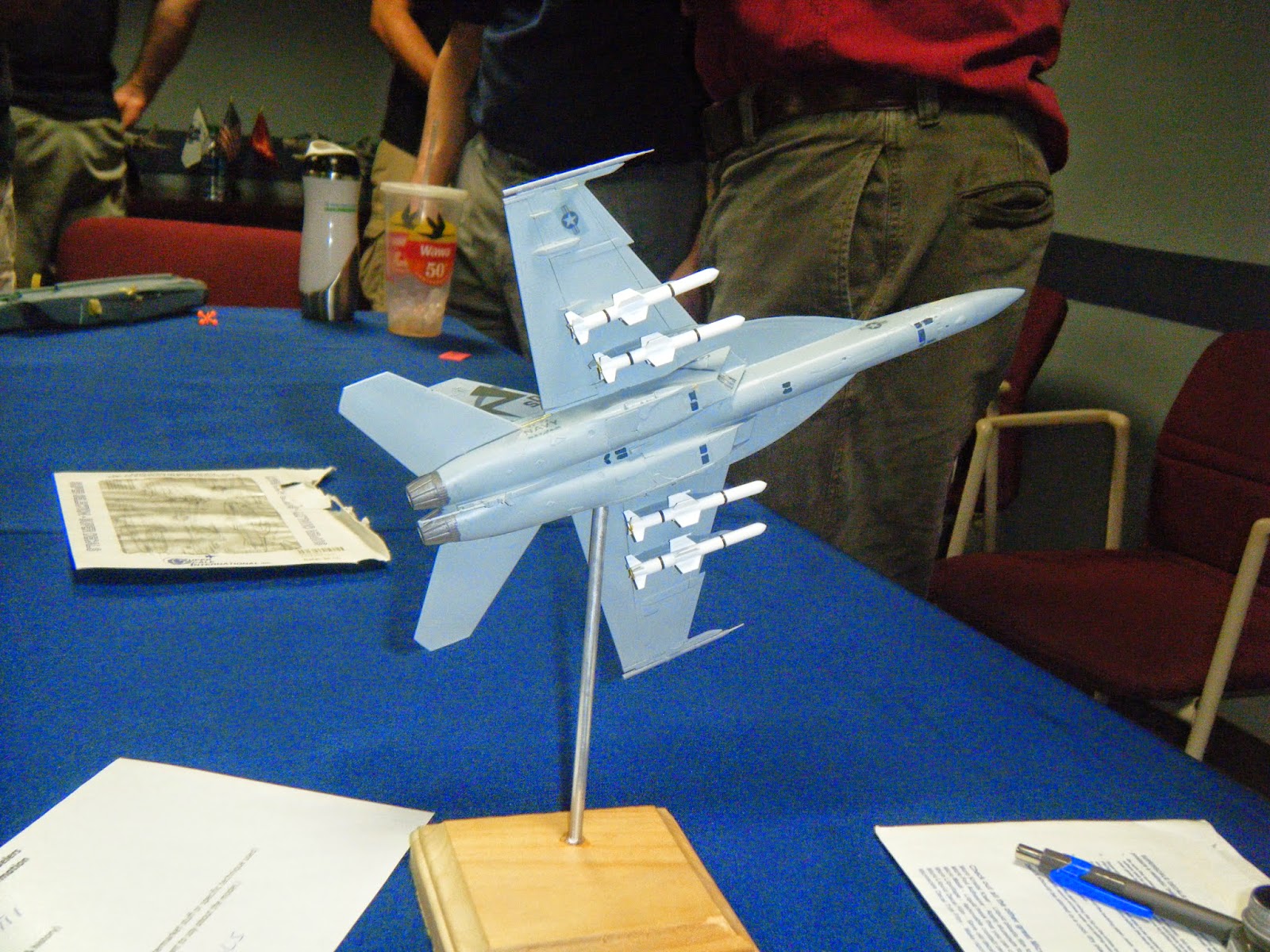 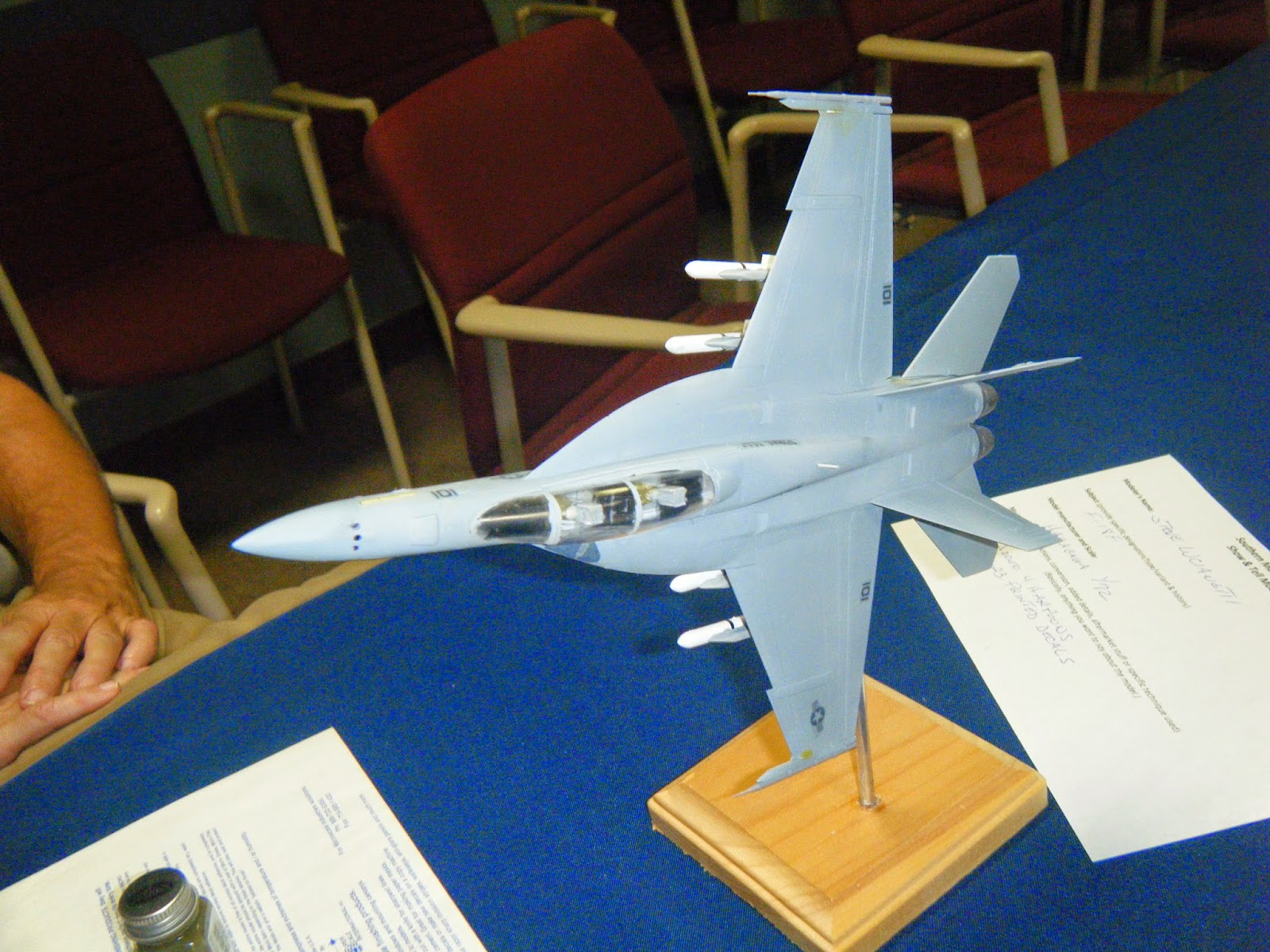 Steve Lucianetti Built this F-18F from the 1/72 scale Hasegawa kit. Inspired by a poster in his office, Steve added 4 Harpoon missiles under the wings and created the VX-23 markings using an inkjet printer.

The next meeting will be on August 21 and the theme is "Amnesty".  If you have completed a project that was not done in time for a previous theme month, you have another chance to win the coveted Clamp Award. See you there!
﻿
﻿
﻿
Posted by Unknown at 2:26 PM