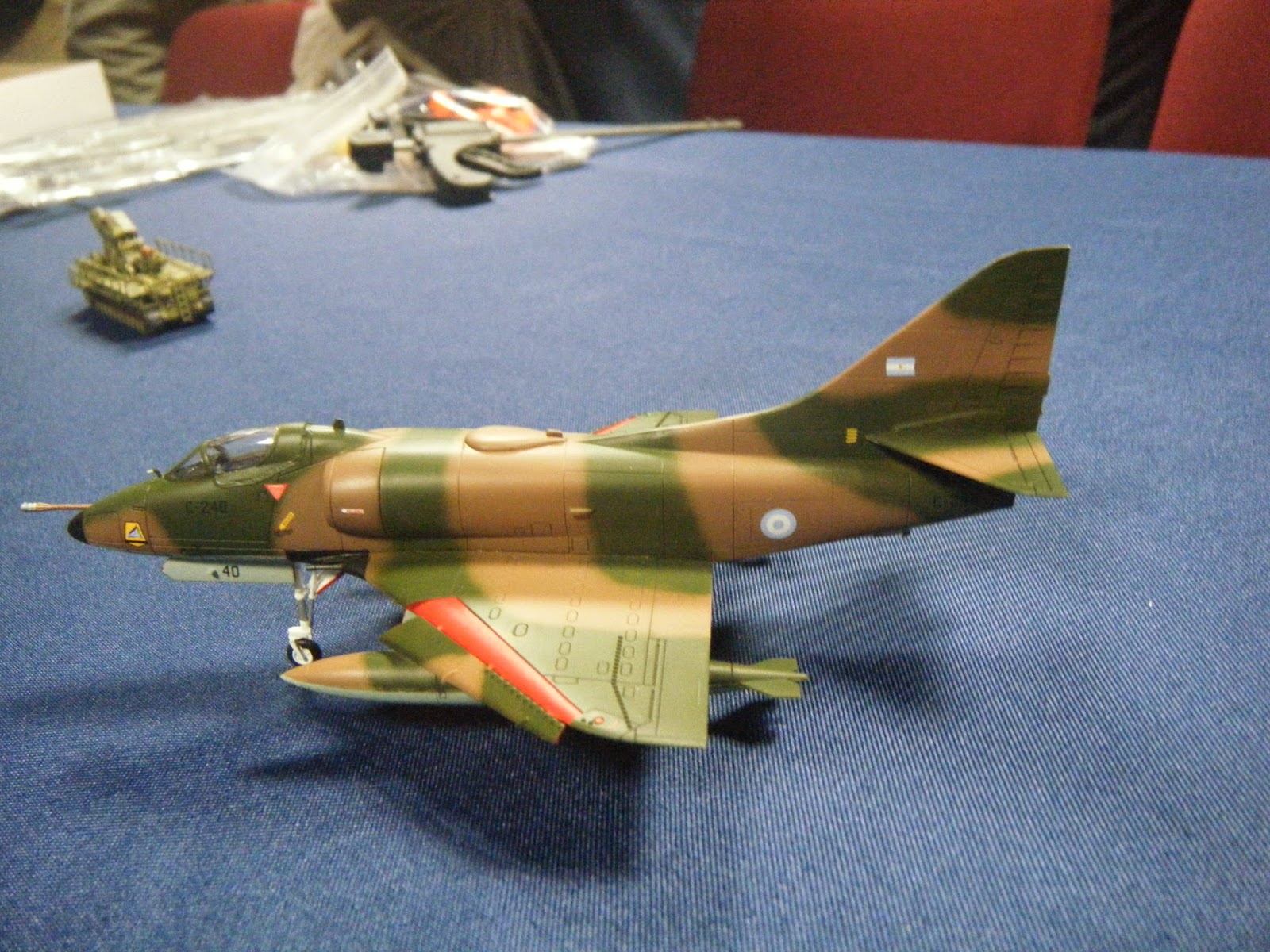 Nate Swift was the winner of the prestigious Platinum Clamp Award for the Best Theme Model. Nate built his Airfix A-4P Skyhawk OOB in markings of the Grupo 5 de Caza, Rio Gallegos, in April, 1982. Congratulations Nate! 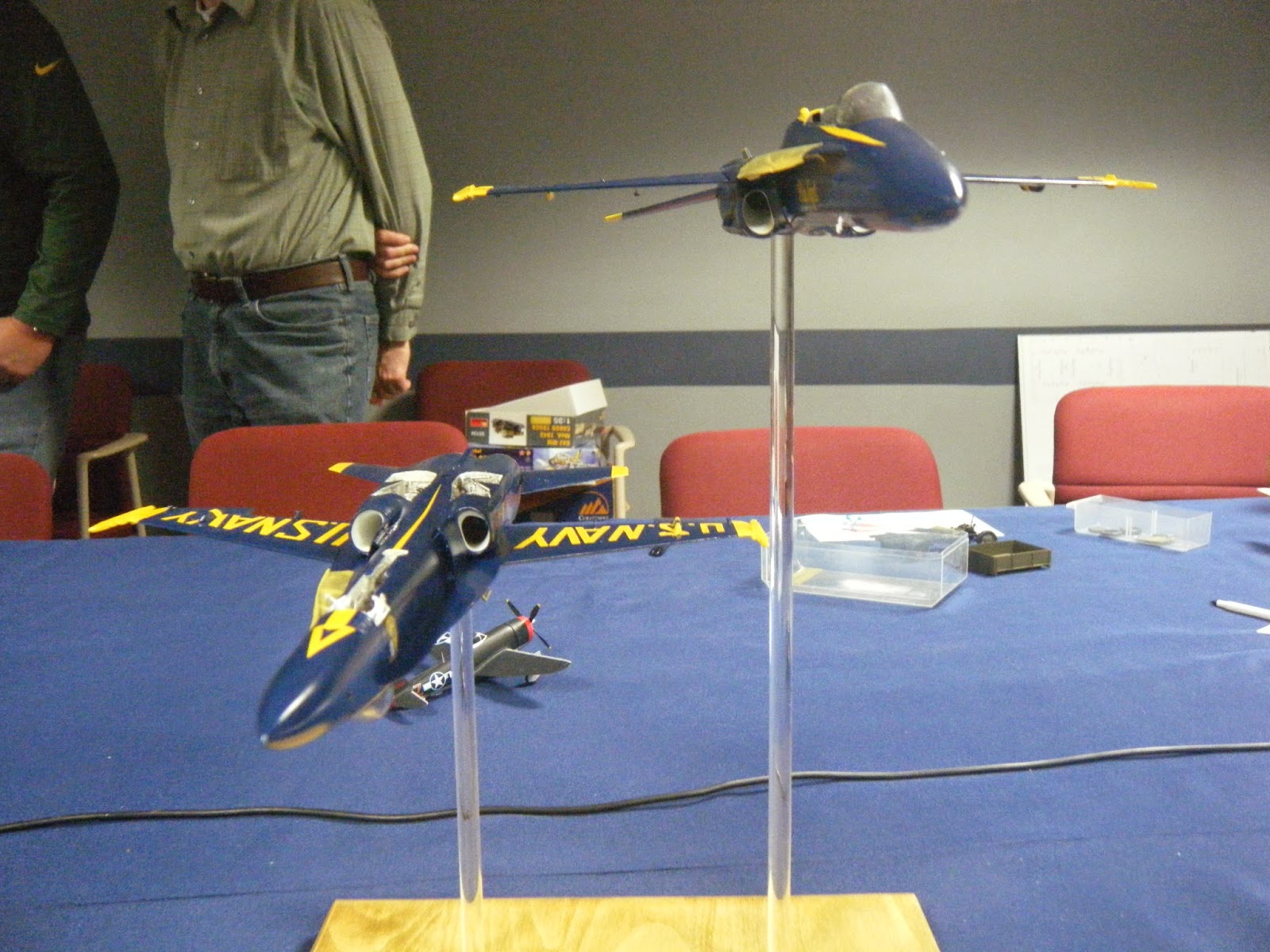 Ryan Turgeon Showed his in-work project of a Blue Angels "mirror image" pass. The kits are by Hasegawa and Ryan added exhaust nozzles and wheel bays from Aries. This will make for a most impressive display when complete! 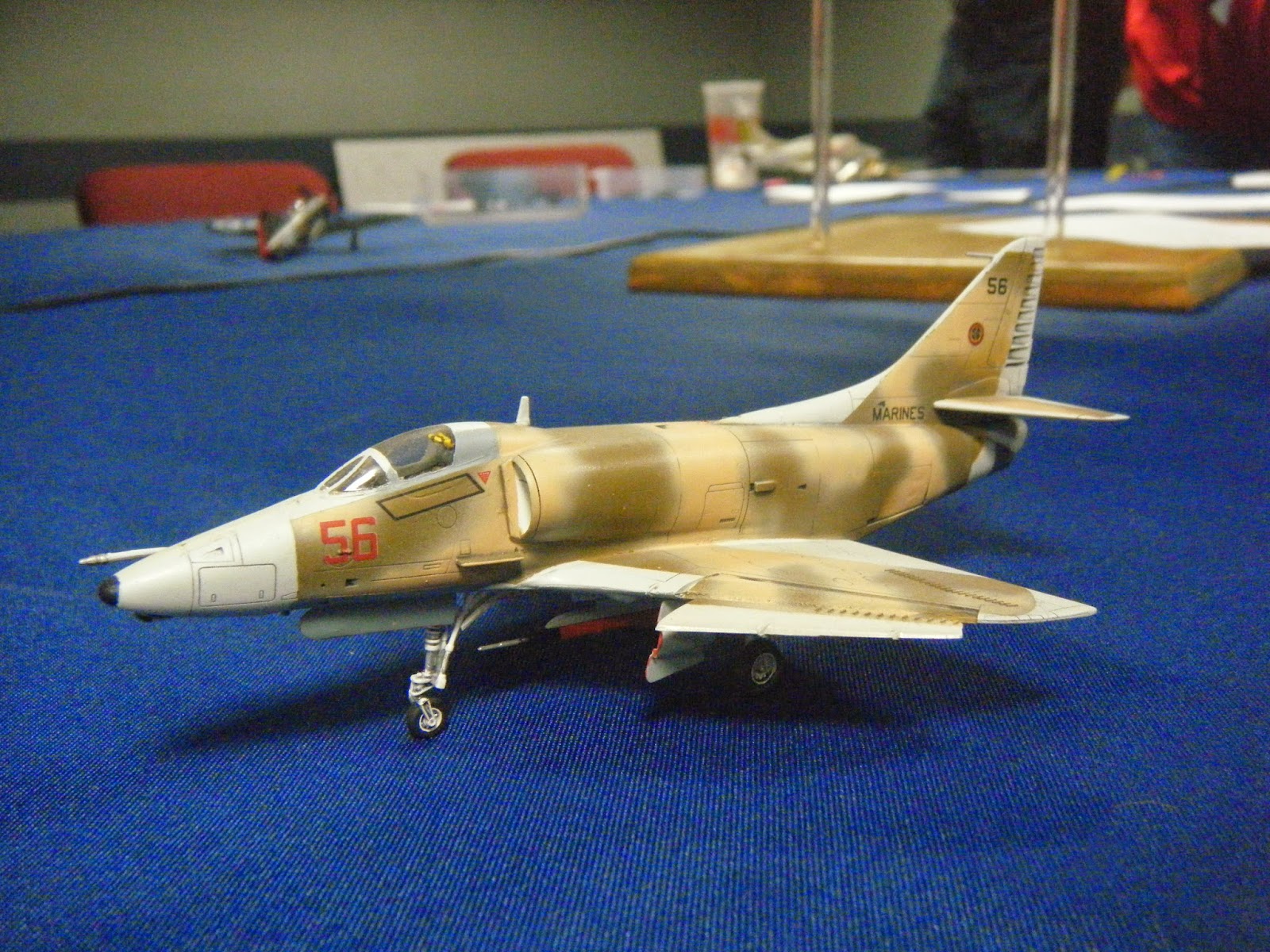 There were more Skyhawks on the table. Nick Kessel built the Fujimi 1/72 scale A-4E OOB as a Navy "Top Gun" bird. The camouflaged portion of the paint scheme is the silhouette of a MiG! A unique and unusual scheme well executed by Nick. 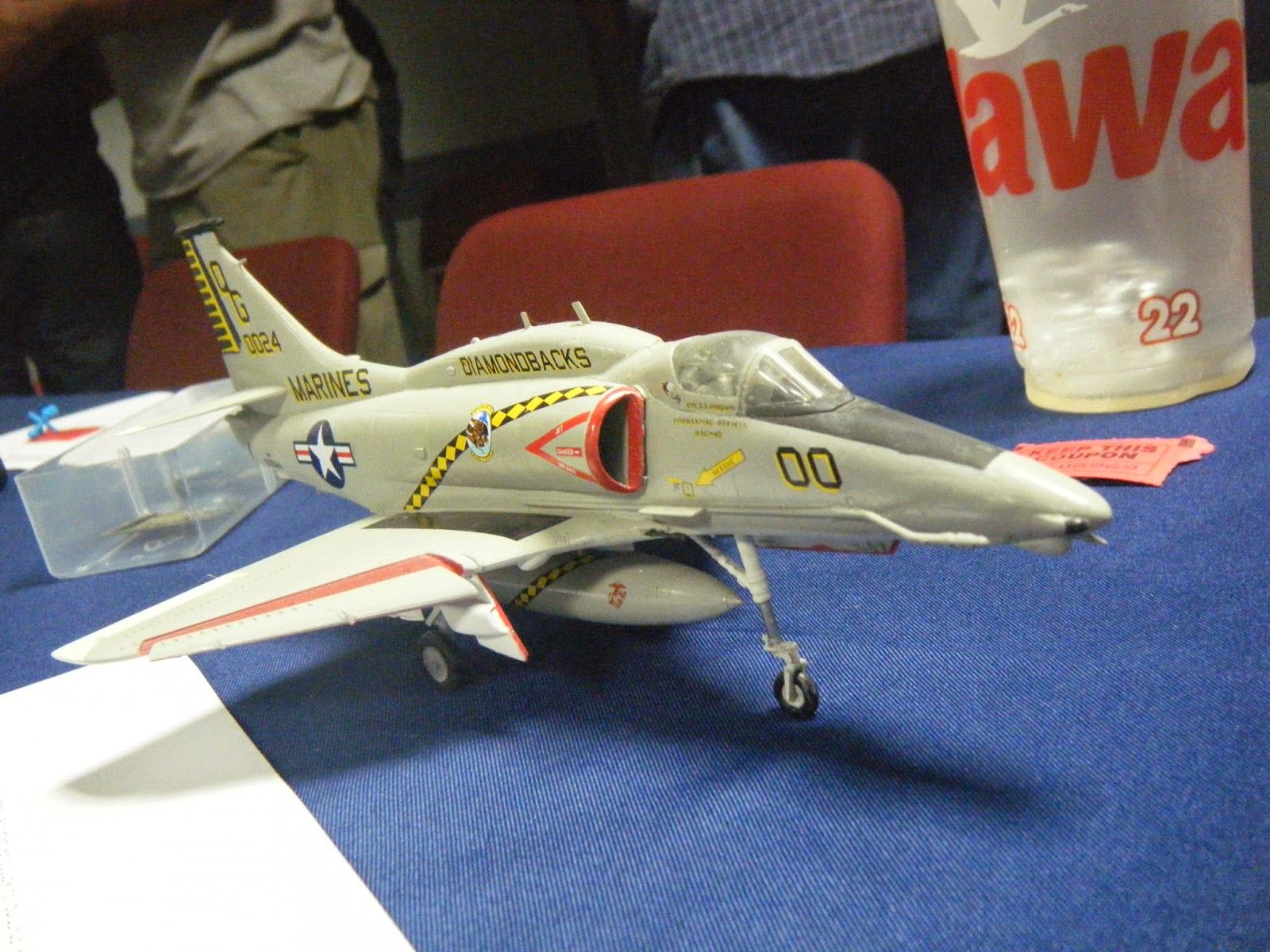 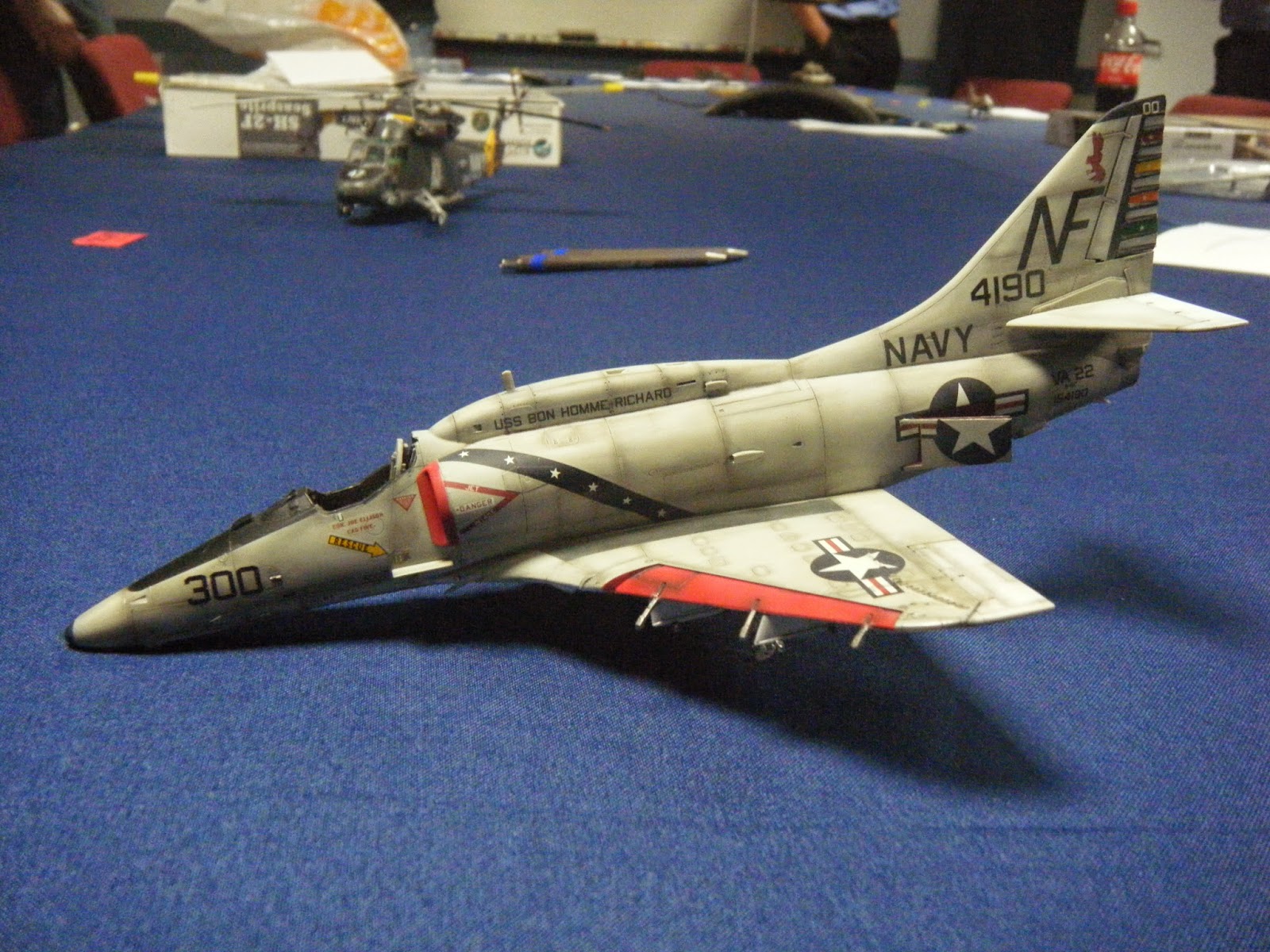 Andy Frill showed his in-work project, a Hasegawa 1/48 scale A-4E/F. Andy is building﻿ this Skyhawk as an A-4F of VA-22. The speed brakes have been enhanced with Eduard PE. The build is otherwise OOB, even using the kit decals. 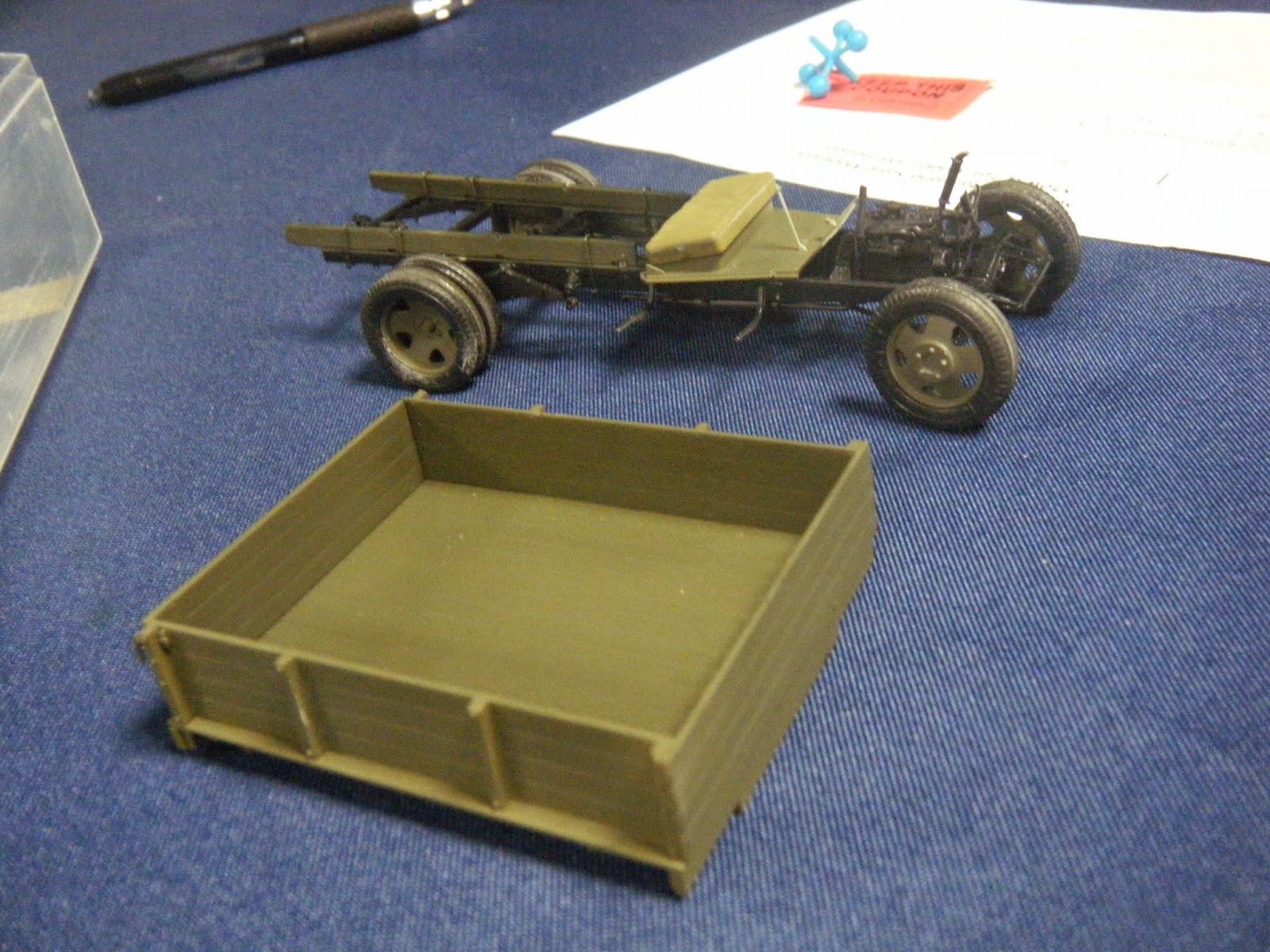 Doc Haugh showed his in-work 1943 GAZ-MM truck in 1/35 scale. Doc is building the Mini Art kit OOB and says it is highly detailed and a pleasure to build. 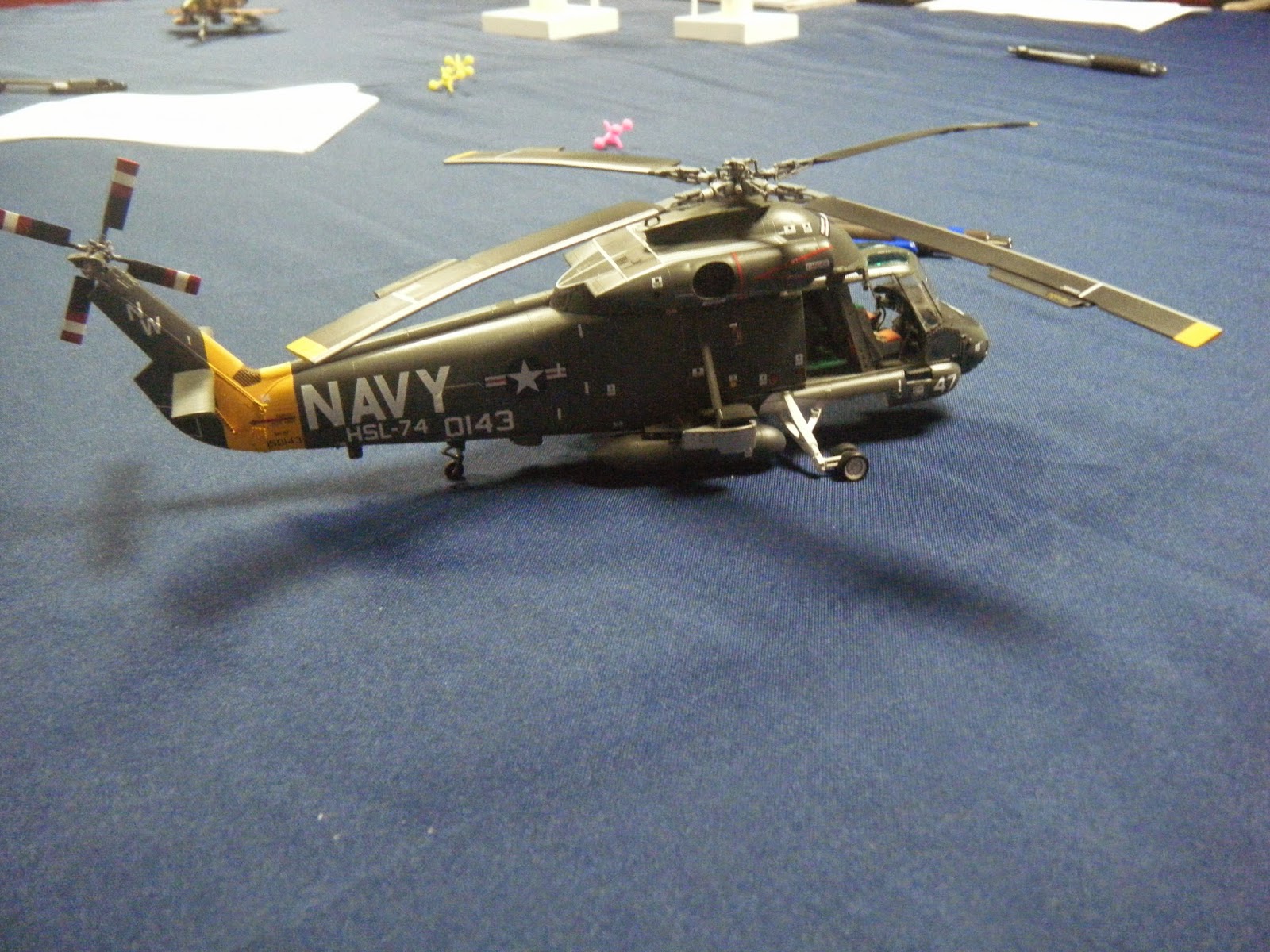 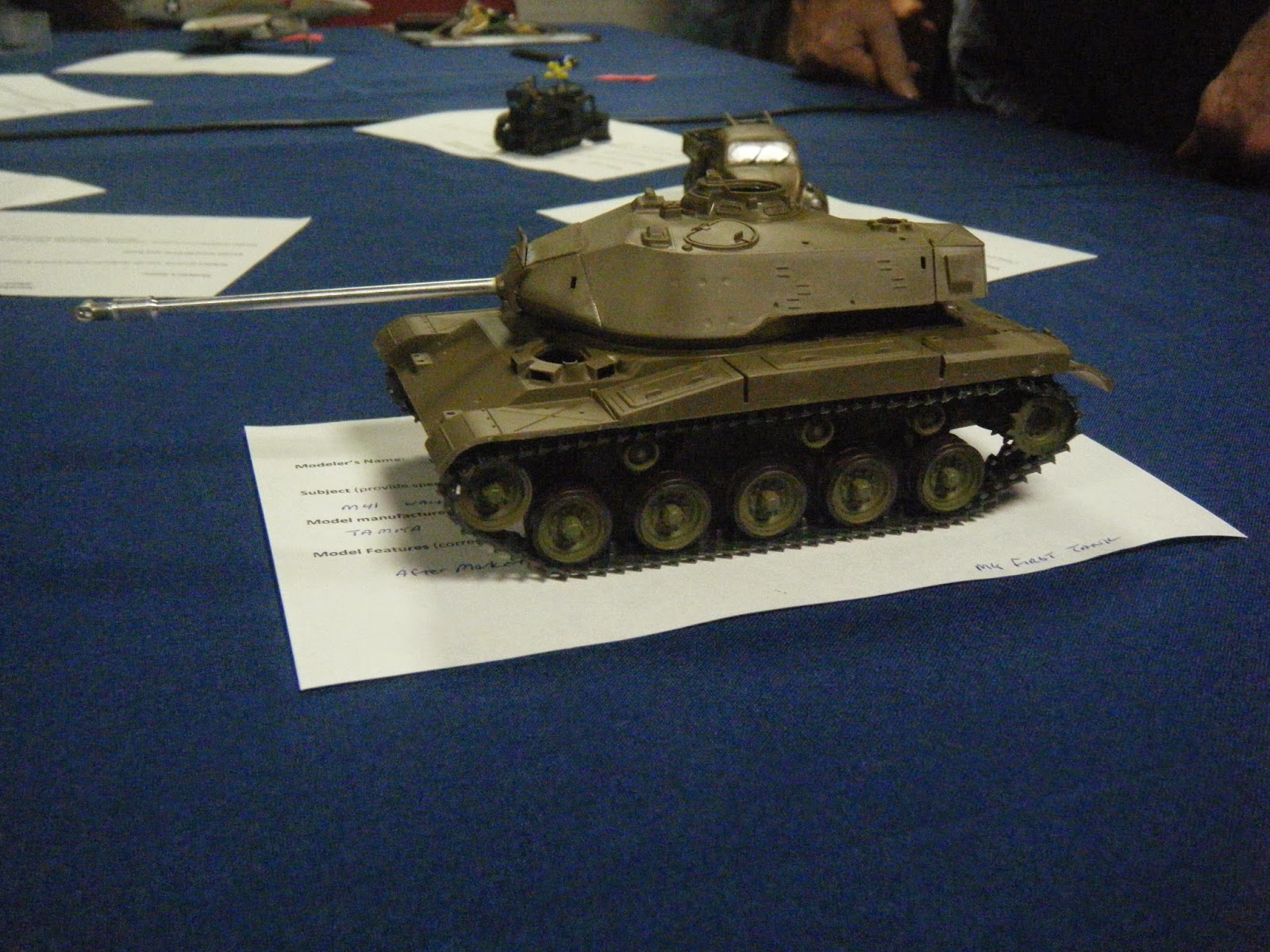 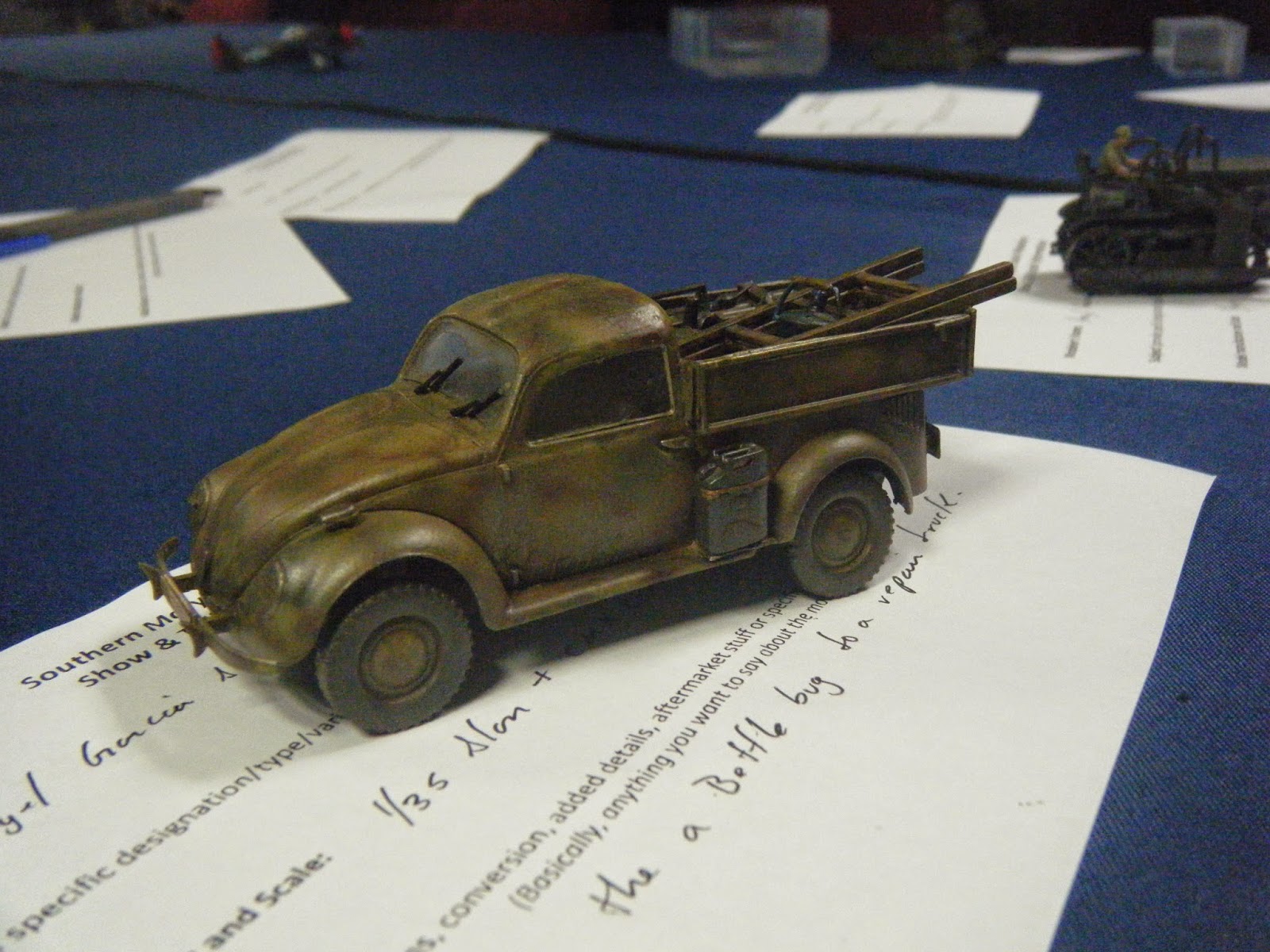 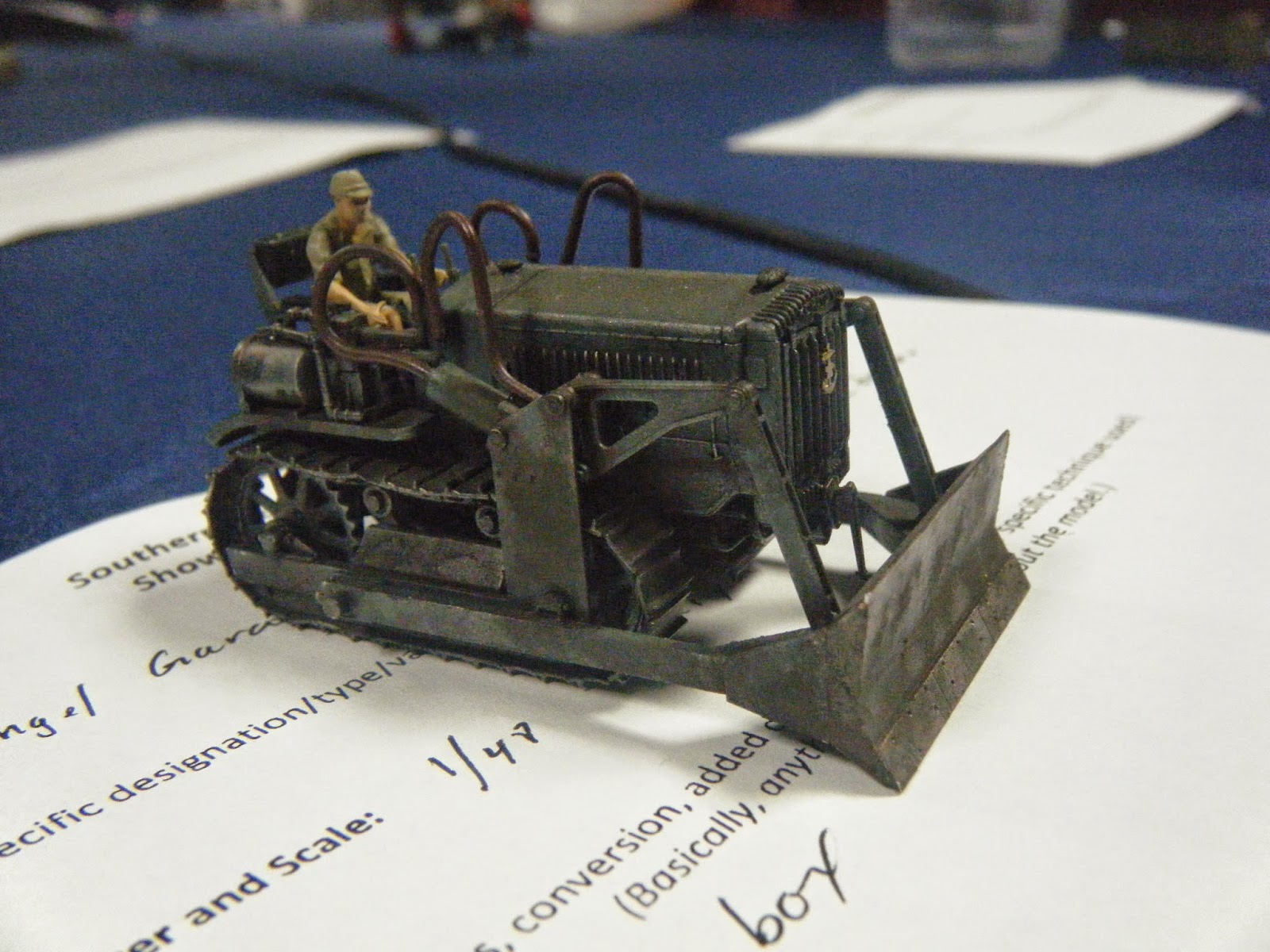 Entrepreneur Angel Garcia Ablanque had two projects on display. The top picture is a 1/35 scale Alan "Beetle" with the CMK repair truck conversion. Angel says the build reflects a late war German civilian who has gone into the truck repair business. The lower picture is of the Tamiya 1/48 scale Komatsu tractor built OOB.
﻿ 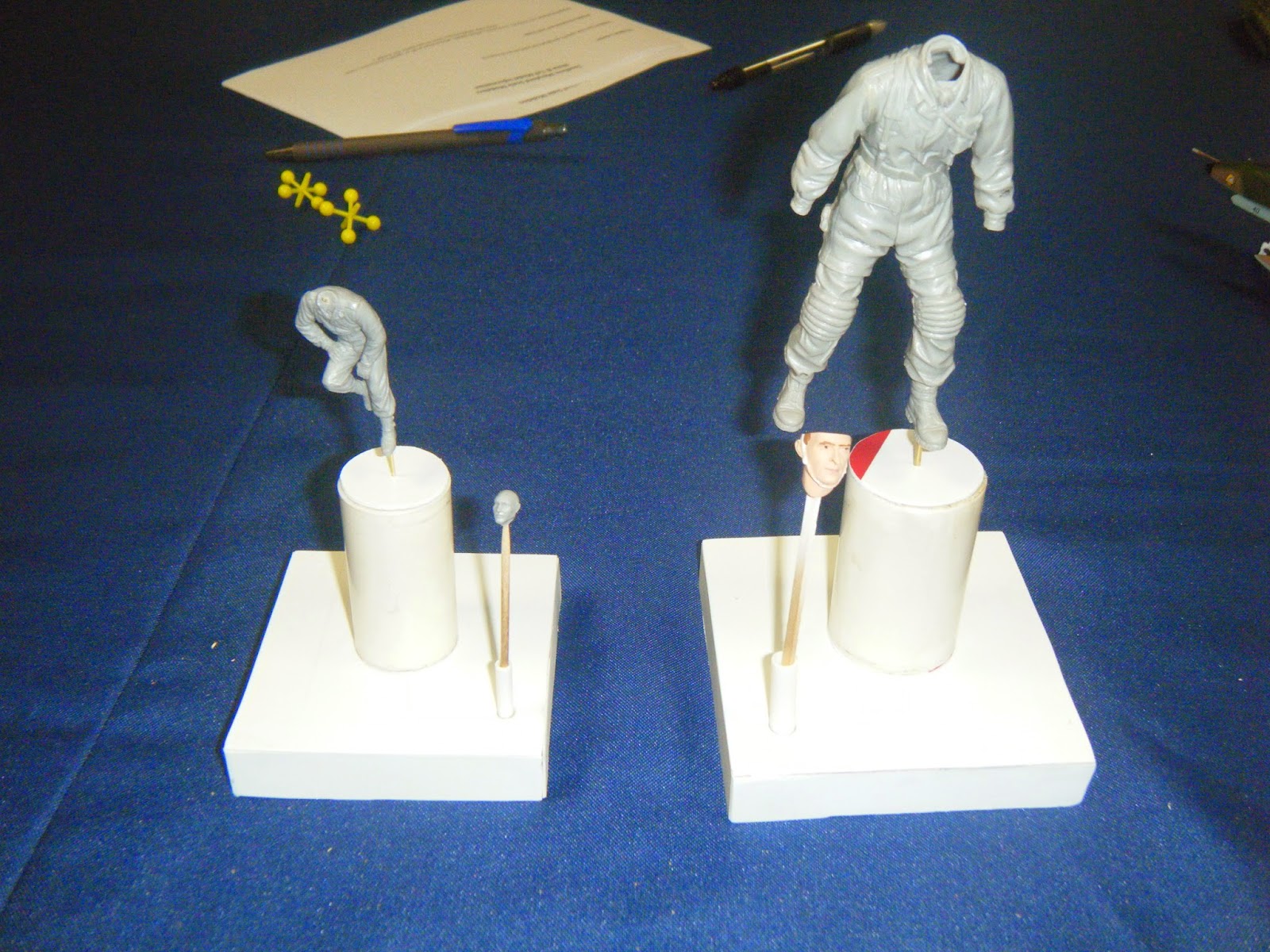 ﻿
Not a Halloween "Sleepy Hollow" diorama, just a couple in-work figures by Chuck Connor. The guy on the left is a 1/35 scale Mini Art US Army MP. He was included with a boxing of the Harley Davidson WLA US Army motorcycle. The fellow on the right is a Dragon Models 1/16 scale Fallschirmjaeger.

There were two models on display that I have descriptions for but, unfortunately, no picture.

Hope to see you all at the November meeting!
Posted by Unknown at 9:46 AM No comments: