At the March meeting everyone was talking about the Old Dominion Open, held in Richmond on February 28. Many SMSM members attended and our own Andy White, Andy Frill, and Scot Samo entered models in the contest. Between them they took home seven awards! Scot displayed some of his award winning work (below). 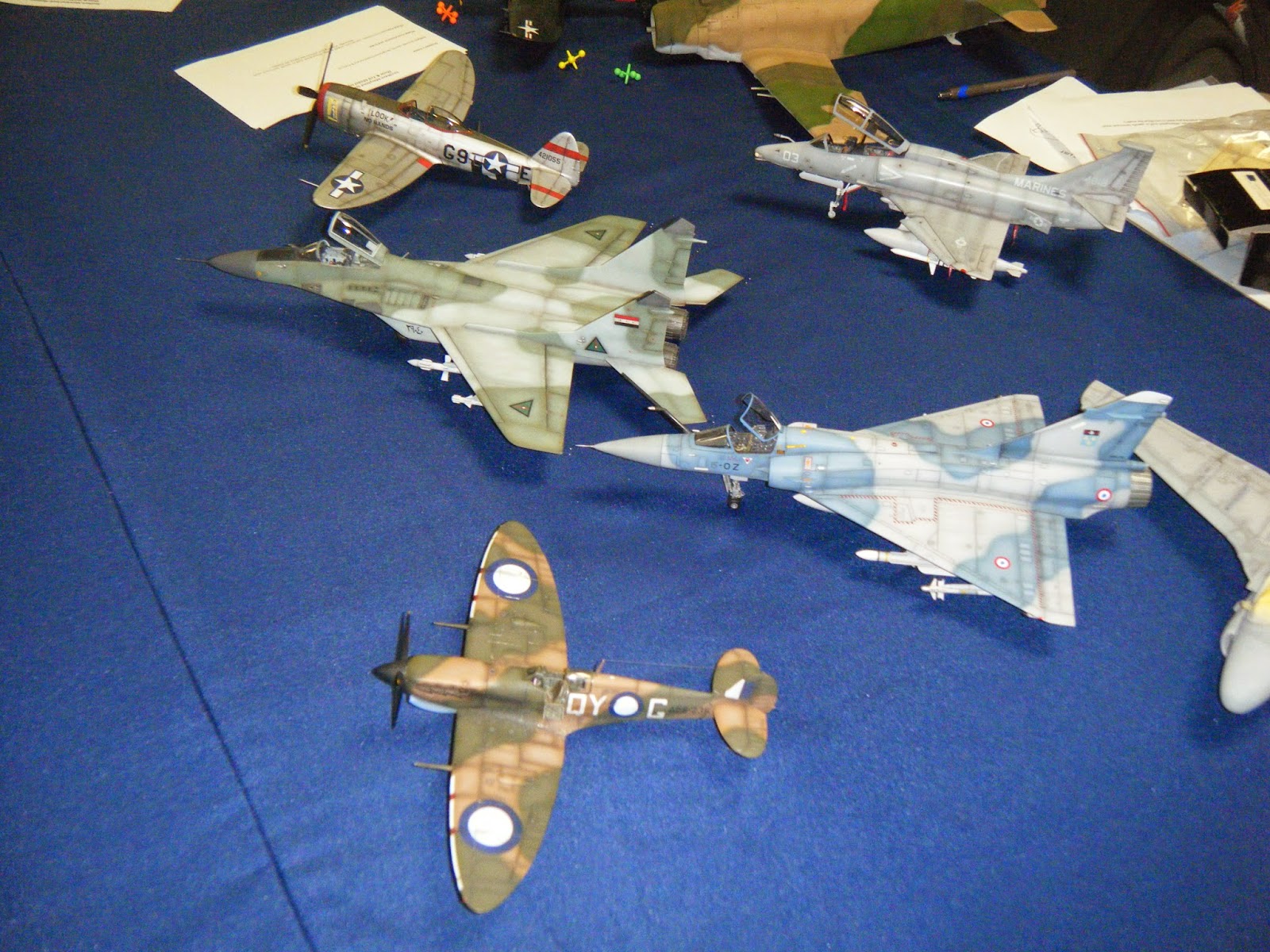 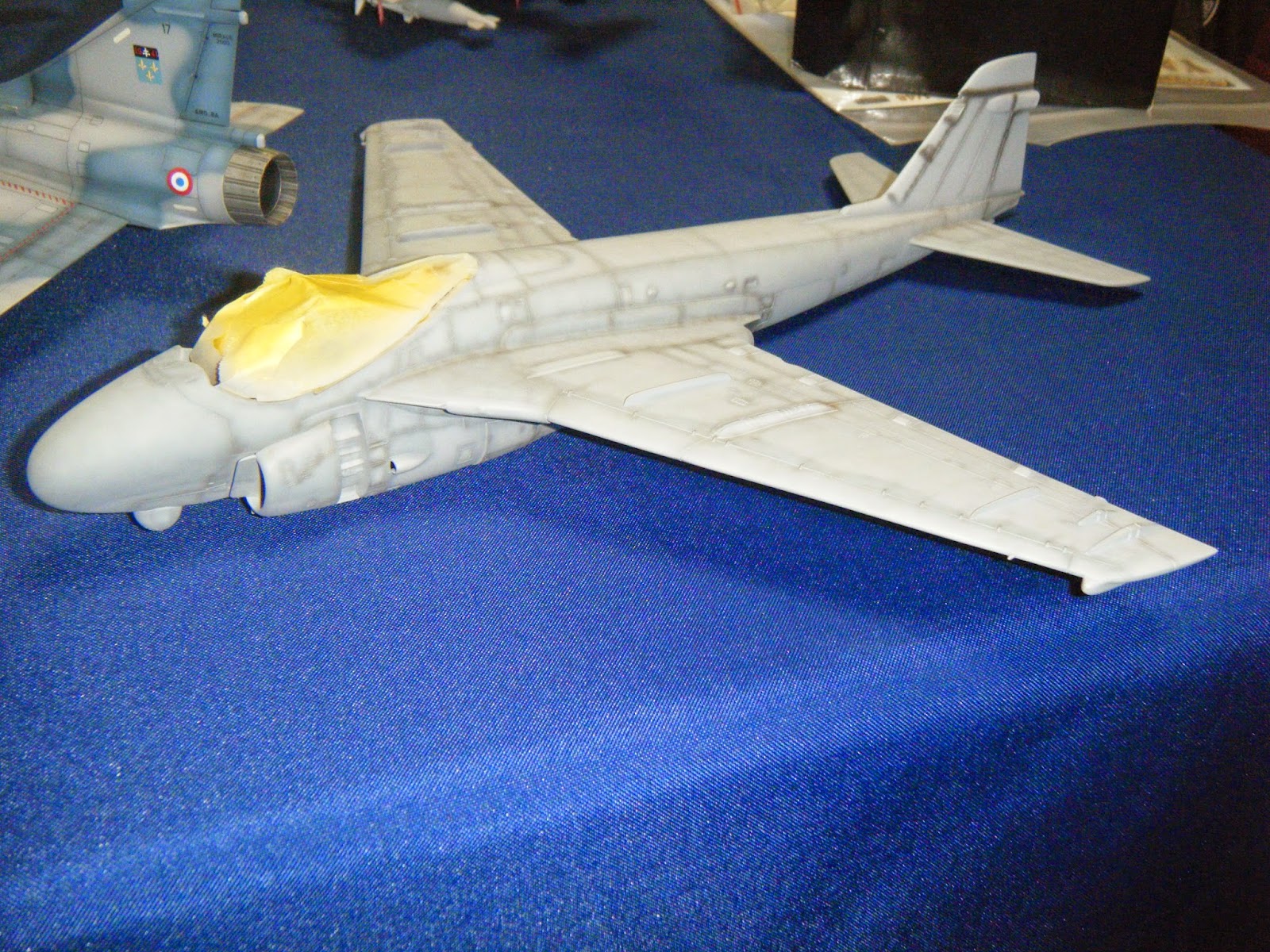 Scot also put this in-work 1/48 scale A-6E on display. Unfortunately I didn't get information sheets for any of these models, so that's all I can tell you about them. 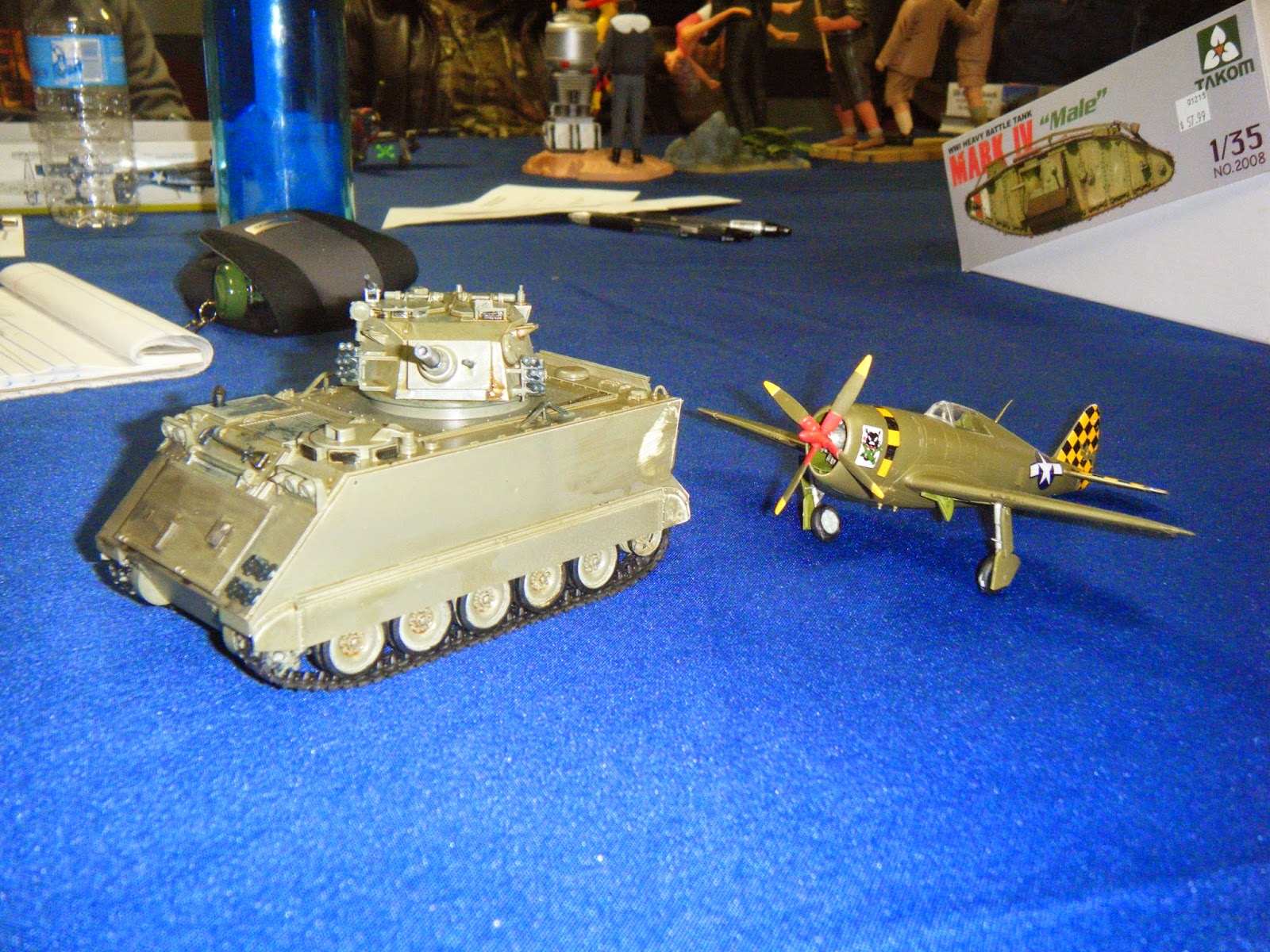 New guy Justin Reed brought these two in-work OOB projects. On the left is a 1/35 scale Tamiya M113A1 and on the right is a 1/72 scale Academy P-47D Thunderbolt. Justin experienced some decal and paint issues on these, but the ever helpful SMSM membership came to his recue with all the advice and moral support he could handle. Keep on building, Justin! 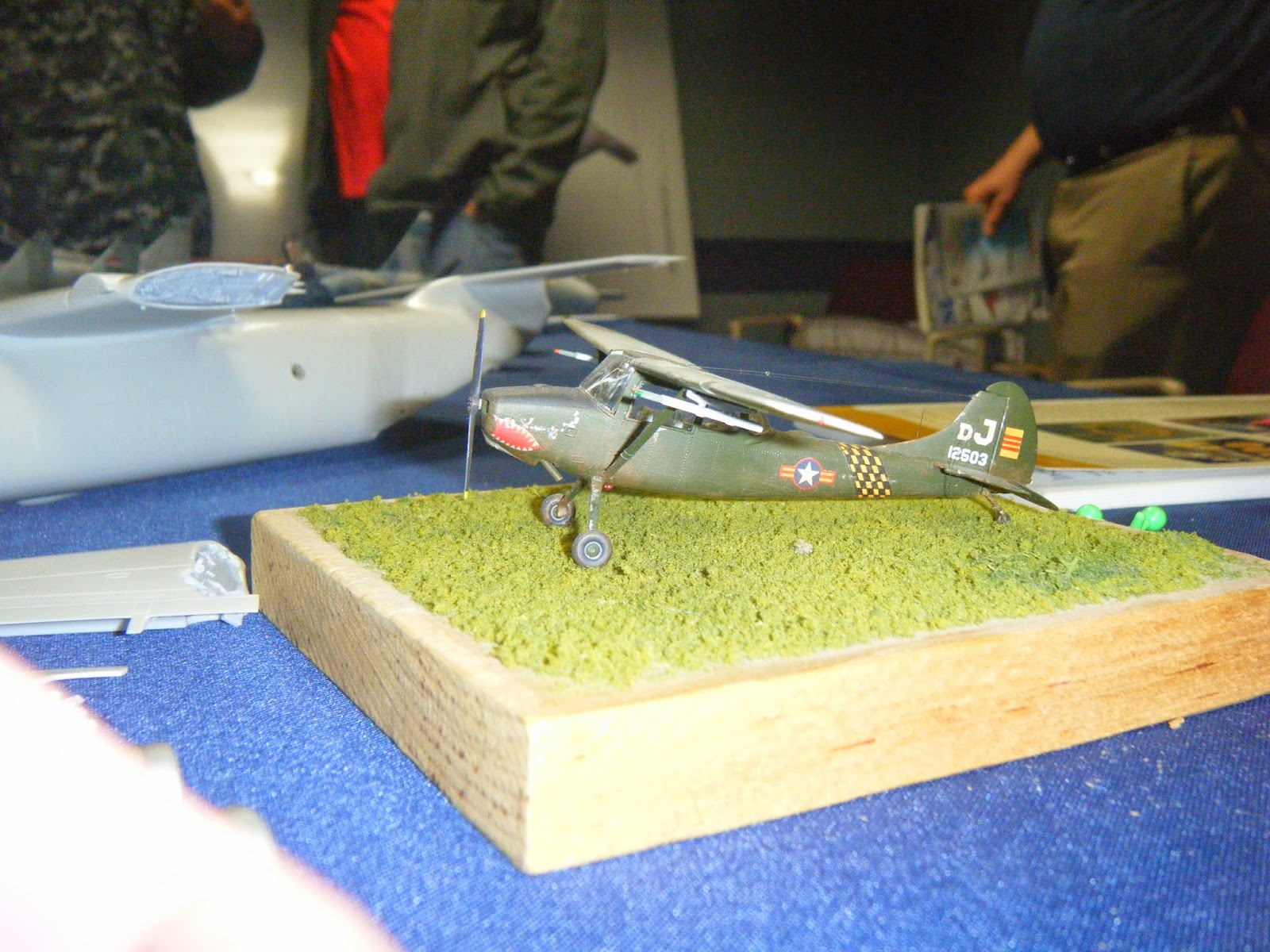 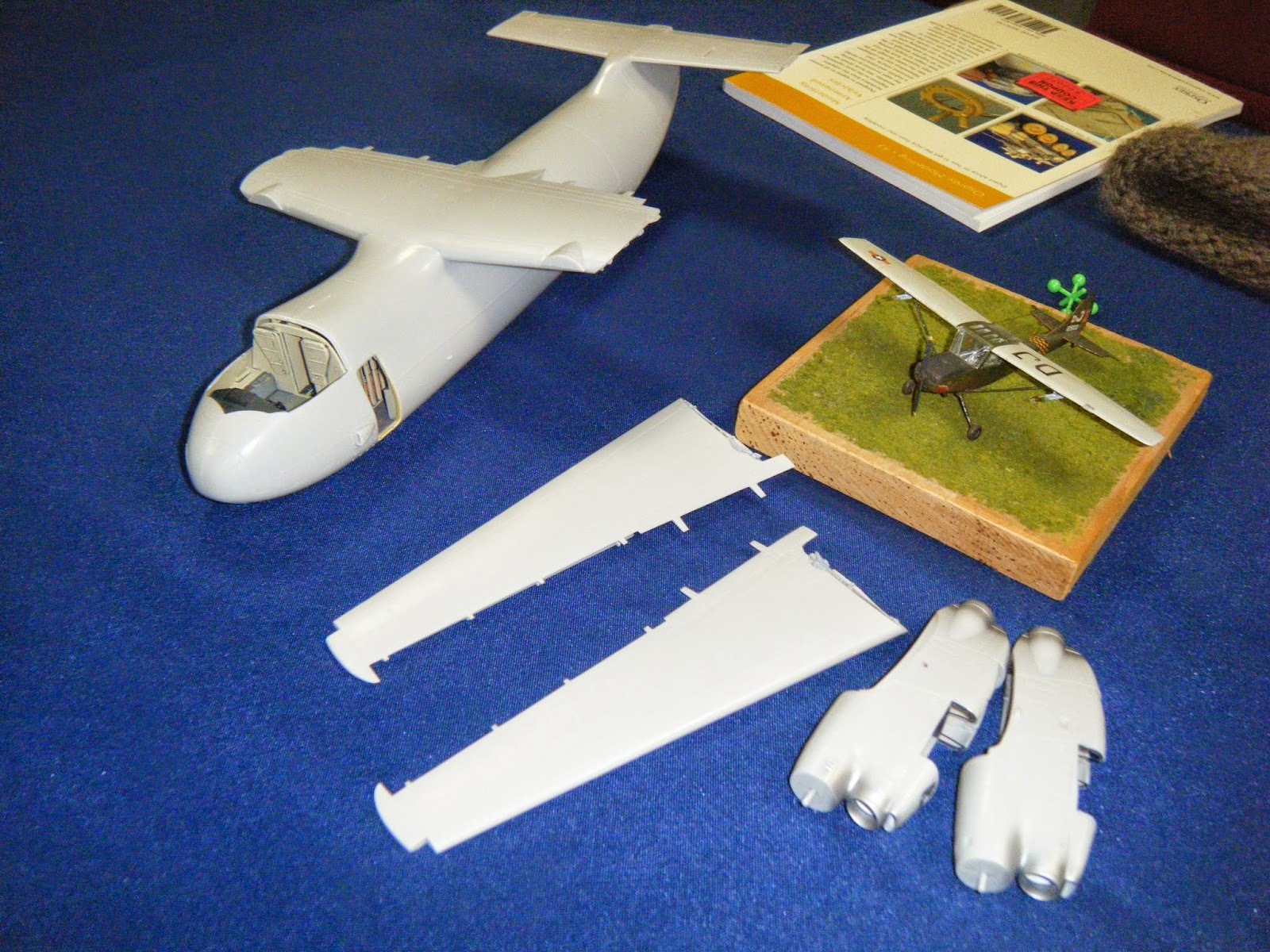 Andy also showed this in-work project. I seem to recall that it is a 1/48 scale Kinetic C-2 Greyhound. Since no info sheet was filled out and my short term memory is buried deep beneath the sands of time, it's hard to say for sure. 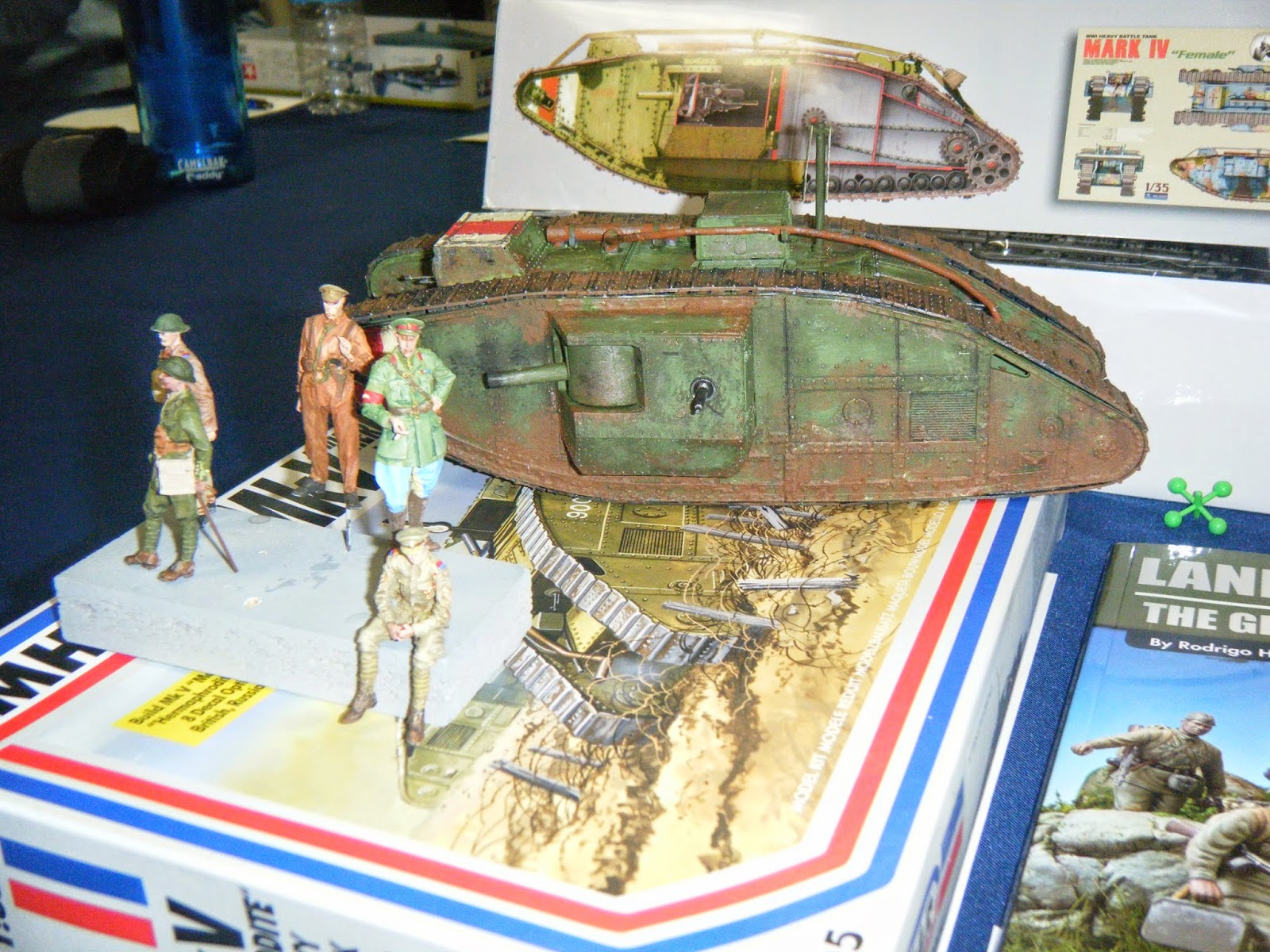 John Bray displayed some pieces which will be used in another of his incredible dioramas. It's a WW I tank and figures. Again, no info sheet filled out. 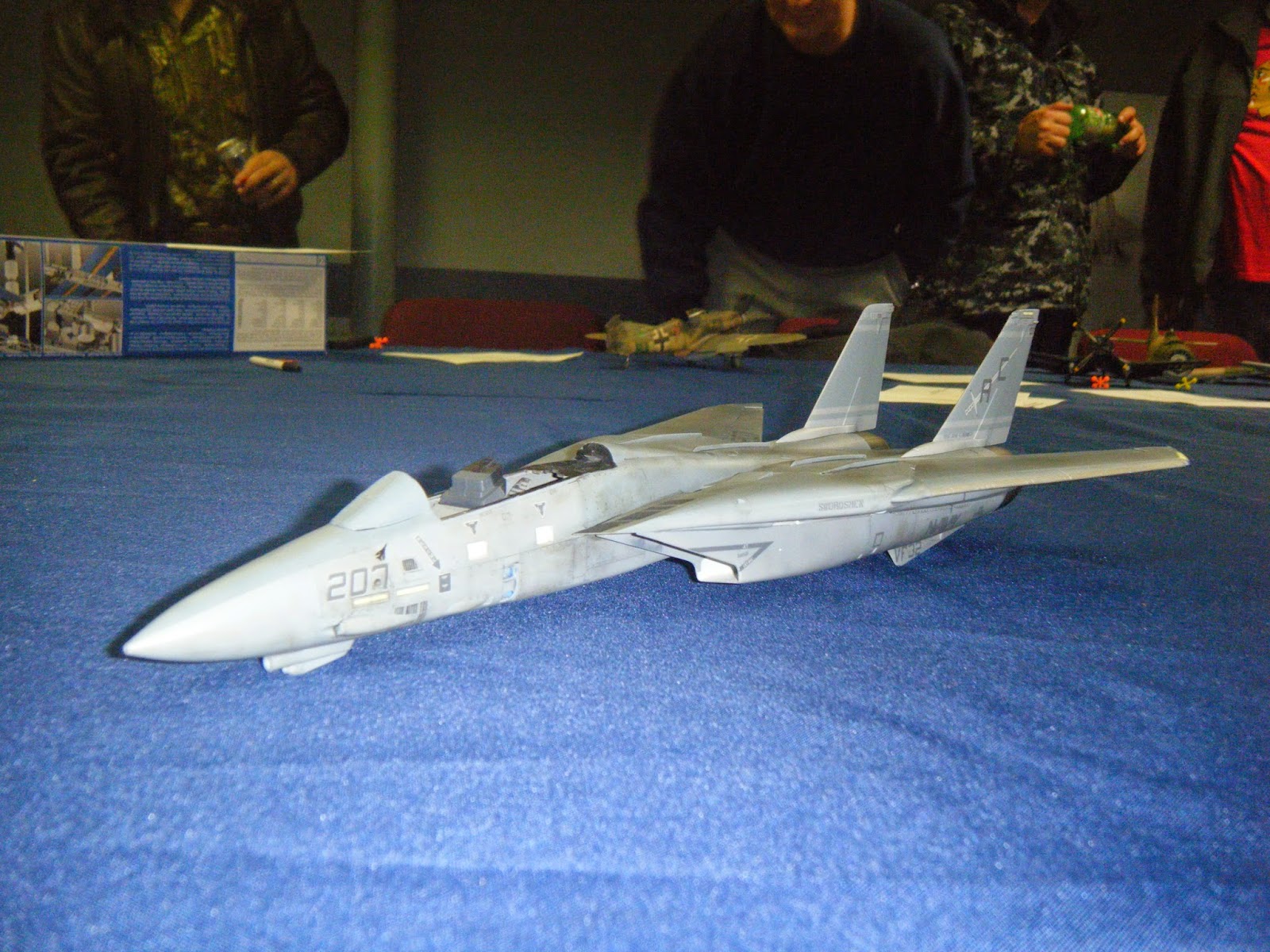 Nick Kessel DID fill out an info sheet for his project. Thanks so much, Nick! The 1/48 Hasegawa F-14A will sport VF-32 markings from Fightertown decals. Nick's goal for this in-work project is "...to finish before 2016". It's good to have goals! 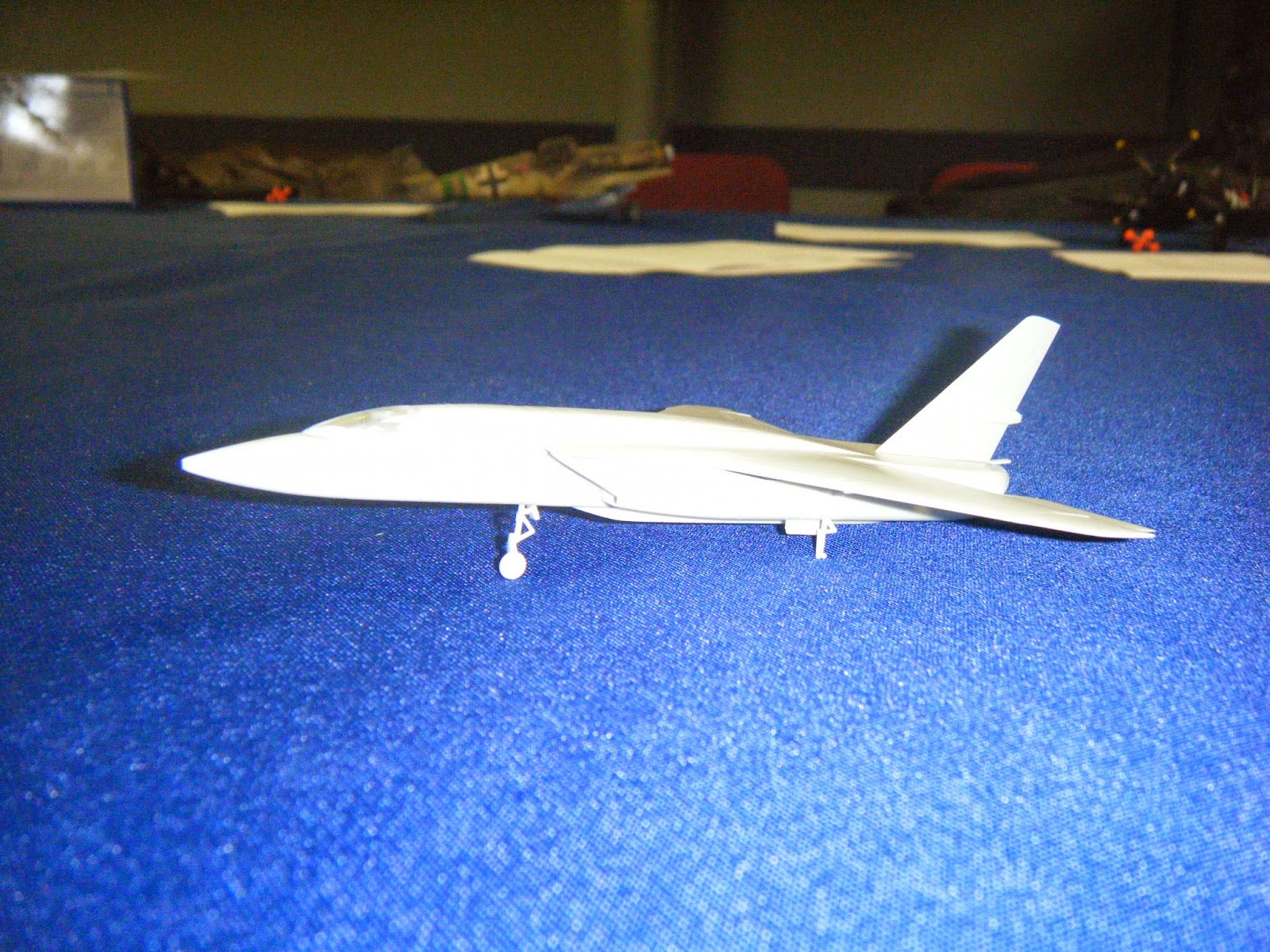 Steve Workman showed this 1/144 scale Arii RA-5C Vigilante, an in-work project. Steve corrected the shapes of the intakes to reflect the 2nd production aircraft configuration. He also added a scratch built ECM sensor to the tail and a scratch built landing gear door to replace a missing part. The Vigie will carry the markings of RVAH-5 as flown from the deck of the USS Enterprise in 1971. 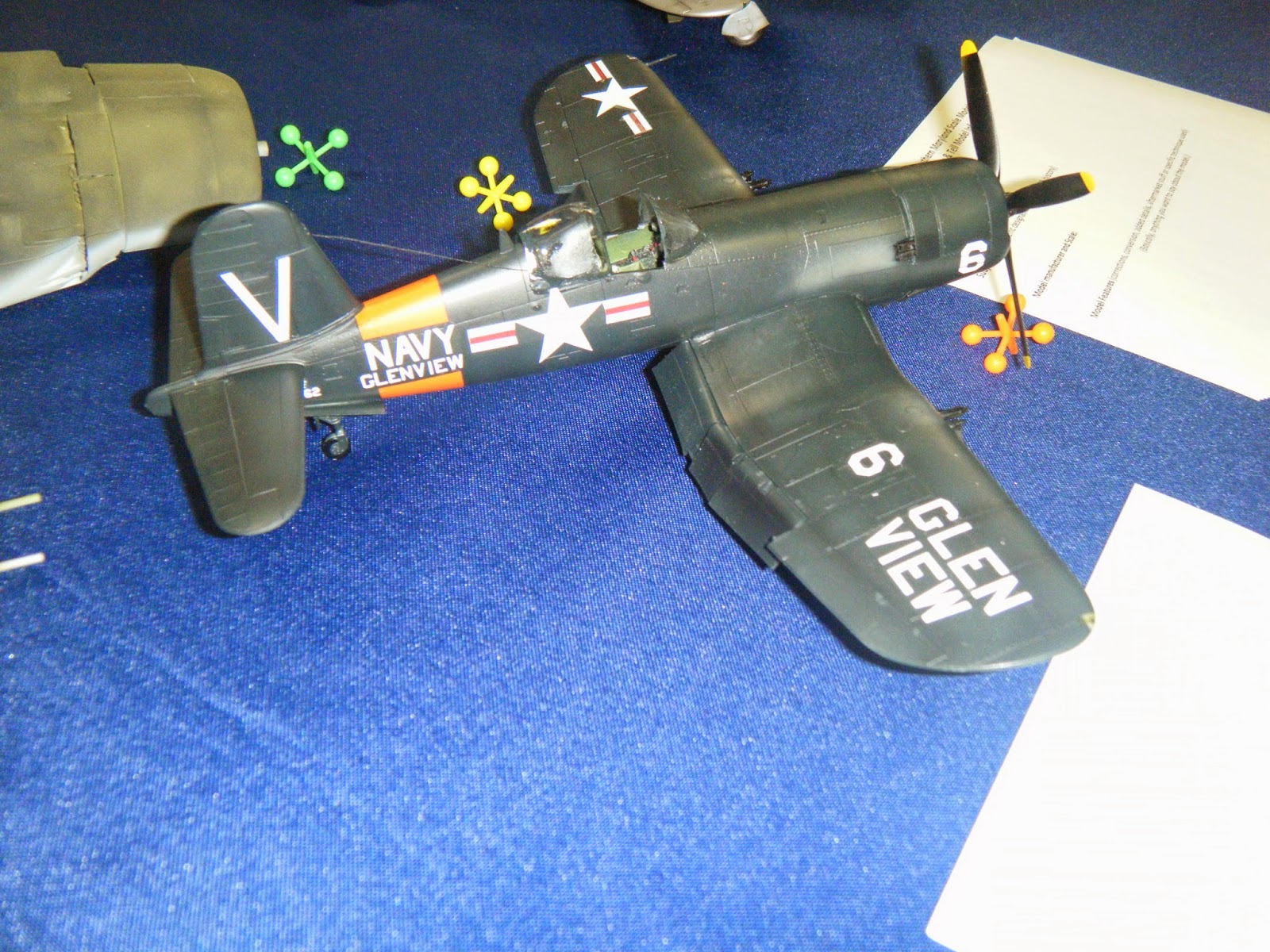 Brent Leidig ﻿Brought two models to the table. This 1/48 Pro Modeler (originally Hasegawa) F4U-5 shows the markings of a Navy Reserve bird flown from Glenview. Brent enhanced the build with a Wolfpack cockpit. 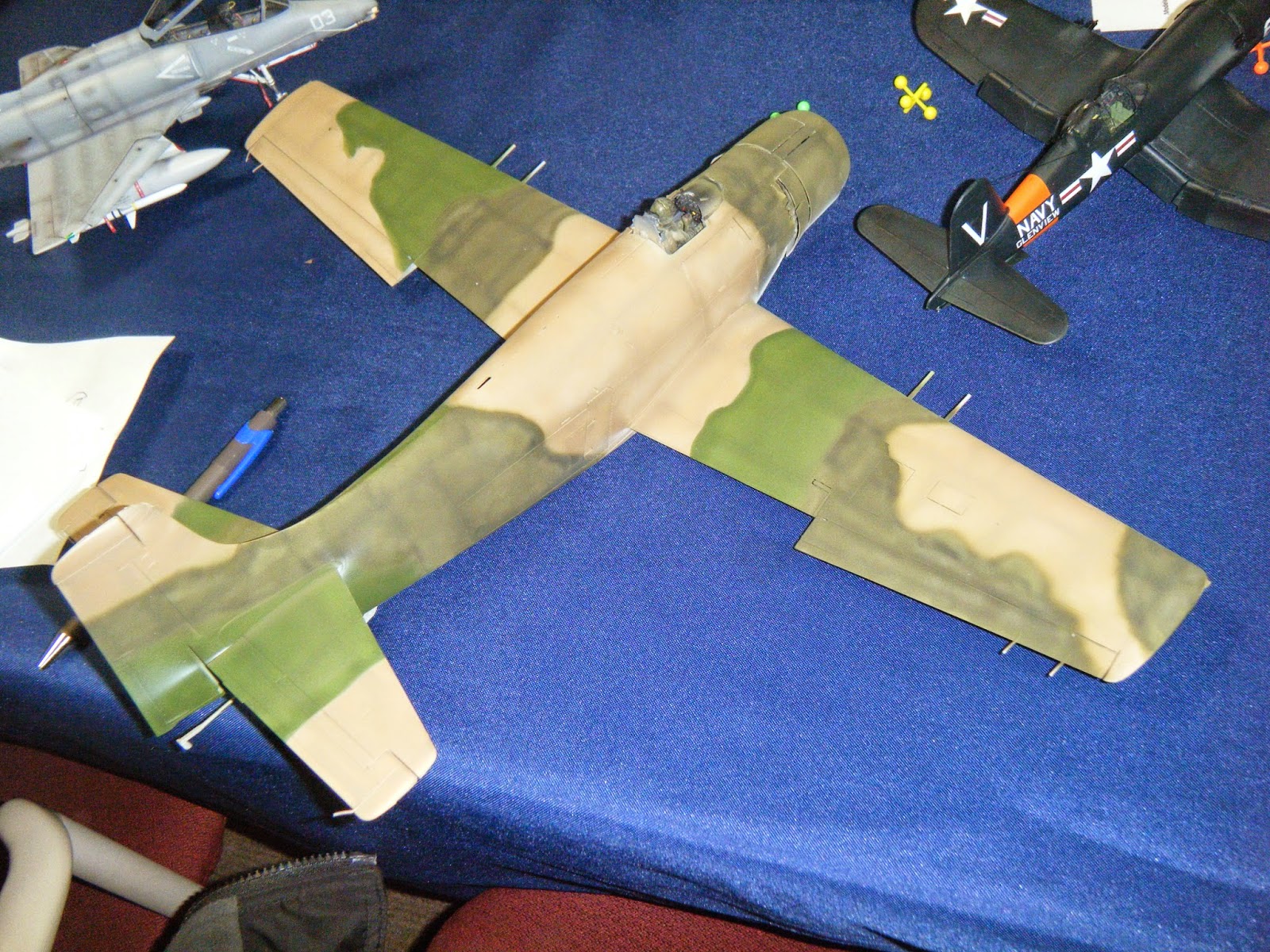 Brent also showed this in-work project. The 1/32 Zoukei-Mura A-1 Skyraider provides a BIG canvas for Brent to practice his painting skills! 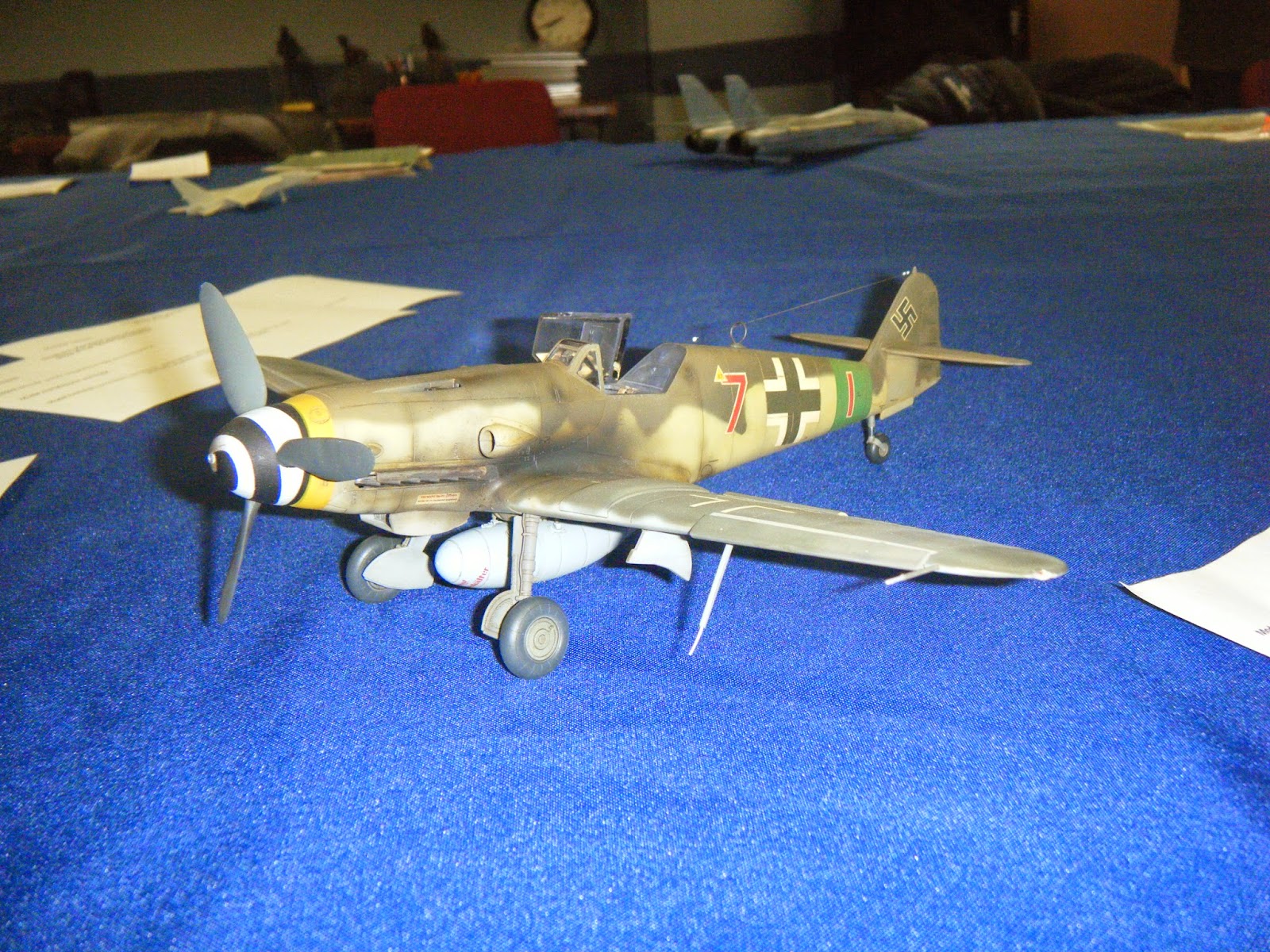 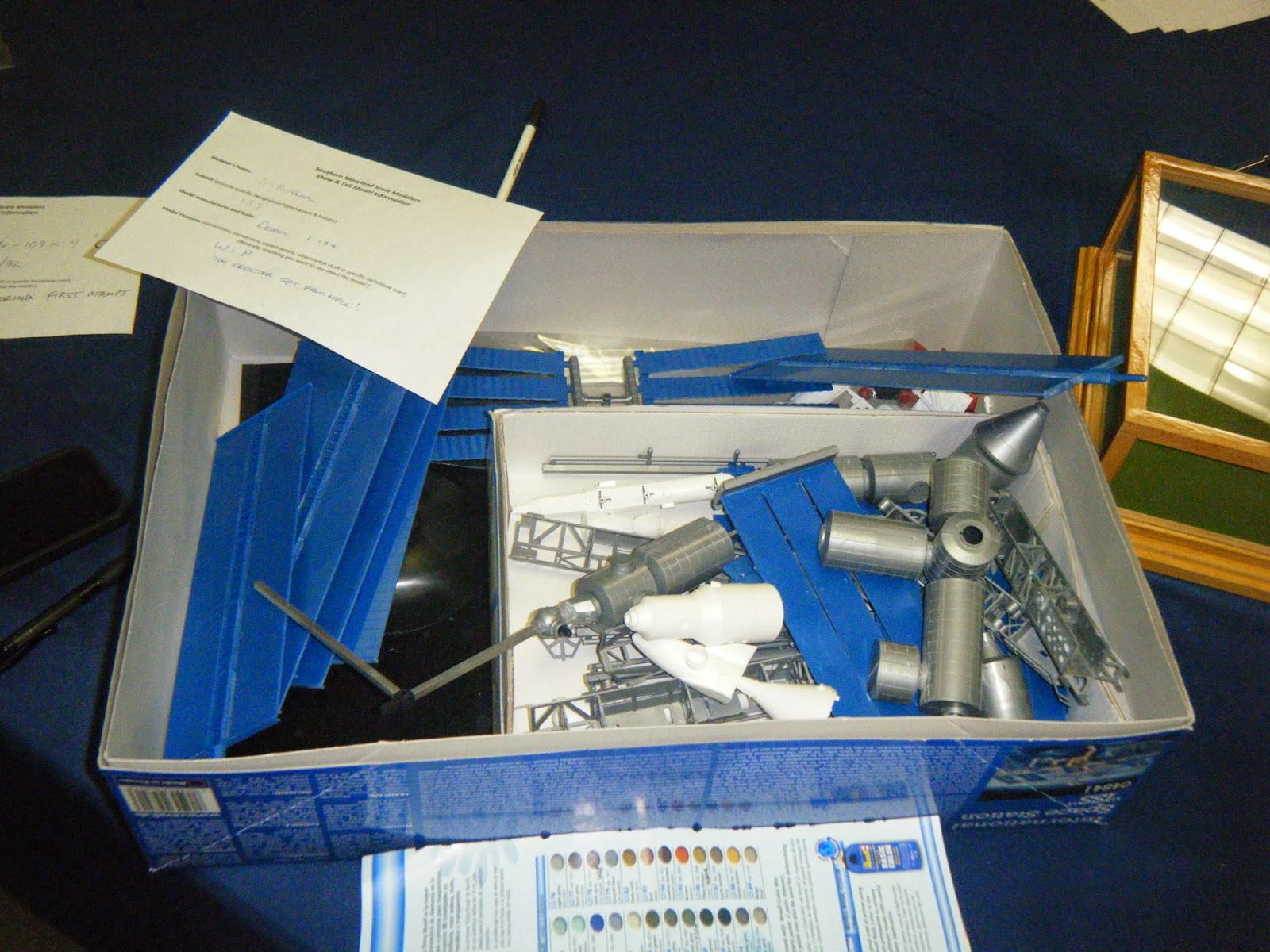 Yes, there is a model in there! Jim Rotramel is building the 1/144 Revell International Space Station. He characterized the kit as "the erector set from hell". I commented to Jim that the inside of the box looks like the top of my workbench! Mike Colvin displayed a trio of figure models. First, the 1/9 Mobius Creature From the Black Lagoon. Built OOB, the victim's blouse is a decal. Mike scanned a paisley scarf, then resized the image and printed in on a decal sheet. Very clever! 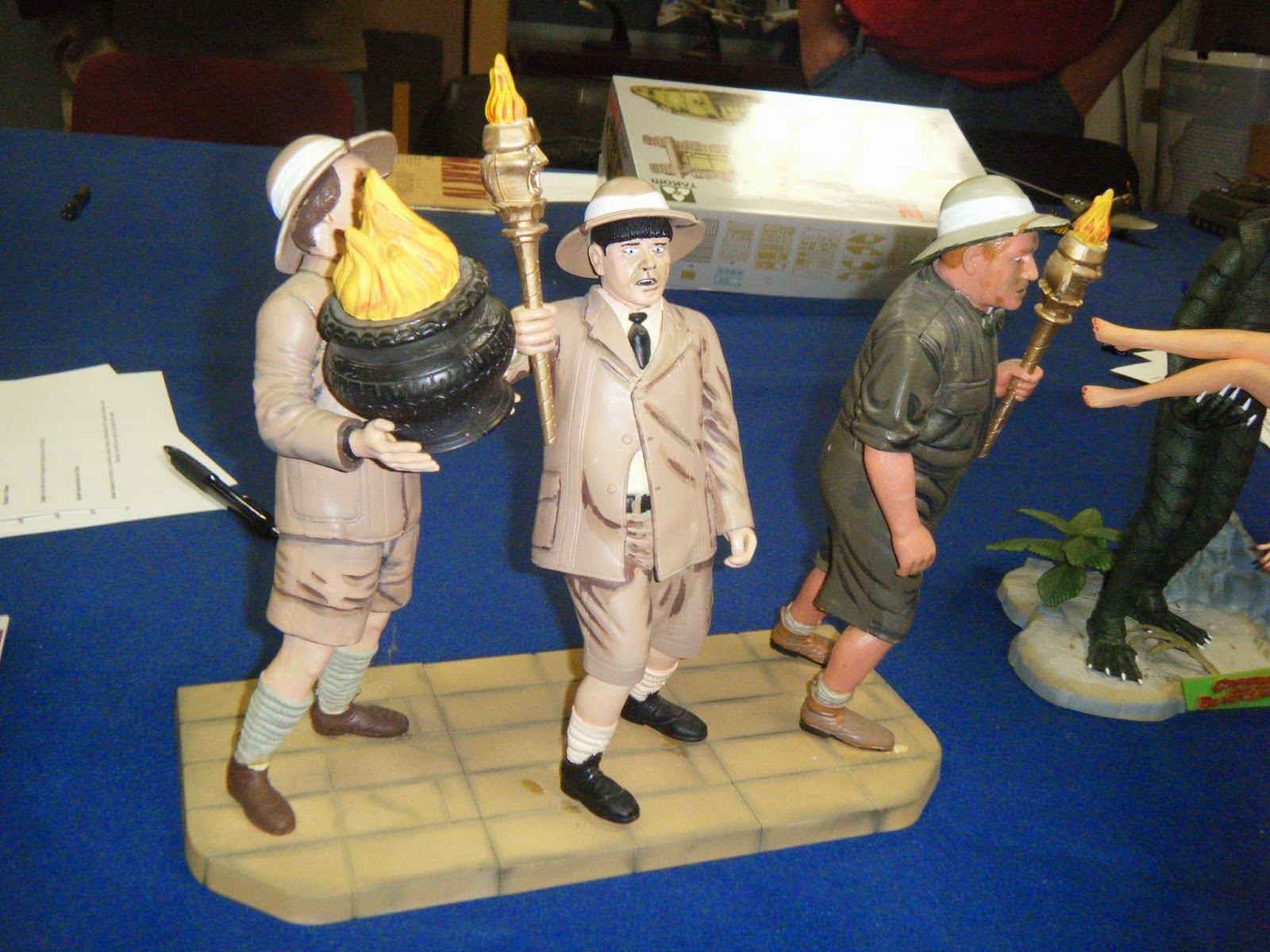 Next we have the 1/9 Polar Lights 3 Stooges from the movie "I Want my Mummy", also built OOB. 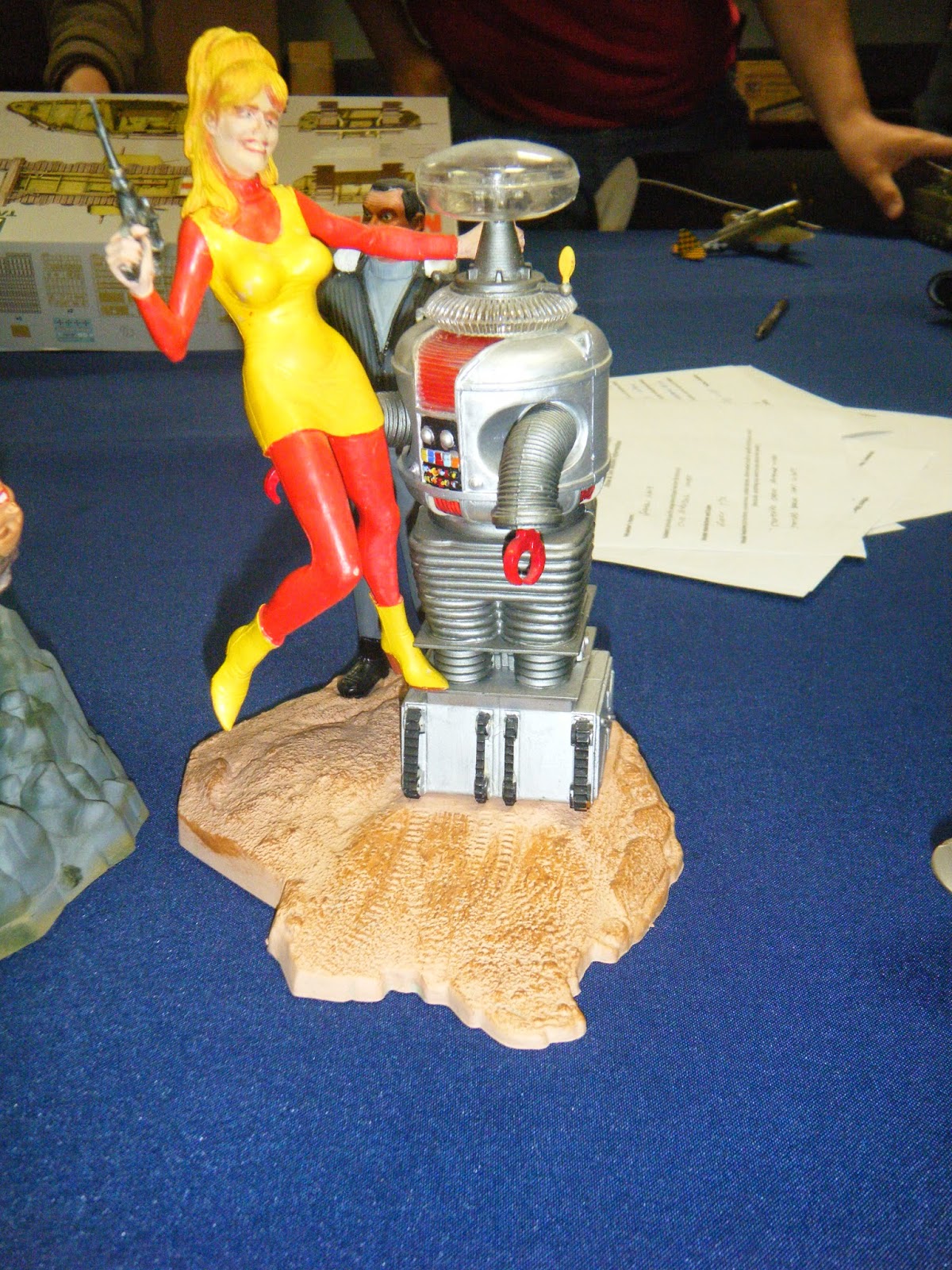 No info sheet on this one but it is the third of Mike's figures, the robot from the "Lost in Space" TV series. 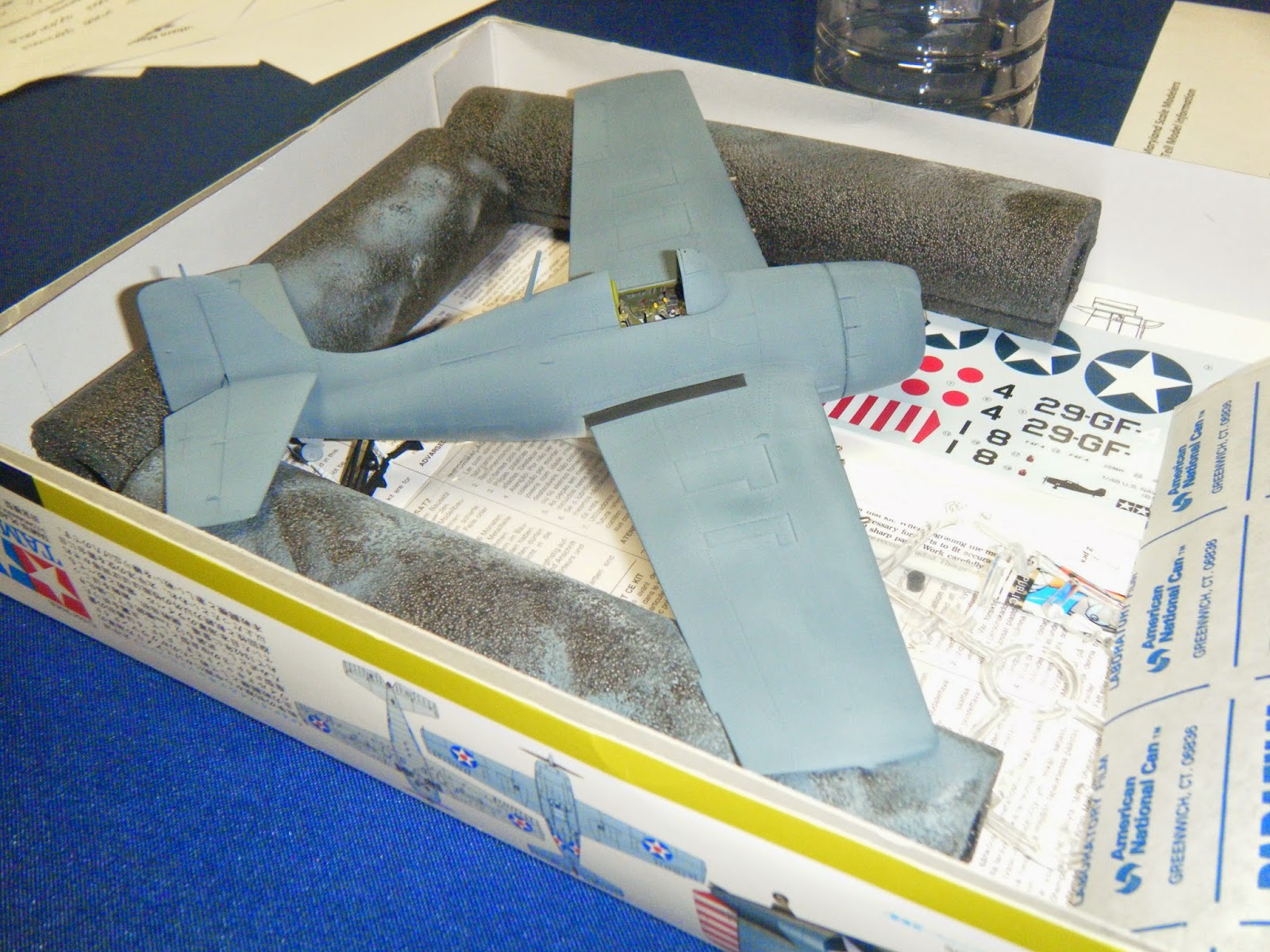 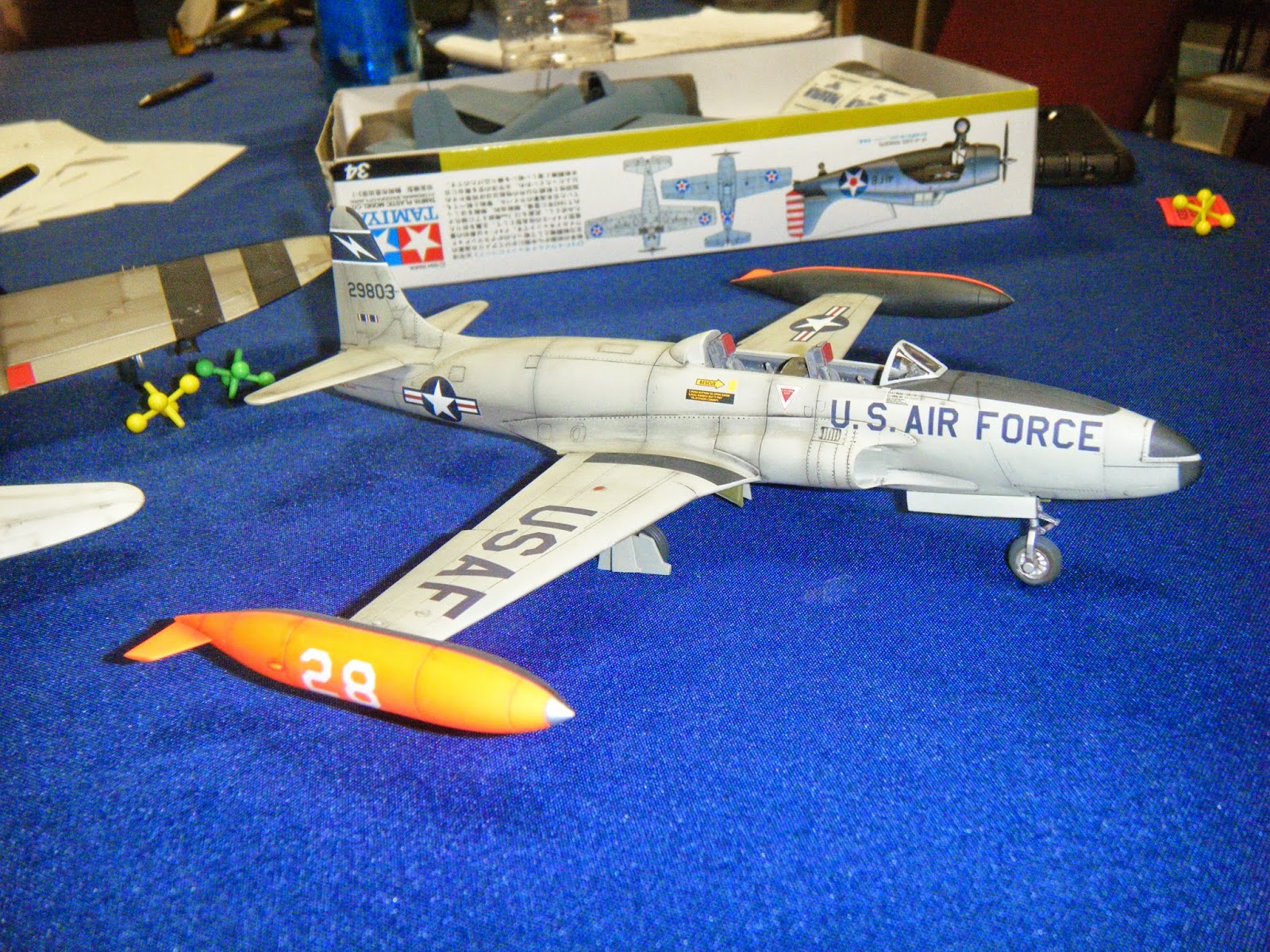 No info sheets on these last two models, but I'm pretty sure they were built by Andy Frill. Now you know everything I know. Scary, ain't it?
Posted by Unknown at 4:11 PM No comments: