The theme of the July meeting was "Setting Sun"; Any subject related to the final year of combat operations in the PTO, September 1944 to September 1945. 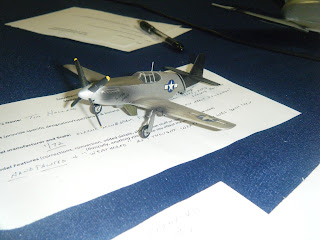 First up is Tim Holland's theme model, the P-51C "Little Jeep" flown by Capt Forest Parham of the 75 FS, 13 FG at Luliang in November, 1944. This is the "Classic" 1/72 scale Monogram P-51B kit which Tim Built about 35 years ago! I think that makes it more antique than classic. Tim hand painted the Mustang and weathered it in a way he deemed appropriate at the time. 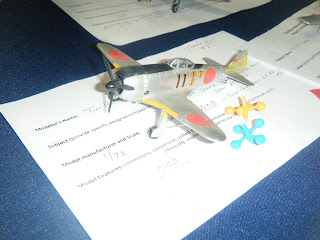 Tim had a second theme model, this Ki-44 Shoki. The plane wears the markings of Capt Yoshio Yoshida of the 70th Sentai in Japan, April , 1945. The 1/72 scale Hasegawa kit was built OOB 20 - 25 years ago. Less of an antique than the Mustang. 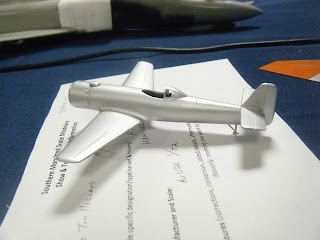 Tim's third theme subject was this more recent, still in work project. The Ki-115 Tsurugi was a type flown by Kamikaze units during the summer of 1945. The 1/72 scale kit is from Av Usk. 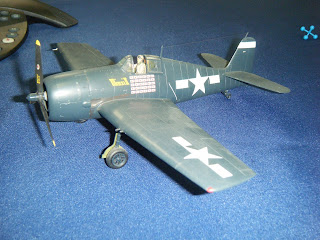 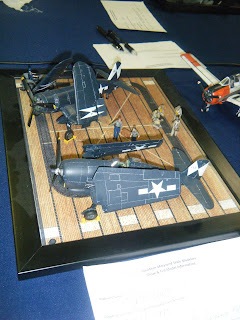 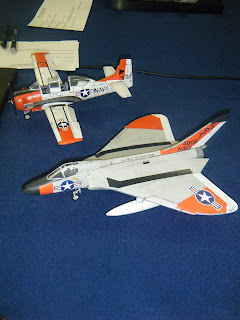 ﻿
At the top of this picture is Brent's non-theme project, the 1/48 Roden T-28 Trojan. The US Navy TPS markings are from Xtradecal. Brent added an Aries interior, Quick Boost cowl flaps and speed brakes, Royal Resin Wheels, and SAC metal landing gear.
Unfortunately, I have no info for the Skyray. 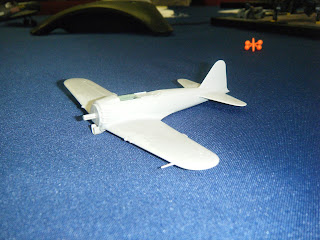 Above is Steve Workman's in-work theme entry, a 1/72 scale A6M5C "Zero" from Hobby Boss. Steve replaced much of the cockpit with parts from a Hasegawa kit and also plans to use a Hasegawa head rest. Steve scratch built the side wall details and added photo etched seat belts. He cut off the molded on gun barrels and will replace them with metal parts. 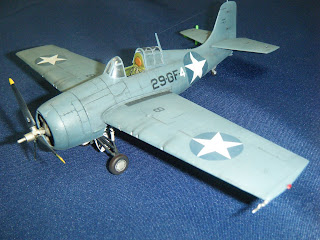 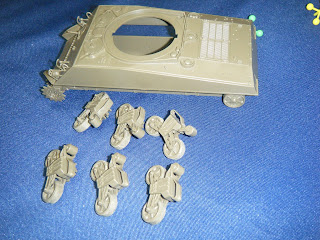 Darrin's in-work project is the 1/35 Tamiya Sherman M4A3. He plans to build his first AFV project OOB with the exception of adding T-48 tracks from AFV Club. 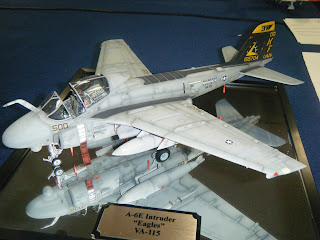 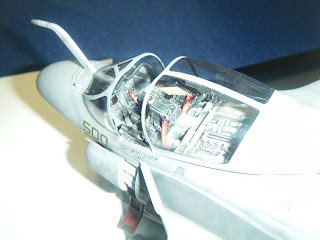 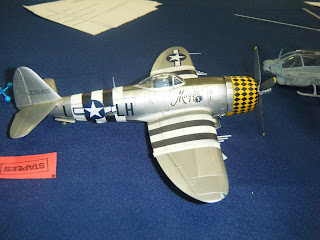 Colin Tatusko ﻿brought a couple of projects. Above is the 1/48 scale P-47 bubbletop from Tamiya. The kit gets Colin's "Just awesome" endorsement. He used Alclad paints and AK Metalizer pastes to achieve the natural metal finish. 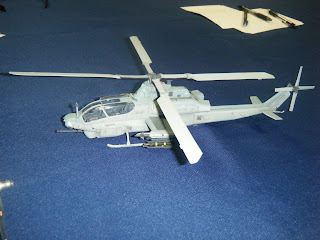 Colin also showed this AH-1Z Cobra. He built the 1/48 Kitty Hawk kit OOB. Colin found the many small parts to be a challenge. He says the kit has good fit and is very detailed, but you need to take your time with this build. 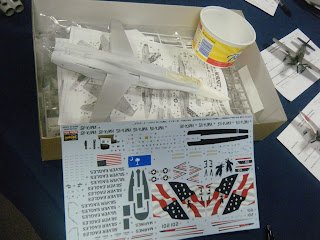 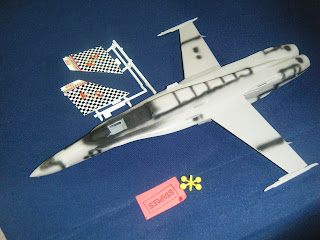 So, there were two in-work Hornet projects on the table. Ryan Tergeon and Nick Kessel had challenged each other to a build-off. So far there is no winner. I have info for only one model, and I think the top picture is Ryan's project. The 1/48 Hasegawa kit has a MAW resin nose, Quick Boost MERs, Blue Death" bombs, and a resin seat. If I have the pictures mixed up, I apologize.﻿
Posted by Unknown at 9:27 PM